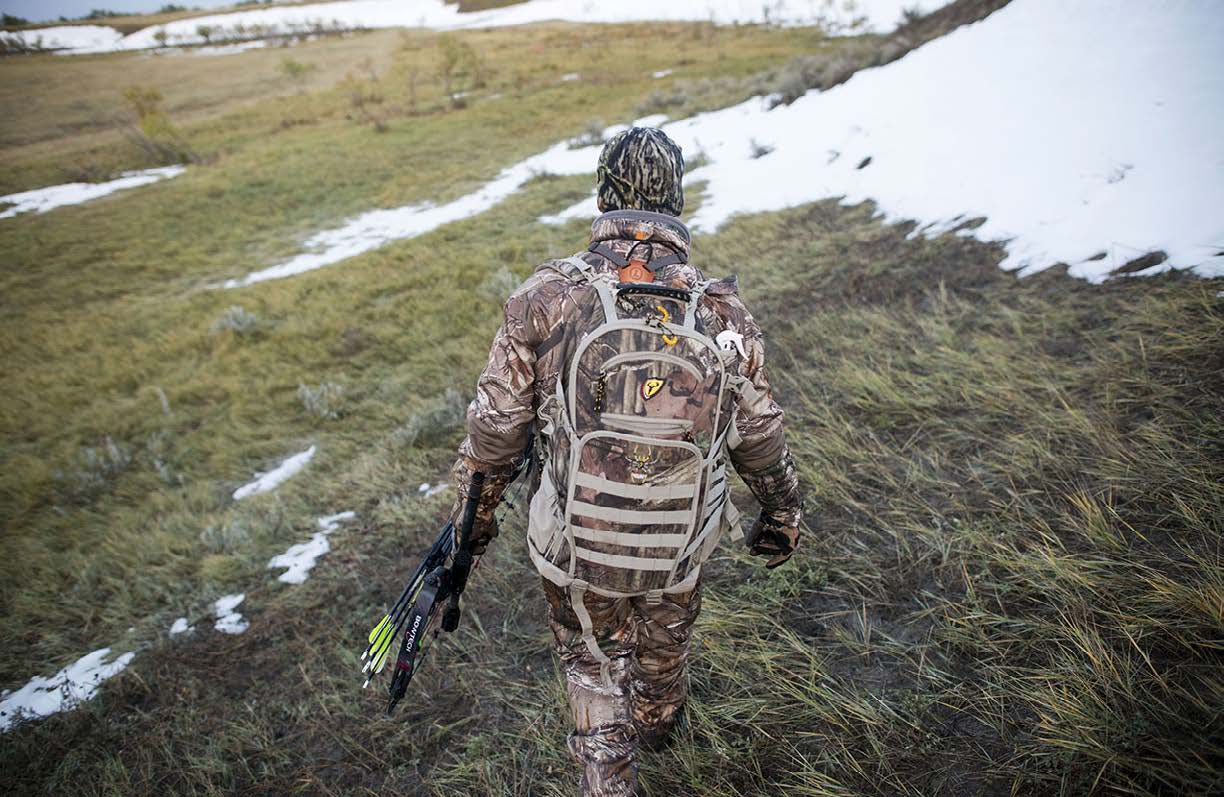 For the time of your bowhunting life, get aggressive with these big-eared deer

It was now or never. I charged ahead through the scattered junipers, disregarding the bedded fawn watching me make the maneuver. My focus was on the grunts emitting from an old buck I’d first encountered one year earlier. He’d also been taunting me for the last few days in a wide-open wheat field with a large doe harem. But a wintery onslaught with fierce winds drove the harem down into an adjacent canyon. Based on his behavior and the satellite bucks circling like buzzards, at least one doe in the harem was hot.

Positive I’d cut enough distance, I tucked into a juniper and waited. Then, I saw bits and pieces of the grunting buck through the branches. I drew just before he reached my opening. Mouth-grunting to stop him, I aimed and took the shot. It was by far the most aggressive maneuver I’ve made while deer hunting, and it yielded an old monarch mule deer.

Having grown up hunting Whitetails in the Midwest, my first few mule deer rut hunts treated me to a different type of hunting, and I’ve grown quite fond of it. Yes, deer are deer, but while mule deer have similarities to White- tails, I’ve found that they rut a bit differently. (At least, that’s so in cattle-ranch country where I’ve done all of my rut hunting.) How so? Let’s discuss.

First, I’ve observed dominant bucks gathering doe harems—as many as 15 to 20 animals in a group—then guarding them from swarming satellite bucks looking for a way in.

Dominant doesn’t necessarily mean that the harem leader has the largest antlers. He’s simply the oldest—or at least he’s the one with the biggest attitude. Unless his harem is pressured, he’s usually very predictable as compared to rutting Whitetail bucks. They are often here one minute and a mile away the next. Unlike ha- rem bucks, though, I’ve observed satellite bucks cruise between harems. So, dominant harem bucks are usually standers, and the satellites are roamers.

The scene is quite similar to how elk rut. Many suc- cessful elk hunters are very aggressive, often charging into the action when the situation allows. That’s how I prefer to hunt rutting mule deer, and I’ve found success in that realm.

Before we advance to tactics, let me address a loom- ing debate. Some folks say that mule bucks are dumb compared to Whitetails, while others disagree entirely with that viewpoint. Huge mule deer bucks don’t get huge by being clueless; that’s a given. I’ve certainly spooked a few really big bucks during the rut, so don’t think you can just walk up and shoot a buck at any given time. But I’ve also encountered bucks that could see me and didn’t care. If the doe(s) the buck is intent on doesn’t spook, the buck will usually tolerate your presence until the girls bolt. In my experience, when comparing White- tails to mule deer, I think muleys are more inquisitive.

They might offer a slightly longer window of opportunity in certain instances, but they’re far from dumb.

Now, I’ve had success with being aggressive on rutting mule deer, so let’s roll into some tactics that can potentially earn you an opportunity to draw your bow during the mule deer rut.

Given a mule deer’s natural curiosity, decoys are the perfect play in many instances, especially when a tra- ditional stalk won’t suffice because of a lack of cover.

Remember what I said about harem bucks nudging satellite bucks away? Well, get an antlered decoy like the Ultimate Predator and fake your way into a shot oppor- tunity. This is sometimes the only way to bowhunt deer living in a wide-open field far from any cover.

Here’s how to do it. Approach the harem from downwind using whatever cover is available. Get as close as the cover allows. One hundred yards or closer is ideal since this range infringes on the dominant buck’s com- fort zone. Slowly present the decoy to the buck when he’s not looking. If he doesn’t notice it, consider a grunt or snort-wheeze. I’ve witnessed bucks challenge one another several times with grunting and snort-wheezing. It won’t work every time but be prepared for a fast-un- folding opportunity when it does. Also, count on the buck circling downwind as he enters bow range.

As a caution, know that using a decoy is at your discretion and could become dangerous if the buck charges. Further, never use decoys when a firearm season is open, as the decoy could be mistaken for a real deer, potentially putting you in someone’s line of fire.

If you’re trying to intercept a cruising satellite buck, remove the antlers to make the decoy a doe. Bucks cruising during the rut are looking for does. If they catch one alone away from a harem, they play for keeps. If the decoy doesn’t get the buck’s attention, pitch him an estrus bleat. From there, he’ll see the decoy. If he comes, get ready. If he keeps moving, try to get ahead of him and present the decoy from another angle.

In a situation where multiple deer are in cover and rutting like crazy, sometimes you can charge right in. The buck I referenced at the start of this article was total- ly in estrus heaven. He was grunting almost nonstop, fending off other bucks and sniffing does. The scattered junipers provided security cover. He was completely comfortable there. So, when he was obstructed by cover, I disregarded the fawn that could see me and charged in. I hunkered down and got my opportunity only moments later.

When To Make A Move?

Situations like these aren’t very common, but they do occur. The difficult part is deciding when to make the quick move. I’d suggest letting the rutting chaos get well underway.

Then, have landmarks that you can reach one at a time whenever the deer are obstructed or distracted. You can’t always make the move all at once. As far as noise, you can likely get away with some if you sound somewhat like a deer.

You can develop a feel for when to seize the opportunity through trial and error. If your other ploys aren’t working, don’t be afraid to try this all-or-nothing move in the right scenario.

It has worked for me, and it could work for you, too. And in doubt, use a decoy like the Ultimate Predator for coverage.

In the early season before the rut, a bed- ded mule deer buck is liable to stay in his bed most of the day. He might stand periodically to browse or to adjust as the sunlight spills into his once-shaded bed. Regardless, unless he’s spooked, he’ll typically remain in that immediate area most of the day. This gives you the latitude to stalk very slowly and cautiously.

Rutting mule deer are less predictable. With colder temperatures and hot does on the loose, a bedded buck could get up and move anytime. So, if you’ve spotted a bedded buck that you want to stalk—especially if he’s alone—don’t waste time. Get the wind right, pick a route and go.

I did this on my first mule deer rut hunt back in 2013, and when I peeked over an embankment, the buck was only 23 yards away still bedded.

With the rut going in early November, I’m not sure he’d have still been there had I been slow. I made the shot and took that buck back to Wisconsin.

When To Be Passive

Of course, the aggressive tactics we’ve dis- cussed don’t fit every single situation. Sometimes that means you need to let off the accelerator just a bit. Let’s discuss a few situations when this is the case.

When non-target deer are between you and your target buck, you’ll typically spook them if you press on, and they’ll alert your buck to your pres- ence. In this case, hunker down and watch. Wait until they move out of the way and then continue approaching. Or, if your target buck moves to a more suitable position, reroute to circumvent the other deer and move in.

In situations where deer daily move between canyons and agriculture, look for tendencies in their travel routes. If you nail down a location bucks are consistently moving through, consider a stationary ambush — given an ideal wind direc- tion — either in the form of a treestand, natural blind or pop-up blind set against a hay bale or buried in tumbleweeds.

There might be more situations in which you should backpedal, but the final one I’ll note is when does in the harem have you pegged. Even if the buck is preoccupied and hasn’t a clue you exist, on-edge does can squelch your opportunity instantly. Don’t move a muscle.

If the wind is in your favor, odds are good that the buck will begin pushing the does around again and that they’ll forget about you. Or, given their inquisitive nature, they may walk your direc- tion attempting to identify you. The buck could very well follow and give you a shot.

Few things in bowhunting rival the rush of going after rutting mule deer bucks using aggressive tactics. Should you embark on a mule deer rut hunt this fall or in the future, you now have a few more tools to add to your bag. Although I can’t guarantee that they’ll work every time, I can tell you that they’ve yielded a handful of beautiful bucks for me. All you can do is try them out for yourself and see.

WHEN DO MULE DEER RUT?

In the northern area of the mule deer’s range—the Kansas plains and surrounding vicinities clear up into Canada—mule deer start doing rut things as early as late October. Most of the breeding I’ve witnessed oc- curs in the middle of November. It likely peaks between November 15 to 25. I don’t have science to back this; it’s just been my observation while hunting.

Moving south to Arizona, New Mexico and Texas, the muleys rut a bit later. Things might begin at the end of November, but the untamed action will come in the middle of December and cross over into January. This should help you time your hunt. For a closer estimate on timing, discuss it with a local biologist or game war- den in the area you’ll be hunting.