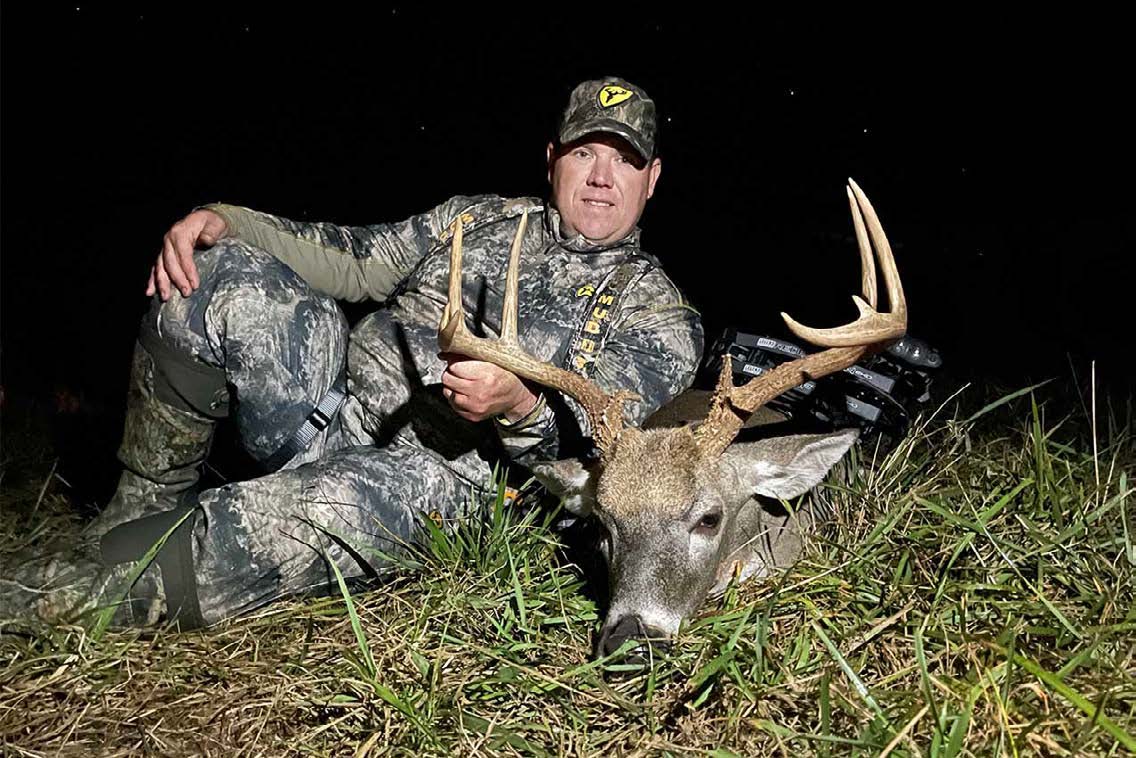 On the back deck of our condo that overlooked Table Rock Lake, my wife, son, and I sat around the patio table as we enjoyed our dinner. It was the last weekend in September, and our family had decided to relish a weekend getaway before cooler weather arrived.

The plan for the weekend was simple, a getaway to clear our minds of day-to-day life and its distractions. I enjoyed our weekend; however, I must admit that during each evening of our stay, I found myself unable to put down my cellphone for very long periods due to the excessive amount of trail camera notifications I was receiving from my Stealth Cam Fusion cellular camera.

Since the first week of August, I had become obsessed with a deer that I had named lazy brow because of the buck bending over one side of his brow tines during velvet. For two months, I became consumed with viewing photos of this wide ten-pointer as he and four other bucks made up an impressive bachelor group for the summer.

After our relaxing weekend trip, I knew returning to reality would not involve any hunting opportunities until the following weekend due to work obligations. Finally, on the evening of October 4, the preferred wind direction to hunt from a stand where the bachelor group of bucks had been living throughout the summer was occurring. At 2:30 p.m. that Sunday afternoon, I climbed into a 15’ ladder stand facing a wood line where the bucks typically entered the field. From previous trail camera photos, I knew that along the edge of a fence line, they were feeding on freshly fallen white oak acorns every evening. As expected, it wasn’t long before they entered the field to feed for the evening. At 5:30 p.m., two of the bucks from the bachelor group I had on camera entered the field. After twenty minutes of the bucks feeding, an array of does, and three small yearling bucks, the lazy brow buck appeared at the fence line sixty yards in front of my stand location. Wasting no time, I grabbed my Bear Archery Redemption EKO bow and moved it into shooting position. Two small bucks to my left caught my movement when I moved the bow to position myself for the shot and began stomping their feet in response. I moved my eyes back and forth from the stomping immature bucks to the lazy brow buck, who had now jumped the fence and was walking directly towards my location. I quietly prayed, “Lord, let the two bucks move on and let me get a shot” at the buck I had put on the top of my hit list.

Finally, after what seemed to be an eternity, the younger bucks turned and walked away. At that moment, the shooter buck was now at twenty-five yards. I drew back my bow and came to full draw. When I was fully drawn, the buck turned broadside and stopped. I sent an arrow through both lungs and watched my hit list buck run into the timber. A five-and-half-year-old southern Missouri buck that measured nineteen inches on his inside spread was down!

What is a Bachelor Group of Bucks

A bachelor group of bucks travels together from early spring until the fall. The groups typically consist of three to four bucks, yet as many as ten to twelve have been noted to spend the summers traveling together. However, on average, the number is under five.

Bachelor groups stay together for different reasons. Some say it is for survival; a group can fend off predators better than traveling alone. Others claim it is a learning experience for bucks. A bachelor group often consists of three to four mature bucks, with one dominant buck being part of the group. The less dominant ones learn from the more mature ones for future territorial purposes. Smaller bucks in the area will eventually form their own groups and separate from the mature bucks.

I was intrigued when monitoring the group of bucks on my own hunting property because three out of the five from the bachelor group were three to four-year- olds. The dominant buck of the group was lazy brow, aged five and a half years old.

On average, bucks remain together until mid to late September or until velvet has been shed; at that time, bucks begin to expand their range, and the bachelor group becomes broken apart. 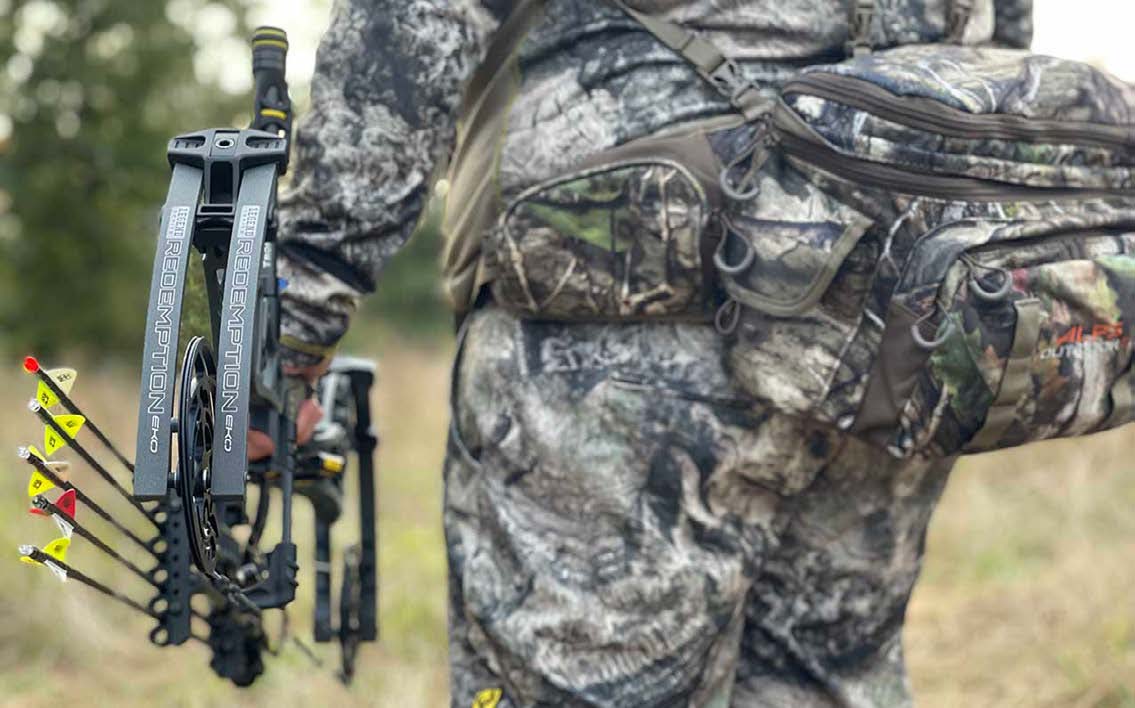 In August, a buck’s testosterone levels rise, leading to their antler’s hardening. Once antlers are hard and velvet is shed, they begin separating from each other and spreading their daily travel patterns. Their new routine revolves around asserting competition for dominance and, eventually, the breeding season, commonly known as the rut.

The break-up of bachelor group bucks typically occurs during the last two weeks of September. However, they can remain grouped into October. When a hunter can find bucks who are still running together during the first week or two of October, they likely can capitalize on a mature buck while their daily travels are still relatively easy to pattern.

At the first mention of bachelor groups in October, one may picture cool weather, colorful leaves, and pre-rutting bucks. Yet, the first two weeks of October can often continue to produce summer-like temperatures. The feel of summer can sometimes slow down the breakup of groups of bucks.

In the Midwest, the first week of October can yield temperatures in the upper eighties to low nineties for a high temperature. In fact, on October 4th, when I harvested my buck, the high was eighty-eight degrees, making the first two hours of the evening sit miserably hot. I toughed it out and hunted anyway because my trail camera showed the lazy brow buck and two others still traveling together in their summer-like pattern. I knew if I was going to get a chance at harvesting the buck, I needed to get it done as soon as possible.

In late September, throughout the first few weeks of October, it is vital to keep trail cameras running to capture the stages of bachelor group bucks. During the last week of September, my family and I were on our weekend vacation. Most of the bucks showing up on my Fusion X cellular camera had lost their velvet. After the shedding of velvet, typically, it isn’t long until bucks disappear from their summer patterns. Another important note from my trail camera photos was that the group of bucks I had been monitoring throughout the summer had narrowed to three. With the lazy brow being noticeably more prominent than the other two, I knew he was the dominant buck in the area and was standing his ground until the last buck was gone.

On that warm early October evening when the first two bucks entered the field, I knew in my heart that the chances of seeing my hit list buck were high. With the two younger ones still running together, I realized the more mature buck had to be nearby.

When the opportunity presented itself, and I let my arrow fly, all the hard work spent throughout the summer came together, and an October bachelor group buck had fallen.

A week and a half after harvesting the mature ten-pointer, the other two bucks went their separate ways for the fall, assuring me that I had made the harvest at the right time of the year.

To monitor bachelor groups throughout the summer until the days when velvet begins to shed, the Stealth Cam Fusion X can send information directly to a cell phone by using the Stealth Cam Command App.

The Fusion X provides high-quality 26-megapixel images and 1080P videos transmitted to the Command App within minutes. The Fusion X’s trigger speed of 0.4 seconds captures what the hunter needs to see each time.

The author credits the Fusion X for providing critical information when bachelor group bucks were still together and the steps leading up until the eventual fall break up, weeks after he made the harvest on a mature buck.

The Bear Archery Redemption EKO compound bow features a 31” axle to axle measurement, making it the ideal bow for hunting from the ground or in a treestand as when the author harvested his early October buck.

Powered by Bear’s patented EKO Cam System for ultimate adjustability, the Redemption EKO fires arrows at a blazing speed of up to 343 FPS. The EKO technology allows customized let-off from 75%, 80%, 85%, or 90%. With the Redemption EKO being easy to hold at full draw, the author could stay drawn until the shot presented itself without spooking other nearby deer.