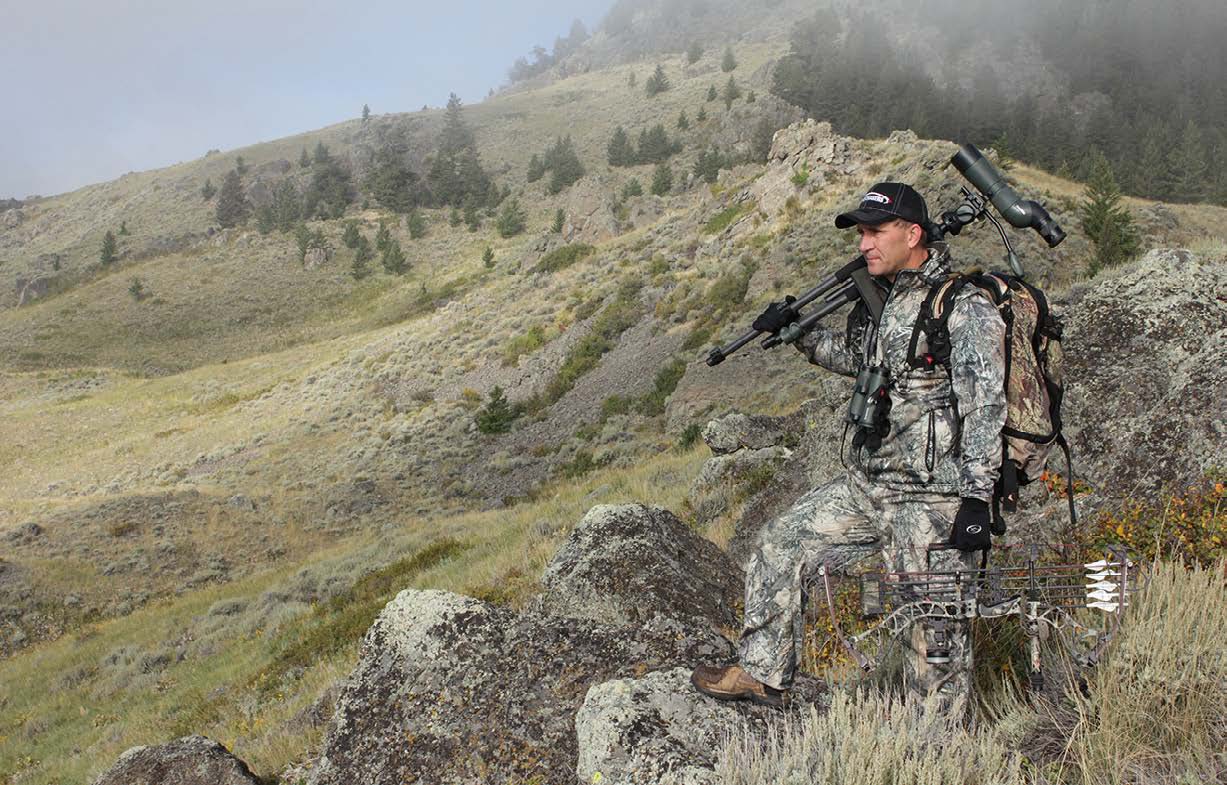 Sitting in a ground blind, bow ready, I was confident that my September 1st deer hunt would end within the first two hours of opening day. As the clock hit 11 a.m. however, I hadn’t even seen a buck. The mercury neared 100 degrees, and I was sweating and thirsty. It was time for Plan B.

The big blacktail buck I’d been tracking all summer on trail camera failed to show up. I knew there were no predators in the area that would cause a shift in its pattern. That left only one logical explanation…the buck had stripped its velvet.

Moving my ground blind a few hundred yards deeper into the brush, my intent was to get closer to the buck’s bedding zone and intercept it as it moved from bed to feeding area that evening. With less than 10 minutes of shooting light, the record-class blacktail showed up, walking right by the blind. The shot was simple, and soon, I was admiring the target buck.

A closer look also revealed a rack that had recently been stripped of its velvet. I was lucky, because once that velvet is stripped, mature blacktail bucks often turn nocturnal.

Whether you’re bowhunting or you’re holding an early-season rifle tag, hunting deer through the West in hot, dry conditions has become the norm in recent years. But don’t let those challenging conditions discourage you, because there are only so many days in a season to fill a tag.

Summer scouting in the early season is a deer hunter’s best move, be it by physically being in the field as often as possible or relying on trail cameras to convey valued information. Since a mature buck can shift the time that it moves and even the trails it travels, as soon as the velvet is stripped, the key is scouting a general area to locate a buck.

With the shedding of velvet comes an increase in testosterone, which means bucks start gearing up for the pre-rut. In early September, a buck’s behavior shifts from being active and visible in daylight to moving under the cover of darkness. Often, a buck will use different trails than it did all summer in order to avoid predators.

So why scout if bucks turn nocturnal so quickly and start using different trails? Because seeing where a buck is during the summer still gives you a starting point come the season opener. Scouting gives you the knowledge that a buck is in an area and it provides you a specific starting point to confidently begin your hunting season.

Once a mature buck sheds its velvet, it stays in the same area where it spent the summer and will normally remain there through the entire month of September (or even longer if bad weather doesn’t drive it out.) The difference is that now, bucks seek cover for safety.

Bucks living at high elevations often seek relief from the heat by moving into shade, bedding in cool dirt, and crawling into rocky outcroppings to benefit from the cool, ambient air. These open-country bucks can be easy to find but very difficult to get within shooting range. That’s because they bed in a position with an optimal view and the wind in their favor.

On particularly hot days it’s common for a buck to bed multiple times in multiple places. The purpose of changing bedding locations is to seek cooler temperatures and avoid direct sunlight. When scouting one summer morning, I watched a big mule-deer buck re-bed seven different times over less than three hours. Each time, a shifting sun consumed the shade, and each time the buck moved uphill to seek more shade and cooler, rising thermals. A couple of times the buck aggressively pawed the dirt before bedding to expose cooler soil to lay in.

As thermals stabilize or even cease at lower elevations, shade alone may not be enough to offer a buck relief from the heat. That’s why they’ll often move during the mid-morning hours, with the goal of getting higher in elevation to benefit from increased airflow. You can search for bucks moving through forest fringes or tall sagebrush and other cover in an effort to gain elevation. Often, they’ll travel all the way to the top of a ridge, bedding in the shade where the wind is strongest and the temperatures the coolest.

Once you know where a buck lives and you understand why it occupies an area, the next challenge is getting a shot opportunity.

Whether hunting early-season mule deer in the Rocky Mountain states, Whitetails in the region’s hills, or Columbia blacktails in their challenging habitat of the Cascade Range and coastal mountains, you need to focus on the shade. When it’s hot, many hunters spend only the first and last few hours afield, but the hottest part of the day can be productive when hunting in the shade.

Situating treestand and ground blinds near trails, or between known travel routes and bedding areas, can be a good move. Treestands are still an underutilized tool for many deer hunters in the West, and they’re a great tool for increasing visibility as well as keeping your scent off the ground.

While deer throughout the West occupy high elevations in respective habitats during September, all three species also thrive in lowland terrain. From rolling hills to river bottoms, farmlands to marshes, and even dense forest, all three deer can be hunted here. When hunting these habitats, the approach you’ll use is different than when targeting them at higher spots; usually amid more open habitats.

In thick habitats, search for everything deer need to survive in one area: food, cover, water. Often, deer get the water they need from the green vegetation they eat, but in hot regions or during drought-like conditions, deer need to travel for water.

Riverbanks and creeks are obvious places to search for deer coming to water, as are the edges of ponds and small waterholes. Springs, seeps and tiny rills are also places where deer may hit, but these sites can be tough to find. That’s another reason why scouting is important.

In agricultural habitats, hit the brushy tangles between the feeding zones and the river, or at the bases of hills. This is where the most cover and shade are, offering protection and relief to deer in the hot days of early fall.

Stalking through a dry forest is extremely challenging, noisy, and it quickly educates deer, but it can still be an effective way to hunt in hot weather. Instead of taking off walking and hoping to bump into a deer in the forest, go about it more cautiously and with purpose.

Rely on quality binoculars and a spotting scope to dissect the terrain and locate deer as you slowly move. Search for parts of a deer, not the entire animal. Look for a moist, shiny black nose, white strips on the rump, a horizontal back or belly line, and the flicker of an ear or tail. Once a buck is located from a distance—and without it knowing you’re there—you can plan your next move. I’ve hunted timber in this way and have taken upwards of three hours to cover 200 yards.

For archers, one of the greatest deer hunting challenges is closing the deal on an early-season buck via spot and stalk. Realize it may take several hours, even days, for the conditions to be right in order to even stalk within shooting range of an early-season buck. Watch the buck and monitor the wind to see when you can attempt a well-planned stalk, and from what angle.

If you’re in a situation where there’s no hope of pulling off a stalk, and time is limited, consider calling. This time of year a distressed fawn call can bring in curious bucks. It will often attract does, and sometimes bucks follow them in to check out the commotion.

If a buck is moving to a bedding area that you can’t get to, try approaching from another angle well before daylight. Be in position for the buck to move toward you rather than you following it. It’s very difficult to catch up to a buck on the move, especially if it’s moving uphill, along with the thermals that carry your scent toward the deer. Be sure to monitor wind direction at all times, and if it changes and moves toward the deer, get out and try again from another angle, or at another time.

Finding deer in hot weather is one thing, and hunting comfortably and safely in hot weather is another. Having hunted many western states during the hot months, I’ve found the most valuable tool to keep me going is water. A hydration pouch with a tube extending through the strap of your pack is the best thing to keep you hydrated. It’s surprising how much water you’ll actually drink with a full hydration pouch and a straw dangling by your mouth, versus carrying a little water bottle that you don’t want to take your pack off to access.

When you head afield, plan to hunt until dark. You can take a quick nap during the hottest part of the day, but don’t waste time hiking back to camp. Load your pack accordingly, bringing along enough food and high-energy snacks. Archers can toss a pair of thick wool socks into their pack so that when you do commence a final stalk on a dry ground mule deer, you can slip your boots off, put the wool socks on and proceed in silence.

Invest in some high-tech, lightweight clothing as well as lightweight boots or even athletic shoes. Toss in a knife and a sharpener and be ready to bone out the meat and pack it out. Include a couple of deer bags and be prepared to pack out the meat as soon as possible to avoid spoilage.

This September, don’t let hot, dry conditions squash your deer hunting dreams. The bucks are out there; you just have to figure out how to get close to one without it knowing you’re near. Thus lies the challenge, and addiction, of deer hunting in hot weather.

Scott Haugen is one of North America’s most accomplished outdoor writers. With 17 book titles, more than 3,500 articles, and over 12,000 photos having been published in hunting and fishing magazines around the world, Haugen has been writing full time for over 20 years. The former host of over 450 TV shows, his programs appeared on many major networks, including Netflix, Amazon Prime, ESPN, Outdoor Channel, and more, in over 50 countries. A former high school science teacher with a masters degree and specializing in biology, Haugen spends more than 250 days afield hunting, fishing and photographing wildlife.

View all posts by Scott Haugen