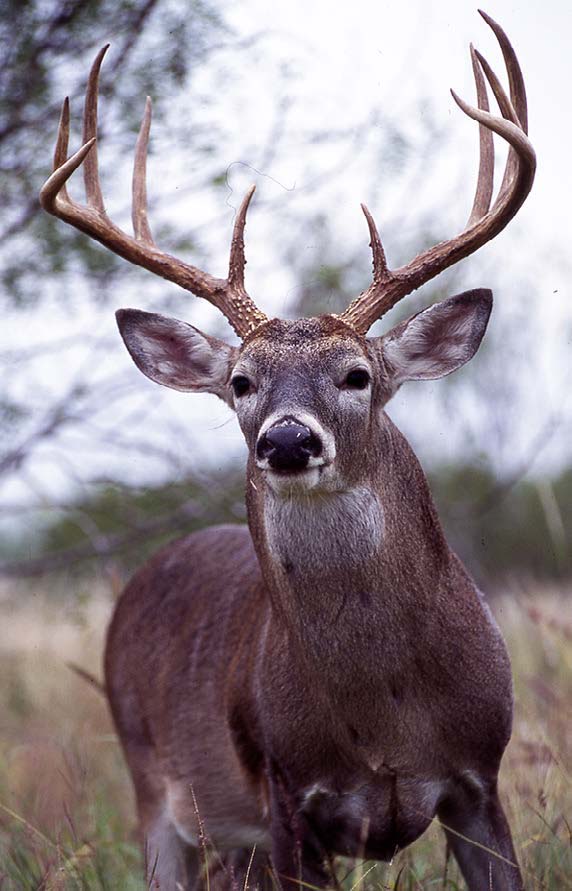 I spend a fair amount of time lurking on hunting and shooting social media pages. To me, they are a guide as to what’s on sportsmen’s minds and what is of interest in the outdoor community.

While many of the regular posters on these pages are gun and shooting enthusiasts with a vast knowledge of all things that go bang, there is another group caught up in many of the old myths and wives’ tales that plague shooting and hunting. In the same post, you can get a “Goldilocks-porridge” review of the identical bullet on a Whitetail deer. For one hunter it was way too explosive. For the next, it was way too tough. And for the final hunter, it was just right. The lack of knowledge surrounding hunting bullets can be staggering, so let’s take a look at the most common styles and how they perform.

There are three common styles of hunting bullets available today, with a number of variations within each group. They are cup and core, bonded, and mono-metal bullets. 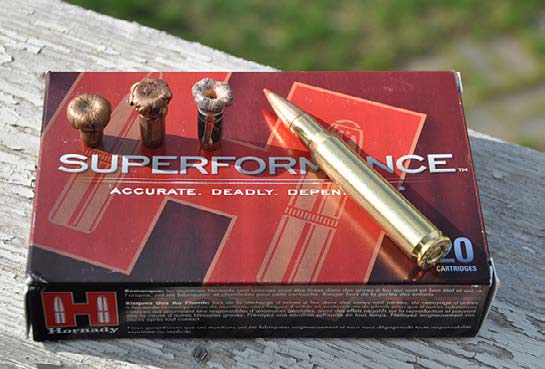 When jacketed bullets first hit the scene, they were all of cup and core construction. What this means is that the metal jacket, typically constructed of a copper alloy known as gilding metal, is drawn into a cup, then the lead core is placed inside that cup. There is no bonding of the lead to the jacket and the two metals basically react independently upon impact. With high-velocity impacts, these bullets can be quite frangible and fragment extensively. Expansion can be somewhat controlled by jacket thickness, the size of the opening in the nose, or by the material used at the tip. Problems begin, however, when you start driving these bullets at high speed and shots are at close range. In these cases, fragmentation is extensive, and it often results in extensive damage to the meat.

Part of the love for cup and core bullets comes from the fact that they are the most inexpensive. However, when manufactured to tight tolerances (as in the case with match and long-range hunting bullets) they offer superior accuracy over bonded and mono-metal bullets. Virtually all of the top target bullets are of a cup and core construction. Cup and core are also ideal for long-range hunting, since they will expand reliably at much lower velocities than bonded and mono-metal bullets. A mono- metal bullet, for example, requires impact velocities above 2,000 feet per second for reliable expansion, while some of the higher-quality long-range cup and cores will reliably expand and penetrate all the way down to 1,600 feet per second. While cup and cores were starting a fall out of favor a decade ago, they have seen a real resurgence as the popularity of long- range shooting grows. 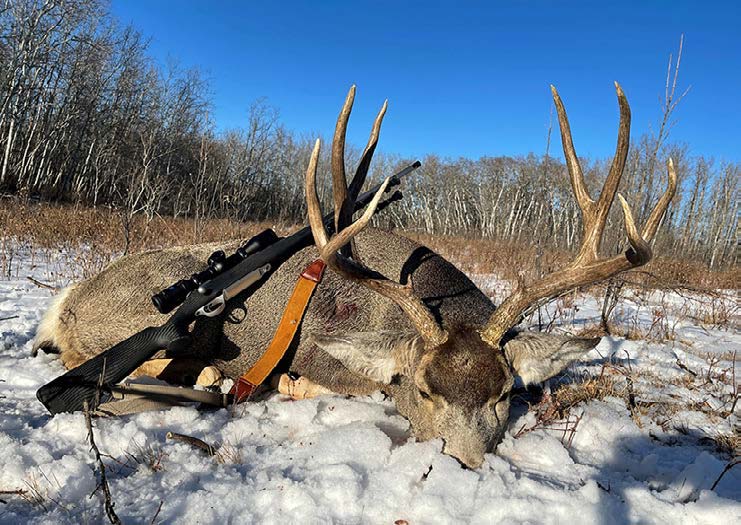 The first jacketed bullets date back as far as the 1880s and, at the time, they were a big improvement over solid lead projectiles. As the demand for faster and flatter shooting cartridges swept the hunting world, it became obvious that better-constructed bullets were needed.

John Nosler answered the call in 1947 with the Partition bullet. Rather than having a single lead core inside a jacket, this bullet has a horizontal partition that allows the front portion of the bullet to expand rapidly upon impact, while the solid rear portion remains intact and ensures deep penetration. For its time, the Nosler Partition was indeed revolutionary. It was the first bullet well-suited to a wide variety of game from deer to moose. On thin-skinned game like deer, the rapid expansion in the front section ensured extensive tissue damage. On heavier game, the deep penetrating characteristics of the solid rear section allowed a good portion of the bullet to penetrate deeply. Partitions are still in use today. If there was one knock against them, it was that many rifles would not shoot tight groups with them, but for a mid- range hunting bullet, they were plenty accurate enough. 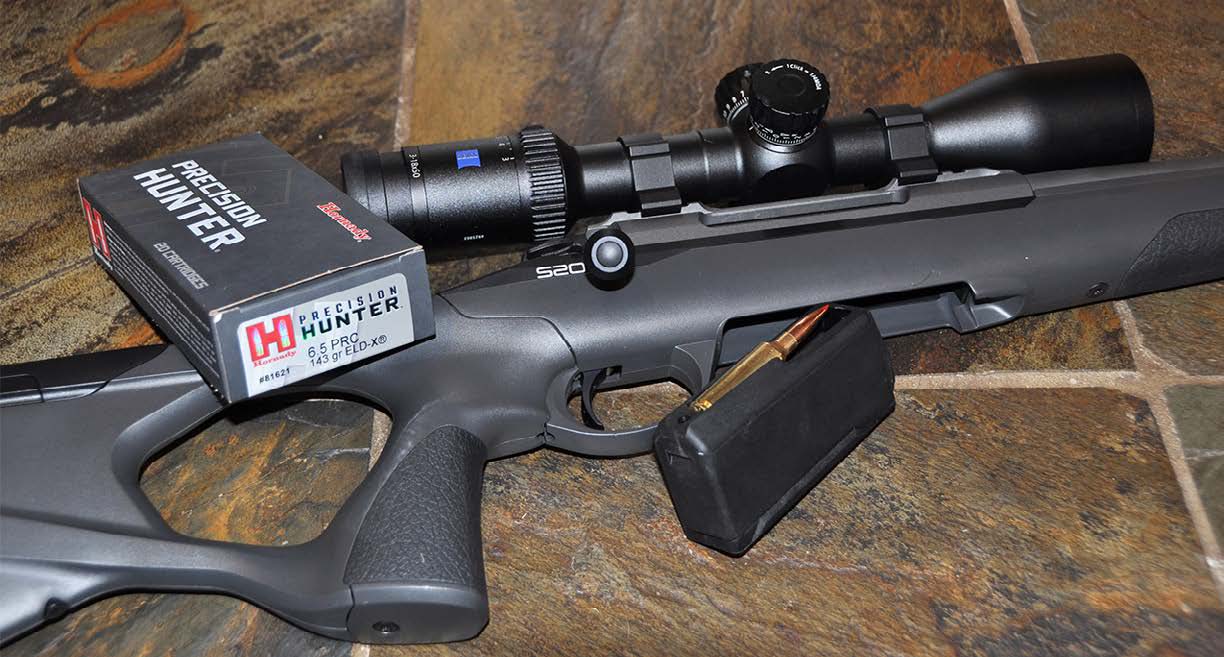 Unlike the original cup-and-core bullets, the lead is actually chemically bonded to the jacket in bonded bullets. This offers better weight retention, as the lead core and jacket expand together, rather than independently, even with high-velocity impacts. These bullets typically retain in excess of 90 percent of their weight. Impact velocities need to be kept above 1,800 feet per second, however.

The newcomers to the bullet game are mono-metal bullets. As the name implies, they are constructed from one type of metal, usually copper or guilding metal, and they are the king of weight retention and penetration. These are not the non-expanding solid bullets often associated with African dangerous game. They are instead a solid copper bullet with a hollow point, designed to expand very rapidly upon impact, even on deer-sized game.

Most of the newer mono metals have a polymer tip to further aid in expansion. Mono metals are extremely tough and hold together well with high-velocity impacts. But, on the downside, they do need impact velocities in excess of 2,000 feet per second to expand and penetrate reliably. Tales of mono metals being so tough that they pencil right through animals at close range are ridiculous, and they demonstrate a poor understanding of physics. If you are going to see expansion problems with a mono metal, it will be when impact velocities dip too low. At high speed, they expand rapidly and violently.

The first common myth you’ll read about on the internet is that larger calibers do more meat damage. You’ll hear tales of a 300 Win Mag blowing a basketball-sized hole in a deer. Sure, a larger caliber makes a larger initial wound channel, but bullets like the more frangible cup and cores, which fragment as they pass through tissue, are going to cause far more damage to meat than a bullet that retains its weight well.

It quickly becomes obvious that you need to select a bullet style for the type of game, range and velocity you are shooting. With proper bullet selection and placement, meat damage from a .375 H&H can be significantly less than that from a .25-06.

Often, professional hunters in Africa will have their clients shoot smaller animals with the 375 H&H with solid bullet to prevent excessive damage to capes destined for a taxidermist. Shoot those same animals with a small, fast cup and core and you could likely put your fist in the exit hole. 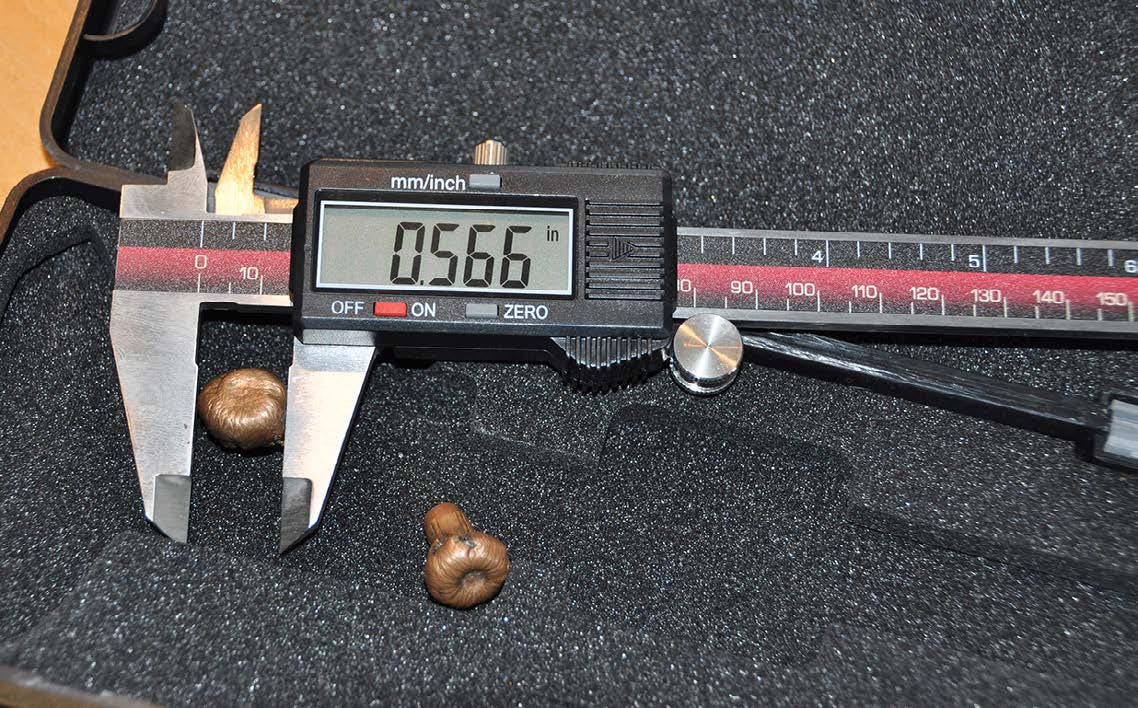 What about how rapidly a bullet kills an animal? I laugh when I read people going on about how every animal they’ve killed has never moved from the tracks it was standing in. Sure, some animals fall on the spot, but far more will run off a short distance before expiring. If you haven’t experienced this, you haven’t hunted much. When animals drop on the spot, it’s typically from a disruption to the central nervous system as with a brain or spine shot. Even an animal shot in the shoulder will often drop right on the spot but rarely is death instant.

With soft-tissue hits in the lungs and heart, it’s common for the animal to run a short distance as it bleeds out. That bleed-out happens more rapidly with bullets that fragment, like the cup and cores, as there is far more tissue damage than from a bullet that retains the bulk of its weight. Animals shot in the lungs with a bonded or mono-metal bullet will often run a considerable distance, as the initial tissue damage is not as extensive. These bullets are no less lethal, but death often takes a second or two longer to occur. A deer on the run can cover a lot of ground in two seconds.

This is partially where the myth of mono metals penciling through came from. These high weight-retention bullets still expand up to two times, but as death is often not as dramatic, some misinterpret this as the bullet not expanding. These bullets often leave small exit holes as well, because there is not a field of shrapnel associated with them that rips large holes in the far hide. Often, they leave an exit hole no bigger than your finger. Again, this is often misinterpreted as a lack of expansion, but the truth is, a 30-caliber bullet that has expanded to twice its original diameter will only be about the size of your baby finger in diameter. Exit hole size is no indication of bullet expansion, but many incorrectly interpret it this way. 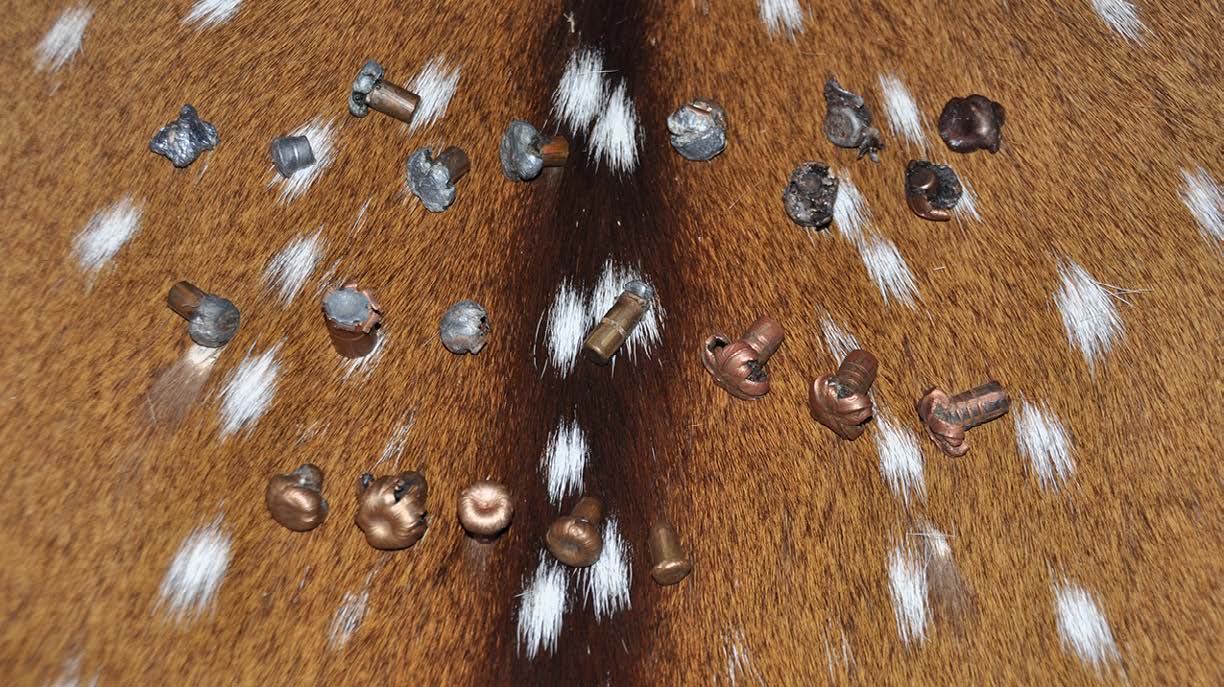 So, what about long-range shooting? There is a school of thought that lightweight/high velocity bullets are the flattest shooting and in the short haul they are. However, a heavier bullet of the same style, even shot at a lower velocity, will eventually outperform the lighter one. 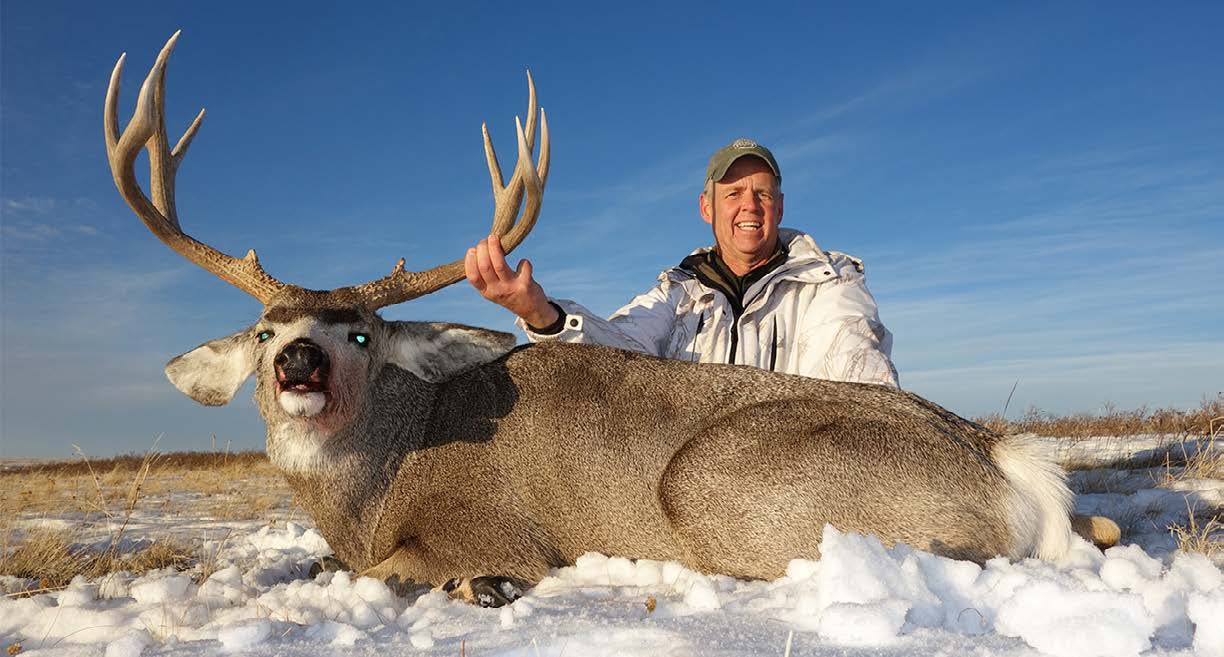 Bullets with a higher ballistic coefficient are also less affected by wind drift, once again due to their shorter flight time. The faster a bullet gets to the target, the less affected it is not only by gravity but also by wind, a real consideration when shooting at longer ranges. It doesn’t take much of a breeze to throw a bullet several feet off course at extended ranges. Shorter flight time also means a higher impact velocity and higher energy on the target animal, again, very critical components of ethical long- range shooting. People often incorrectly believe that heavier bullets are better in the wind, but this is only true if they also have a high ballistic coefficient. A lighter bullet with a high ballistic coefficient will actually deflect less in the wind, than a heavier one with a lower ballistic coefficient launched at the same speed. This is a difficult concept for many people to grasp as well.

With all this said, if you never plan on shooting beyond 200 yards, virtually any hunting bullet out there will kill a deer when properly placed. There’s no need to spend the extra money on premium bullets or ammunition. But, if you start extending the ranges you want to shoot at or are looking for a bullet that will double for moose or elk, then you will want to consider something higher quality and possibly of different construction. The real key is understanding how bullets perform in flight and upon impact, then selecting one that best suits the conditions you will be using it in.