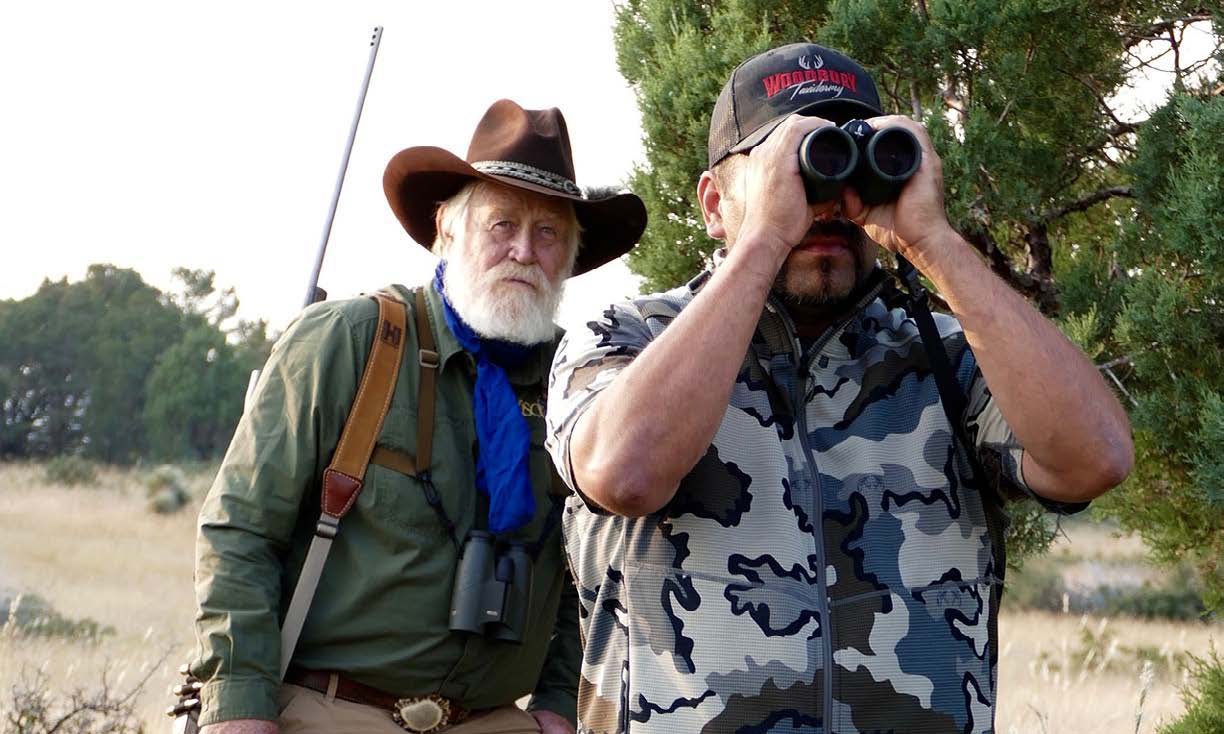 The ebony-beamed, ivory-tipped 6×6 bull elk turned and started walking away. “We can and will do better,” whispered Mescalero Apache Reservation’s hunt guide James Adams. Then, James again blew his cow call. Close by, four more bulls started bugling. In the distance, bulls bugled at every point on the compass.

Near the end of a long valley, 500 yards away strode an enormous bull. James suggested, “That’s one we’ll hopefully get to see closer.” Back at the vehicle, he add- ed, “We can drive parallel to him. Better yet, maybe we can get ahead of him. If we do, we’ll try to call or wait.”

Unfortunately, we were not able to catch up with the monstrous bull.

Later that morning, Darrin asked, “Any idea how many bulls we’ve seen? Certainly, no way of telling how many we heard!” He then continued, “I’ve hunted elk a fair amount, as well as guided for mule deer and elk in Utah. I have never seen nor heard anything like here on the Mescalero! This is a dream come true!”

Corey Mason and I introduced the Mescalero Apache elk hunt from the stage at the DSC Foundation’s first gala and fundraiser in 2021. When the auctioneer’s gavel dropped, the hunt winner was called out: “Sold to inter- net buyer Darrin Rhodes!”

The evening before our hunt, while enjoying a delicious meal and hunt orientation, we learned that our guide was James Adams. Darrin would be hunting a trophy bull, plus a management bull. I would be after a management bull, an older bull with no more than four points on one side, or a “freak,” meaning a bull with antlers coming off at an odd angle.

The first morning we glassed 44 bulls and heard more bugles than we could count. Before heading back for lunch, James suggested, “I want to check an area where one of my past hunters took a 400-size bull.” James said this bull was with a younger one that was huge and in the same area where he saw a 5×5 that he thought could go 340 or better.” Over pre-dawn breakfast, I learned that Darrin, like me, loves big 5x5s! Arriving in the area, we walked to several glassing points, saw more elk, heard many more, but could not find either of the two bulls James had told us about.

Our afternoon mirrored the morning hunt. We saw lots of bulls, several “almost” but no “shooters.” That evening back at camp, we “ooohed and aaaahed” over numerous impressive bulls at the skinning shed, including some monster 6×6 bulls. However, the one that caught my attention more than others was a massive, wide, long tined 5×5. I strongly suspected he would score 340 B&C or more!

That night like all nights at the Inn of the Mountain Gods, I fell asleep listening to elk bugling just outside my door.

The morning’s hunt was a repeat of the day before.

There were lots of impressive bulls, and so many bugling elk that unless they were really close, it was difficult to discern one from the continuous bugling of many.

After lunch our guide explained, “At the end of this ridge is a waterhole; there should be elk there. As the afternoon progresses, we need to be overlooking the waterhole and the valley beyond.” Our cameraman for “Trijicon’s World of Sports Afield,” Jeremiah Bennett, nodded approvingly!

James shook his head in a negative manner and kept walking. Darrin was smiling, saying, “I’ve been on a lot of elk hunts, but nothing like this. Many places I have hunt- ed all four bulls would be in trouble!” I agreed!

“You’re glassing way too far away and way too high for this flatlander. You’re making me nervous,” I told them.

James laughed. A few minutes later we were looking down on the waterhole and the valleys below us.

Here’s what James described: “A big 6×5, a bro- ken-horn, and a bull with a regular antler on one side and the other growing out of the middle of his forehead.

If the broken antler bull was intact, he would be one to take, likely would go better than 370 B&C. Shame he’s broken,” said James. Then he added, “Larry, the bull with the misshaped antlers is a management bull, if you’re interested.”

I was. But therein lay a problem. I had left my .300 Remington Ultra Mag, Remington Model 700 topped with a Trijicon AccuPoint scope and loaded with Hornady’s Precision Hunter 220-grain ELD-X ammo back at the vehicle. I personally built the rifle at Remington’s Ilion, New York factory when I was the hunting editor for Shooting Times magazine in 1998. I had no intention of shooting until after Darrin had shot a bull. But things change…so James headed back to the vehicle to get my rifle.

While watching the massive weird-antlered bull, I noticed Darrin was really eyeing the huge 6×5. His rack was missing his second brow on one side which classi- fied him as a “non-trophy.” The auction package included a trophy and non-trophy bull tags. One of the fabulous things about hunting the Mescalero Apache Reservation is that New Mexico’s state regulations do not apply.

“Love that 6×5, long beams and points. If James will allow, I’d like to take that bull,” Darrin stated. The management bull which had held my interest disappeared over the distant ridge, just as James arrived with my rifle. Thankfully the big 6×5 stayed with his cows.

I mentioned, “Darrin really likes the big 6×5 and would like to take him if you give him the OK. We’re quickly running out of light, but we’ll get what we can on cam- era.” Moments later Darrin was set to shoot when James directed, “When he clears that last cow.” That’s when the bull stepped clear. Darrin squeezed the trigger on this Christiansen Arms.300 Win Mag loaded with Hornady ammo. The solid sound, “whomp!” left no doubt that the bull was well hit. A few minutes later, we stood at the bull’s side congratulating Darrin on a great shot! If the bull looked huge alive, in death he was even bigger!

After concluding TV needs and photos, we field- dressed the bull via a winch on James’ pickup and load- ed the bull. It was one of the easiest elk recoveries I ever helped pack out! Then James took Darrin’s bull to the skinning shed, where the bull was appropriately admired and taken care of.

That night a cool front blew in. Elk outside my door bugled all the more!

In the morning James mentioned, “We’re headed to a canyon that splits three ways. I hunted there two weeks ago and saw several management bulls as well as an absolute monster 6×6.” Darrin added, “Larry, I shot a great bull yesterday. If you see a management bull you want, please take him. If a monster 6-by shows up, I‘ll go after him!” To me, it sounded like a perfect plan.

At first light we parked at the mouth of the three- pronged canyon. We walked a hundred yards before James started blowing his cow call. Several bulls responded immediately. All were close. I loaded a 220-grain Hornady ELD-X Precision Hunter into my .300 Remington Ultra Mag and cranked my Trijicon variable power scope down to four-power. I suspected any opportunity would be close.

I moved to a forked pine to get a solid rifle rest. James cow-called again. A 5×5 charged in. He stopped 30 paces away. Next came a 6×5; it was another impressive youngster. To our right we could see three more nice bulls. We moved deeper into the canyon. From ahead and above came a deep, gruff bugle. James motioned me forward to where he thought the bull would come from. I sat down and got into a solid rifle rest position with my elbows on my knees. Following James’ next “chirp,” a bull bugled, then broke cover running toward us. He came quickly. He had five points on his left and four on his right. His beams were long and wide. He was big and old.

“Take him!” whispered James. I placed the AccuPoint’s green dot on the bull’s chest, let out what breath I still had and started squeezing my rifle’s Timney trigger, which was set at 2 ½ pounds. I knew Jeremiah had his camera on the action in front of us. Thanks to my barrel being ported, I saw the bullet’s impact. The bull ran to the right and stopped. I shot him a second time, even though I knew the first shot was fatal. Bull down!

At the bull’s side I accepted congratulations from James, Darrin and Jeremiah. My bull’s antlers were wide and long, a big mature 5×4. A great bull! A quick check of his teeth revealed he was likely 10 years old or older. I could not have been more pleased!

We took photos, finished all we needed for an episode of “Trijicon’s World of Sports Afield” and later “A Sports- man’s Life,” the weekly CarbonTV.com show I co-host.

Following that, we thankfully had another easy pick-up and pack-out.

That afternoon we headed to where James’ brother had seen a really good and interesting 6×5 bull with long tines and matching “kickers” on either side near the base of the fourth point. We stopped the vehicle and started glassing. I kept telling James, “Don’t glass so high up! Find one lower!” He laughed and continued glassing the crest of the mountain.

“There are four good bulls near the top of the mountain, including the one with matching kickers,” James reported, switching his binoculars for a spotting scope. Twelve bulls were bugling in the huge bowl just below the crest we finally achieved. An hour into our stalk, we were almost where we needed to be. As we started to make a move on “the” bull, a herd of wild horses appeared. They snorted and spooked, then ran directly toward Darrin’s bull. Thankfully they ran between the bull and the bluff we were on.

It took fifteen minutes to get to Darrin’s downed bull. The closer we got, the bigger the bull “grew”! His rack was tall, wide, massive, long tined, with darkly stained beams. They were complimented by polished ivory tips, and oh yes, those matching kickers! Hearty congratulations followed! We finished filming all that was necessary for “Trijicon’s World of Sports Afield” and “A Sportsman’s Life,” then did still photo- graphs. That task completed, James field-dressed the bull.

It was almost dark. Getting the bull down the mountain was going to be a daunting chore. There was no way for an easy pack with this bull. Thankfully, James’ brother arrived on an ATV. Still, there was no easy way to get the bull off of the mountain. It was nearly midnight before the crew got Darrin’s bull to the skinning shed.

Our hunt on the Mescalero Apache had been successful in many, many ways, including gaining new friends, seeing many massive animals, and making memories to last a lifetime!

Professional wildlife biologist, outdoor writer, book author, television personality, podcaster and after-dinner speaker Larry Weishuhn, aka “Mr. Whitetail”, has spent a lifetime outdoors. He has established quality deer management programs on well over 10,000,000 acres, written well over 3,000 feature articles and numerous books, has appeared in hundreds of television shows, has hunted deer and other big game throughout North America and the rest of the world. Larry co-hosts the weekly digital/tv show “A Sportsman’s Life” on CarbonTV.com, does a weekly podcast “DSC’s Campfires with Larry Weishuhn”, many blogs and articles each month and serves as an Ambassador for Dallas Safari Club, as well as being a partner in H3 Whitetail Solutions.

View all posts by Larry Weishuhn