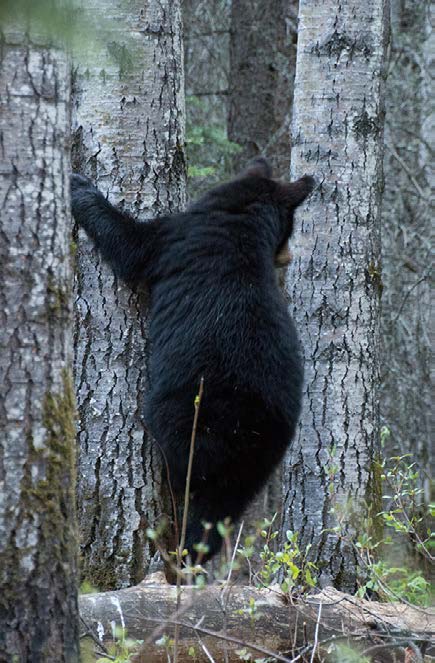 You Can’t Read Their Minds, But You Can Read The Signs

As it repeatedly slashed the ground and huffed, the black bear moved its head from side to side and wouldn’t back down.

“One more step closer and I will shoot,” I thought. Then the bear clawed the ground and faked a charge, bringing it even closer. With the animal now a mere eight meters away, I released. When my arrow pierced the bear’s lungs just behind the front shoulder, the boar quickly dashed away and dropped, ending an intense and scary situation.

I often think back and wonder if it was absolutely necessary to shoot that bear. But I have no regrets about the decision. And when I spoke to my family afterward, they were glad I was around to tell the story.

Through years of hunting over bait stations during the three-month spring black bear season, I’ve witnessed a variety of bear behaviors, from parental routines to battles for dominance, breeding rights, and food sources. I’ve also watched juvenile animals entering situations older bears avoid. As a result, I’ve learned to identify aggressive black bears and to respect every animal until I can gauge the situation accurately.

Here are some black bear behaviors unique to the spring season, and how hunters can capitalize on knowing them.

Early in spring, both male and female black bears of all sizes begin to wake up and roam the country in search of food to replenish calories after the long winter months. If you set up baits, then the closer you are to dens, the more likely you are to see bears right away. Hunting these sites in the early spring can sometimes be fruitful, but with the peak of the rut still weeks away, the best is yet to come. More often, early-season bear baiting is slow. A limited number of visitors can be seen for weeks as the bruins slowly emerge from their winter dens.

With bears not interested in much besides eating, their behavior is quite predictable during this time. It’s not uncommon to see multiple bears feeding together peacefully with little or no tension between them. I have witnessed up to half a dozen different bears feeding at the exact same spot in a single evening, without any conflicts, like a mill of canine puppies.

To attract black bears straight out of the den, you need a strong odor—the more horrific the smell, the better. It also helps to disperse the scent throughout the woods. Since beavers are a favorite bear snack, tether one behind your quad and drag it around to create a scent trail leading to the bait station.

To attract even more bears, I also dump restaurant grease at my bait site. It sticks to the bears’ paws and creates even more scent trails leading to my setup. If the weather reverts to cold, bears have been known to abandon bait sites and return to their dens to wait it out, making hunting unproductive until the cold snap passes.

As the season progresses, a good bait station can attract and hold a dozen bears. And as more bears dine at a bait site, the tension increases, occasionally leading to fights. Most disputes are settled by posturing, however, with fighting only as a last resort.

Watch a group of bears at a bait site and it’s evident there’s a social hierarchy, with a ranking of dominance for the right to breed sows or eat the best grub. Interestingly, size isn’t everything when it comes to gaining and holding a top breeding position. Attitude and posture count for a lot, as do vocalizations and odor signals. I’ve heard bears make a popping sound with their jaw as they approach a food source, even if other bears aren’t present. They also rub trees to disperse their unique scent, which can help reduce bear battles—at least in theory—by warning lesser bears of their presence.

The behavior of lesser bears is quite obvious once you’ve watched multiple bruins eat together throughout an evening. Younger and subordinate bears feed first, typically earlier in the evening when there’s still plenty of good light for hunters to shoot. Subordinate bears will eat cautiously and flee if they see, hear, or smell a more dominant bear approaching.

As the evening progresses, those higher in rank begin to appear, with the most dominant bruins usually showing up just before last light. Some dominant boars are only nocturnal feeders, however, which can be a source of frustration for many bear hunters.

Don’t be discouraged if a young bear shows up to dine early in the evening. Instead, think of it as an advantage. After all, a bear’s hearing and sense of smell far surpass a human’s, so it should know what’s happening before you do. If a young bear’s behavior changes, that can be a sign there are incoming boars, tipping you off to be at the ready.

Last spring, for example, I was hunting a large boar we had captured on a trail camera. Early in the evening, a young boar laid down right at the bait barrel and began to eat. An hour later, he suddenly stood up and sprinted out of sight. I hadn’t heard or seen a thing but, sure enough, 10 minutes later a large boar appeared on the scene. Interestingly, the lesser boar returned, but kept at a safe distance around his perimeter.

Mama bears can be quite aggressive toward other bears looking to eat at the same bait station, even fighting off larger bears that are trying to steal an easy meal from her cubs.

Sows with yearling cubs, on the other hand, will physically deter their young from following them into a bait site. They do this to permanently separate from their cubs so they can breed again that spring. I once saw what I thought was a pair of smaller boars playfully fighting, but, after closer observation, I realized it was a sow swatting at her cub—a cub she’d spent the previous 18 months raising. I could sense the cub’s confusion through its actions and cries. Such a scene may tug at the heart, but it also means the sow will be sought after by larger dominant boars as she comes into estrus.

Although not targeted by hunters in the spring, sows can also offer useful information. If you observe a sow rejecting her yearling cub, keep hunting over that bait throughout the rut, since she’ll be attractive to larger breeding boars. Conversely, bait stations controlled by sows with young cubs aren’t usually worth hunting during the rut. With a lack of breeding opportunities at the site, big boars have less incentive to visit.

Later in spring, as the bush transforms into a lush, green garden, the black bear rut kicks into high gear. In my region, that’s usually around the end of May. If you’re hunting a large boar during the rut, there’s no better bait than a half-dozen female beauties hanging out at one location. During the peak of the rut, such a location will showcase some of most intense and exciting bear behaviors. Indeed, the dynamic can change quickly when another dominant boar appears. You’ll often see bears fighting for the right to breed, challenging the established social rankings.

Big mature boars are smart, wary creatures that seldom drop their guard. But during the rut, they can be less cautious while seeking sows in estrus. And alpha boars will travel many kilometers in search of hot sows. Although hunting over a bait site that’s frequented by sows in estrus sounds like a slam dunk, it can be quite frustrating. Even though they can smell the sows, mature boars may also be well aware of your presence, leading them to continually circle the site out of range. This behavior can go on for hours, even days.

Once an alpha boar has bred a sow, he’ll move on in search of other sows at different bait sites, so encountering one of these trophies can require some luck with your timing. That’s why bait stations visited b y multiple breeding sows are best. If you miss one boar, there are still plenty of opportunities for the hunter as more bears come in.

If you’ve got a boar circling and watching a hot sow at your bait site, he will eventually commit and come to her. Such a trophy-caliber bear usually has just one thing on his mind—to get in and get out with her as quickly as possible. So, the moment he makes his move, you must be ready to take the first ethical shot presented.

Black bears are normally shy, retiring predators with little or no desire to interact with humans, unless forced. That said, these are powerful creatures that can cause serious injuries if provoked. Like other animals, bears have what I call a “threat space”—and if something encroaches into that space, the bear will either run away or respond aggressively. The size of the threat space is different for every bear and every situation.

Shy bears are easy to identify; they usually run away once they spot or sense you. In fact, most bears will retreat from a perceived threat, with younger bears or cubs also likely to climb a tree. With life experience comes knowledge, and large mature boars will also generally retreat from humans, but only because they’ve learned we can be dangerous. Younger boars are less predictable since they’re still gaining experience by testing different scenarios—and that can be nerve-racking.

Because spring bear hunting involves food, rutting animals, and humans all in the same vicinity, the usual rules for avoiding interaction with bears in the wild don’t really apply. When restocking a bait station, I enter quickly, making loud noises to avoid any surprise encounters. I also always have my bear spray or a short-barrelled rifle in hand for protection.

When entering bait sites, be sure to look up for treed cubs, too. I learned this lesson after watching a bear dash away from a bait station as we drove in on an ATV. Once we parked and started unloading the bait, we noticed the bear wandering back, apparently unafraid of us. Then we looked up and spotted two treed cubs—we were between them and the approaching sow. It was not a good situation, but with bear spray in hand, we stood tall and yelled, keeping the bear at a safe distance until we were able to leave.