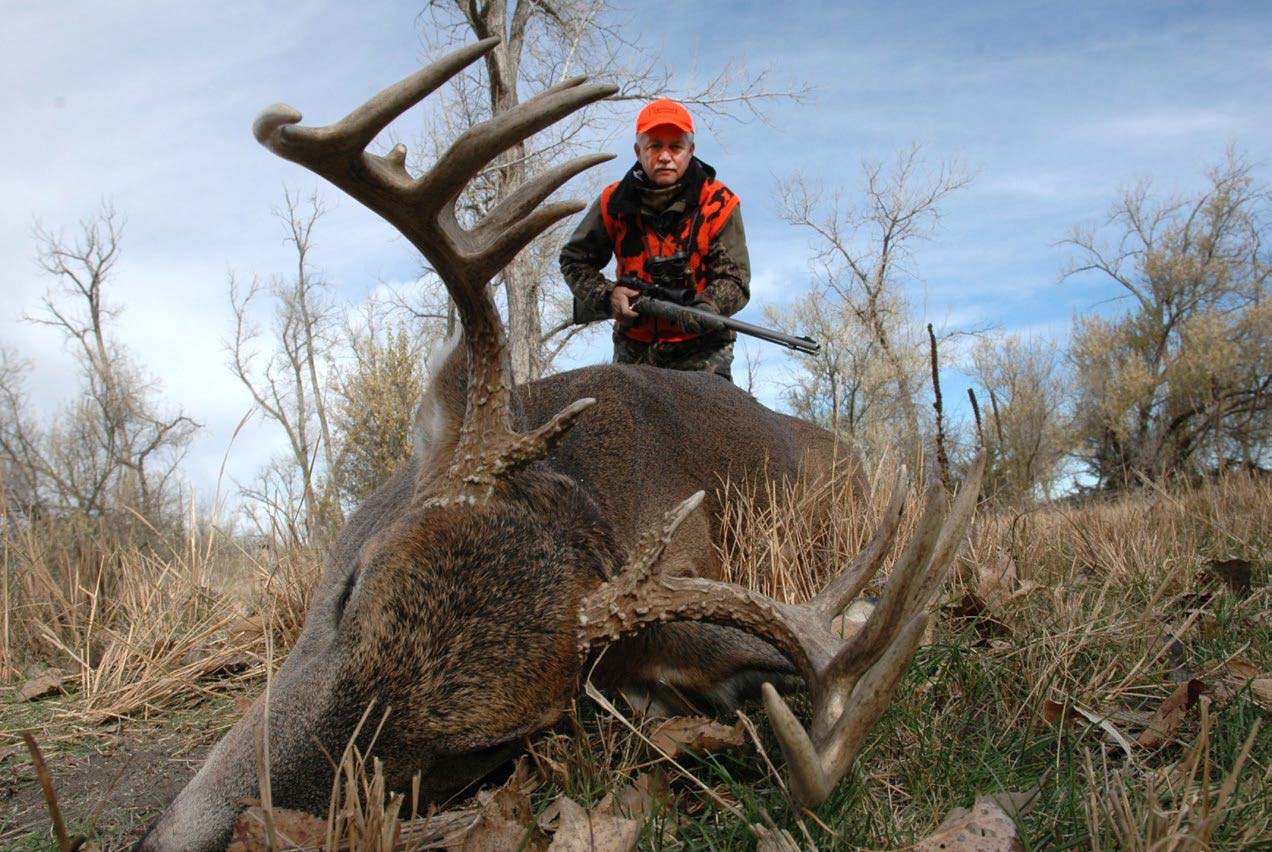 “Who in the hell is crazy enough to hunt in this weather,” scowled the state worker waiting for the storm to pass before plowing the roads. After ten minutes of talking football, the fellow cooled off, started his road grader, and pulled our rig back on the highway. The full-blown blizzard had also blown down a power pole and wires sparked across the highway, relegating us to hunting from camp. “I know a good spot,” I said to Seth McGinn, whose knowledge of the Nebraska Cornhuskers convinced the irate local to rescue us from the ditch.

Shouldering our muzzleloaders, we marched into the fray, circling the lee side of a woodlot where whitetails often sheltered from winter storms. Barely 100 yards from the cabin we began jumping deer and I urged my friend to hastily follow me through the knee-deep drifts to a high point overlooking the timber. We’d barely reached the overlook, when I saw a buck moving steadily below, watching its back trail. “Do you want the shot?” I whispered to my friend. When he didn’t reply, I seized the moment, rested my Traditions against a tree and squeezed off the shot.

In the howling wind, the smoke from the muzzle traveled about as fast as my bullet, yet I heard the slug hit and the buck went down. I could hardly believe our luck and we joked softly with our backs against the howling wind. Suddenly, another deer followed the same track- an even bigger buck. McGinn steadied his aim and boom! His deer stumbled and disappeared into the weeds and deep snow. This was crazy, 30 minutes from the cabin and two bucks down.

The key to late season success is focusing on changes in deer behavior. Whitetail deer become more concentrated in late season than at any other time of the year. In this last case, the heavy winter storm moved deer from their normal haunts into the sheltered wood lot. Normally, there are so few deer using that spot that hunters didn’t consider it. However, thanks to the terrible weather, the timber was loaded with deer and our upwind circle got us in front of bucks sneaking away. Food is another focus factor, especially agricultural crops. I know of a lodge in Illinois that leaves an acre of soybeans unharvested each year, counting on that natural food plot to draw deer. They set up tree stands along trails leading to the food source and selectively take one or two great bucks each winter.

Cornfields are also great food sources, especially if the field has been picked instead of chopped for silage. Food waste in fields keeps many deer and wild turkeys alive over the winter and they count on the high-protein grain to boost their survival. Winter wheat is also a prime draw as well as cultivated food plots with rape, turnips, and other plants that become sweet when hit by frost.

Once snow covers the northern Tier of the US and Canada, you may want to switch your hunting time until afternoon. Morning hunts can be successful, yet if snow has a crust, getting to a stand may scare every deer within hearing distance. Additionally, using a light, may educate the exact buck you are after. 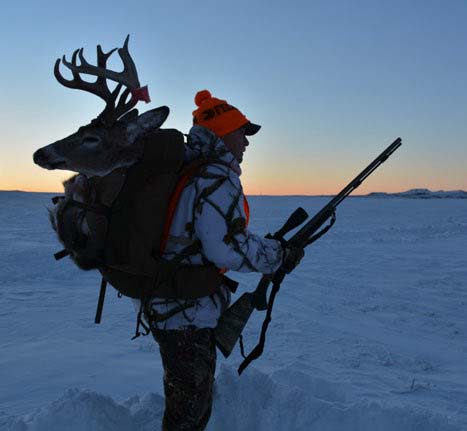 It may make more sense to head to a stand in early afternoon with a plan to hunt the last three hours of daylight. If your stand overlooks a route to a food source, you will have a good chance of seeing deer. The colder and more snow on the ground, the hungrier deer will be and the better your chances.

Additionally, by hunting a short period, you will stay warmer and sharper on stand. Toughing it out all day in windy freezing temperatures can be challenging and you want to hear or see deer as far in advance as possible. Without leaf cover, deer may quickly spot your silhouette if you move.

Without snow cover, you may want to hunt as you usually do, but realize that deer will often herd-up and will focus on food sources. This may call for re-scouting your usual hunting area searching for fresh sign and for bucks that may be looking for does that enter their second estrous cycle.

If you hunt in areas where whitetail deer are in good health with little winter mortality, many female fawns will breed. I live in the Eastern USA and in my state, DNR research estimates that 60 percent of healthy female fawns breed their first year of life.

Typically, these young deer will have their first estrous cycle in December, January, or February and bucks will go through the same rutting rituals as in November- making scrapes, rubbing trees, and responding to estrous doe bleats and buck grunt challenges.

Small deer drives in late season are both fun and effective. Push areas of thick cover and you’ll find whitetails.

Rattling antler tricks can work well, especially on cold crisp days when their sound travels long distances. My first whitetail hunt in Canada was a weekend affair. The outfitter said I was crazy to hunt just two days, but that was all the time off work I could muster. My first day in early November saw exactly zero deer.

About noon on that first day I climbed down from my tree stand to talk to a passing hunter, more out of boredom than social need. “Do you have rattling horns” he asked politely. “They really work well this time of year.”

The next day, I asked my outfitter to drop me off at the highway so that I could walk the half-mile to my stand and rattle along the way. In less than an hour, I was standing over the biggest buck of my life. After rattling a few times, I saw what I thought was a coyote loping toward me. A quick look in the scope proved otherwise.

Snow cover makes scouting for late season deer easier. As they herd up, it’s not uncommon to spot deer tracks with binoculars negating the need to physically get into the woods where your scent and or presence can upset normal deer movements.

Bucks make significantly larger tracks than does, however, if you find a concentration of does, you can bet there are bucks bedded nearby. They may be nocturnal, yet there’s a way to kick them out of bed and into your sights.

Two seasons ago, I hunted a river bottom that had picked corn, alfalfa, and lots of pines and thickets along its border. This spot is so special, locals call it “The Promise Land” because it always holds deer.

There were four members of our group and I was lucky enough to be a stander at the end of a pine choked corridor. Dressed in full winter Realtree camo, I tucked under a snowy cedar and waited. Twenty minutes into the drive, five does suddenly appeared in front of me and walked with 10 feet without noticing me. The snow camo was so effective, I felt invisible.

As the last doe passed my location, I was mesmerized by the doe proximity until I mentally slapped my consciousness. “Snap out of it… a buck could be following.” In seconds, I saw movement as a heavy horned buck followed the same trail. As it stepped from the pines at 20 yards, smoke filled the air and the buck crashed 30 yards away.

Get in the Game

If you’ve never tired muzzleloading, be advised it can be addictive. Every load is a hand load and “one good shot,” is the heart of the sport, plus you’ll get extra weeks of hunting time at some of the most enjoyable time to be in the deer woods.

Muzzle-loaders.com is a one-stop website for all things muzzleloading. Use it as an overview before doing further research or the end game and place an order. Here’s a quick look at great gear I’ve used personally:

Today’s blackpowder rifles are so well crafted that I’d recommend “all of the above” and have confidence hunting with each of them. However, when it comes to muzzleloading bullets, I have a distinct bias about copper over lead. Most of the above rifle brands sell bullets, some with plastic sabots and other with a plastic base, the PowerBelt brand the most popular.

My preference of copper bullets, like the Barns Expander, is based on experience and science. Most muzzleloading rifles do not generate hydrostatic shock in animals like high-powered rifle bullets. Therefore, a muzzleloading bullet kills by tissue damage. Lead bullets begin to expand upon entrance of an animal and rarely exit the far side except for a complete double-lung shot. Copper bullets, by contrast, open their petals and cut their way through tissue, almost always resulting in an exit wound and a much greater blood trail. As a result, animals are much easier to trail and recover.

Some states, like Colorado, forbid bullets with sabots, forcing many deer and elk hunters to use primitive lead bullets. I avoided this issue last year by using Thor bullets which are 100 percent copper. This unique brand sells you a “sizing pack” so that you can test the bullet diameter from .500 to .503 in your rifle. Once you determine which bullet size shoots most accurately, you can buy that specific size. Muzzleloading hunters can choose from 100’s of bullet combinations, like center-fire riflemen. You’ll also need to choose powder and an ignition primer. Pelletized powder makes loading a rifle easier than lose powder, however the later may be more precise and allows for unique load sizes such as 110 grains, whereas pelletized powder comes in units of 30 or 50.

Shooting muzzleloading rifles is fun and here’s the chance to find which bullet and powder combination your rifle likes best. All rifles shoot differently and a small variation in powder/bullet combination can make your front-loader a tack driver.

A final thought about powder charges. More isn’t always better. The greater your charge, the more fouling and recoil you will experience. In most cases, 100-120 grains of powder provide ample velocity and energy for whitetail deer.

Finally, Keep your rifle clean. Be sure the fire channel is clear and protect the ignition system from rain and snow. In-line rifles may look like modern center-fire arms, yet moisture in the breech is trouble, resulting in ignition failure. For confidence, start with a clean rifle each day.

The season’s not over until it’s over. Stop planning for next fall and get into the woods. The season for many areas doesn’t close until January, allowing plenty of time to be in a stand, stalk quietly, or make small stealth drives with friends. The rat race of the rut has calmed down for hunter and whitetail. A semblance of peace and predictability has returned to the forest… what better time to be there?

I’ve used all five of these brands over the past 40 years and each has its unique features. Here’s a quick look at one model from each manufacturer.