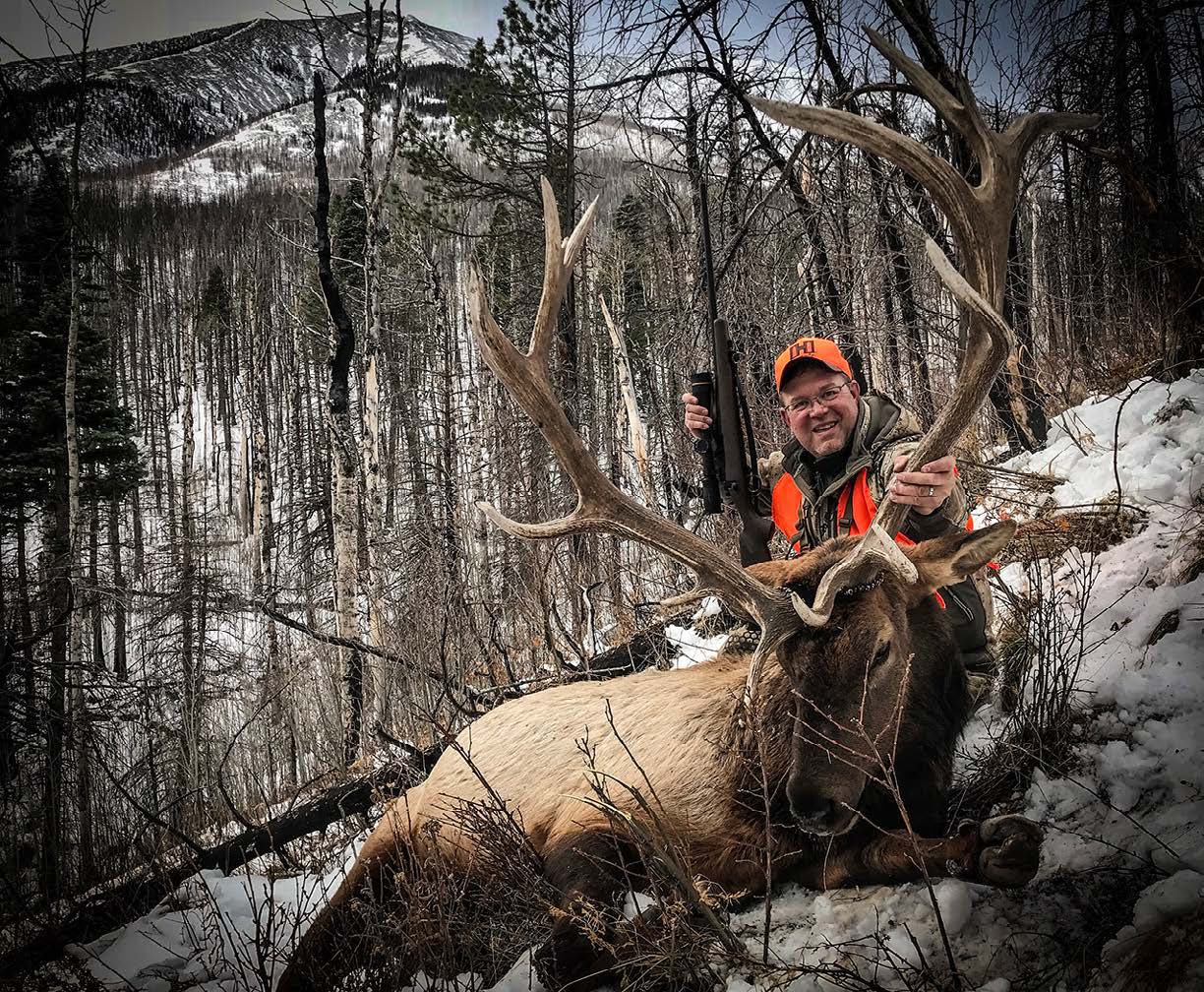 A quick stop at a local sporting goods store put my license and tag in my pocket for a third-rifle season elk hunting in Colorado. We then headed for Fred Eichler’s ranch and lodge, where he operates Fulldraw Outfitters with his wife, Michele, and the rest of his family. Fred is one of those guys brimming with excitement and energy, so often creating contagious excitement for a pending hunt. Fred gathered us around the table to go over the camp rules. What stuck in my mind was his advice to harvest a four-point bull if given the opportunity. The four-point requirement helps ensure mature bulls for breeding, and Eichler warned that passing up a legal elk might mean going home empty-handed.

Fred knew I didn’t mind working for an elk so he put me in a remote tent camp where we would be hunting Colorado public land. The tent camp was set up across a small gully, and we would hunt on foot from this base. Getting to camp was an adventure, and the number of critters we saw on the way continued to generate excitement. We wove our way down trails and washed-out roads before reaching our destination.

The image of tents and horses backdropped with snowy mountain peaks created intense anticipation for morning events. We unpacked gear and enjoyed a quick dinner before turning in. The crisp mountain air meant not lingering before zipping the sleeping bag to my chin.

Before long, the smell of fresh coffee on the camp stove wafted through the air, and the warm cup was a welcome hand warmer. Carlos Holguin was my guide, and I knew we would get along well. Carlos was as excited as I was. He told me about a series of meadows he wanted to reach by first light. The hike was a steady uphill march, but a good trail allowed quick progress. Elk tracks in the snow let us know that we could encounter elk at any corner.

Carlos had guided several hunters in the area, but was yet to see a bull hit the ground. It was the first morning of the third-rifle season, and nobody else had been up the trail. There were lots of tracks, but the elk had already moved off. We edged up a rise to glass a long meadow. The sun was starting to brighten the eastern sky, and we edged along the meadow to where it met a stand of burned timber. The blackened tree trunks seemed to eat up the view, and we glassed the surrounding ridges with the hopes of finding elk.

We edged into the timber to see the bottom of a steep valley and the ridges on both sides. A downed tree provided the perfect perch, and we sat down to start glassing. We found tracks in the snow but the elk were evasive. The sun peaked over distant mountains, and it felt like the temperature dropped a few degrees. We had been sitting for about 15 minutes when I spotted an elk with my naked eyes. The bull was bedded about 150 yards from us and was barely visible.

The cold disappeared with my increased heart rate. I pointed the bull out to Carlos, and we confirmed that it was a nice six-point bull with tall, even antlers. The bull was bedded at an angle, and we decided to stay ready and wait for the bull to stand and offer a shot. We had the whole day ahead of us, so being patient would be our most significant advantage. The bull lay comfortably, chewing his cud and oblivious to our presence. If we hadn’t stopped to sit on the log, we might have spooked the bull and never seen it again. However, strategy and luck are always good assets when it comes to hunting.

The bull gave us plenty of time to look it over, and that allowed us to find a solid rest and shooting position. The old burn would swallow up the elk in seconds after a shot, so making the first one count was imperative.

The sun was now up, and we had been waiting about 20 minutes when I caught a glimpse of more antlers. A second bull was bedded slightly below the big six-point. I could see the beam of the second bull moving in the sunlight. My heart again went into overdrive because those beams seemed extremely heavy. We couldn’t make out an entire antler, and while we were trying to decipher what we were looking at, the second bull stood up.

My eyes almost popped out of their sockets with the first complete look at the bull. It was massive! The antlers stretched past the bull’s hindquarters. I immediately identified the bull as my new target. Carlos did not say much, and I kept my rifle firmly planted on my shoulder, waiting for this bull to offer a shot. The terrain was extremely steep, and the bull took a couple of steps uphill, exposing its vitals. The other bull stayed bedded, and when the heavy-beamed monster turned broadside, I tightened up on the trigger. A resounding whack followed the rifle’s report, and the bull took off on a dead run downhill, quartering towards us. I worked the bolt, found the bull running through the burnt pines, and touched off a second round. The bullet found its mark and the bull collapsed mid-stride and skidded downhill through the trees. Everything fell silent.

I chambered another round and sat watching. Elk are notorious for being tough and finding new life, and this was a bull I wanted to get my hands on. We waited a minute before starting down the hill toward the last place we had seen the bull. The terrain was much steeper than it looked, and it was not easy to stay on my feet with the fresh snow.

Everything looked different down the slope, and we searched for the elk. I started to climb up to find the tracks when Carlos whistled and pointed down the slope to a massive bull. I couldn’t get there quick enough and made my way over to the biggest bull I have ever killed. It was much bigger than anticipated and had some funky stuff going on with its right antler.

The bull had broken its pedicel, and the bone had healed, but the antler was now growing from the animal’s forehead rather than the top edge of the skull. The deformity made the antler spread less than if it was still growing normally, but I did not care. The injury had stunted the growth of the points lower on the beam, but the mass the bull carried was mind-boggling. The top of the antlers was webbed and so heavy I couldn’t get my hands around them.

The bull perched precariously on a steep downhill angle, with two inches of antler sunk deep into a tree trunk. The small portion of antler was holding the bull in place, preventing it from sliding to the bottom of the draw.

Carlos and I field-dressed the bull and headed back to camp to get the horses. We had the entire day ahead and would return to quarter the elk and trail it out with horses. The walk back to camp seemed euphoric, and I had to keep asking Carlos if the elk was real.

The rest of our crew met us, and we returned with enough horsepower to get the bull back to camp. It started to snow, but the cold moisture did not dampen our enthusiasm. The backstraps were removed carefully, and I took a moment to give thanks for the incredible adventure and unique trophy.

We were back to camp early in the afternoon, and I couldn’t help but sit and stare at my grand, old bull. The stories he could tell, the travels he had made, and the fights he had won and lost would be legendary.

I couldn’t help remembering Fred’s words about taking a four-point bull. I was prepared to harvest any bull but was blessed with one that would be tough to beat. Sharing the experience was Carlos was exciting, and I hope to see him on the trail again sometime soon.

Elk are tough critters, and taking the right gear is essential to success. Swirling mountain winds can give a hunter away. Wildlife Research Center Scent Killer Gold provides an advantage and the confidence to be successful. From laundry products to sprays and wipes for the field, I wouldn’t consider hunting elk without hiding human odor. Testing at Rutgers University has proven the Scent Killer Gold products are 99% effective at stopping replicated human odor 20 days after drying.

I prefer a .30 caliber bullet for elk. The Remington.300 Win Mag HTP Copper, Barnes TSX BT provided the terminal performance to ensure my trophy elk would sport my tag. The bullet is ideal for big-bodied, heavily boned animals like a mature bull elk.

At the time, Remington was still doing some custom shop work, and a dressed-up Model 700 was a tack driver. The fit and feel allowed for accurate shooting on stationary and moving targets.

An ALPS Hybrid X Extreme pack has been a long-time favorite for packing everything required on a hunt. The built-in meat shelf was perfect for getting the huge backstraps back to camp. The Extreme bino harness with a rangefinder pouch kept my optics secure and dry through snow and rain events.

The Leupold VX-6HD 3-18×44 riflescope was exceptionally clear and easy to stay on target. The repeatable accuracy was like insurance in the rugged, unforgiving landscape. A Leupold BX4 Pro Guide HD binocular helped find elk. The RX 2800 rangefinder provided the range and ballistic information with steep inclines.