Getting The Jump On Mule Deer 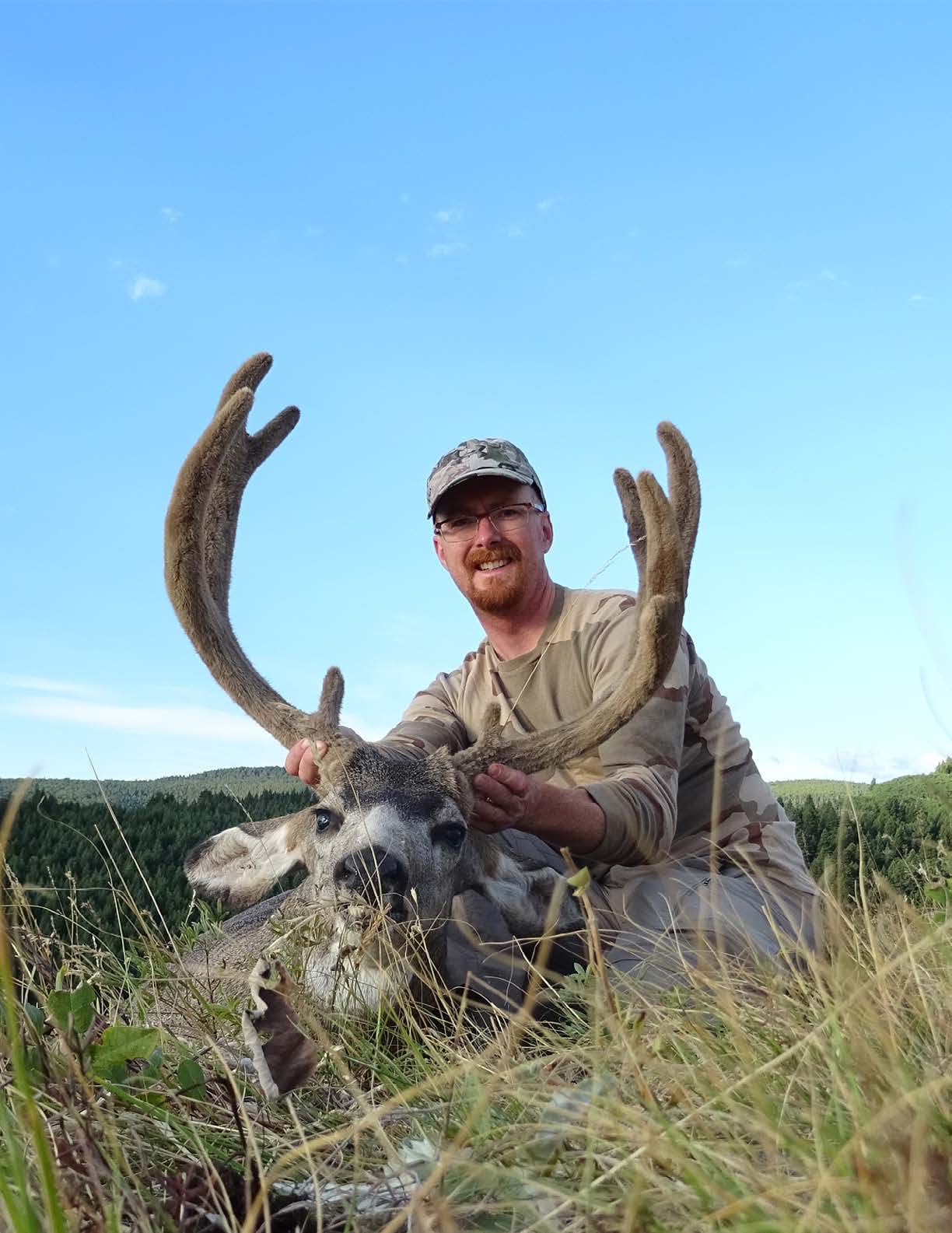 Thirty degrees. Dusty and windy. Bachelor herds of big mule deer bucks. Those are the ideal conditions you want to hunt early season for mule deer.

Who hasn’t dreamed of taking a velvety mule deer buck with their bow? The first few days of the season offer the best opportunity to harvest a mature buck because they are still in summer mode, venturing into crop fields on a regular basis. Like all hunts, that’s no guarantee though, and you must do your scouting, pattern recognition, practicing and mental preparation to swing the odds in your favor.

There is no doubt that scouting through the summer months will increase your odds of harvesting a mule deer buck. During the summer, bucks can be seen in large groups of bachelor herds, foraging calmly together in their favorite food source field. They can appear like clockwork on a daily or weekly basis. The most important thing for you to do is this: put on the miles. Observe them from a distance for the quality and quantity of bucks feeding in each field where you have permission to hunt. You may

also find bucks in fields that you do not have permission to hunt on, so now is a good time to ask for permission to use those fields to expand your hunting territory. Public land can also be a great spot to find bucks, but this is usually done in higher country or grazing lease areas.

Judging mule deer from a distance through a spotting scope can be tricky. They all look massive when you’re looking from behind them. What you really want is a side profile and a broadside view of their antlers. This will give you a good indication of how deep the forks are and how tall each tine is. The ear makes a great reference point to estimate and gauge the length of the times and the deepness of the forks.

The length of a mule deer ear on a mature buck is around eight inches from the base of the skull to the ear tip. The velvet can also add what looks like a lot of mass but be careful about that. Head-on views of a buck will give you a great indication of the spread or width of the antlers, but this contributes the least to the score of the buck. The distance from tip to tip of erect mule deer ears roughly measures 24 inches. Antlers that extend past the ears on both sides will be at least that wide.

You’ll also want to scout the number of bucks in the area and where and when they enter the feed- ing zones. Some deer can be quite random about this, but usually have a few favorite fields to forage during the summer months. It’s import- ant to note these preferred food sources, but also to be aware that these spots can change once tem- peratures decrease and the crop matures. Taking notes from year to year on when crops are harvested and whether they are mature or sprayed can give you excellent intel- ligence. That can help you forecast where bucks will move next if their favorite field has changed.

You also want to practice with your broadheads on. Broadheads can plane quite a bit, contrary to field points, and that planing can be amplified with the slightest breeze. It’s also wise to practice shooting from a crouched or kneeling position. Often, when stalking, you’re coming in as low as possible to maintain your profile out of sight, then at the opportune time, you’ll need to stand up to get a clear shot.

Practice during the hot summer days, too, since it’s going to be hot in early September when the mule deer are out in the open. It’s not like you can wear shorts and sandals to crawl through a crop field, which would give you cuts and scrapes everywhere. So, you’ll need some gear that covers your skin and protects your skin from sun and scratches but doesn’t make you too hot. You might be waiting on a deer rise from his bed for a few hours—if not half a day—and there is no shade in the middle of open country.

Ambushing mule deer can also be an effective tactic, especially from a tree stand or a blind. Preferred travel routes in and out of fields are ideal spots to set up an ambushing spot. The issue I find is that mule deer really like to bed anywhere—whether that’s out in the open, slightly covered, or in a nasty thicket. Setting up a blind or tree stand is not difficult but getting in and out of position when the deer are using that particular area can be challenging. Often, you get into position for a hunt and things do not go exactly as planned.

In that situation, you’re pinned down in your ambush spot and may spook deer when retreating as the sun sets. This doesn’t help your chances for future hunt days because you’re now educating smart mature bucks to venture elsewhere and away from this unknown danger. If you are going to use this strategy, having several spots to hunt, and rotating the pressure from spot to spot, is the smart way to go.

Hunting mule deer in the early season can be a rewarding experience. The best time to do so is during the first few days of the season when the bucks are most vulnerable and are still using their summer patterns. That’s when they are still unaware of new predators that are allowed to now hunt after opening day.

Unfortunately, not all hunters tag out during the first few days. After those initial days, the hunting gets harder and harder. Mule deer grow wise to the pressure and crops start to change as they are harvested. What you thought was a slam dunk during your scouting period could change rapidly into being an ideal mule deer habitat with no mule deer in sight.

So, it’s important to have a few backup plans in place. You need somewhere to hunt during those first few days. If your original plan doesn’t pan out, you still need to stay focused, but that can be a tough task. An abundance of mule deer during summer scouting trips can quickly change to there being a great habitat but no deer in sight. The truth is, they haven’t vanished, they’re just hidden from plain view.

I once was trying to ambush mule deer for a solid three weeks during the opening month of the season. I passed on numerous smaller bucks hoping for a larger mature buck that I had on camera and had seen during the summer months. It was exhausting sitting there, hoping and waiting for one of my target bucks to appear. Smaller bucks made their way into the field, though, and each night I hoped that a large one would be trailing behind, but that was never the case. To make matters worse, the crops were harvested off the fields and the deer stopped going there, so now I really had no idea where they were. As I mentioned before, the best time to kill a buck is the first three days of the season because after that, it seems to get exponentially more difficult.

The actual stalking of a mule deer is an adrenaline-filled experience. Once you have a buck located and a good steady strong wind that will get you into a position downwind of him without being seen, you are all set. Now all you have to do is execute the plan and stalk into range. Ideally, you would have spotted this buck through binoculars or a spotting scope from a distance, and he should have no idea that you are there.

If you watch him bed down, that should give you plenty of time to make your stalk. Going slow while maintaining a downwind position is necessary to give yourself a chance. Once you are within shooting range, it becomes a waiting game for the buck to stand up so you can take a clean, ethical shot. Sometimes they will get up and stretch, but they don’t offer a good shot and bed back down. At that point, you might as well lay back down yourself and have a little rest since the buck probably won’t get up for a while. Don’t be surprised if you are extremely hot while doing this. Your metabolic rate will increase substantially with the adrenaline rush that comes with stalking a live wild animal. Coupled with a hot, sunny day, make sure you have some water with you or at least have some back at the truck or camp when the stalk is complete.

Hunting the early season for mule deer is fantastic. The weather is nice, you are excited to be out in the mornings when it is cool and crisp and you revive from your summer off. If you work hard at scouting figuring out where, when and how many deer are using fields for feeding you will be well prepared for opening day. If you happen to tag out on opening day, that is fantastic however if you don’t, stay focused and keep trying until you find the deer and keep a journal of where they show up next for future years.