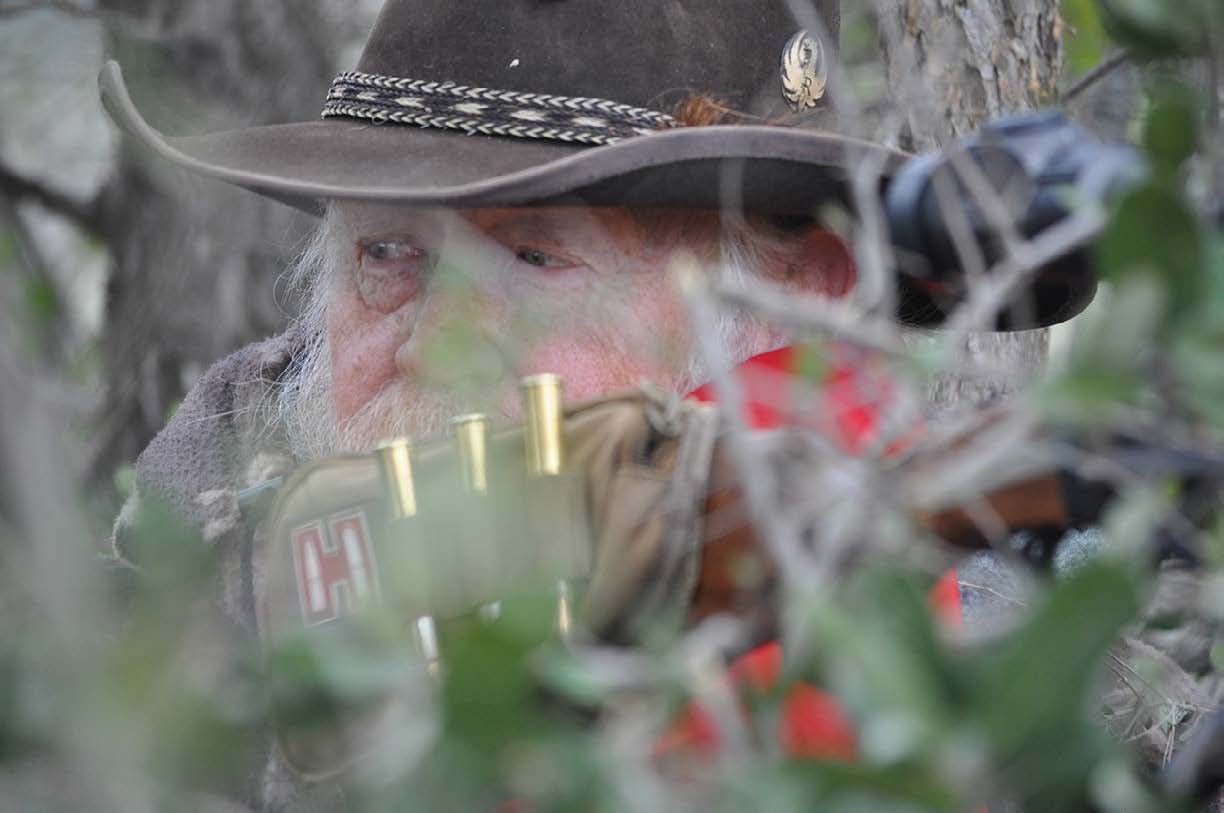 and Seeing Targets from Their Level

These were the directions from my Alabama host: “Position your feet so you can raise the lower platform of the crawler, raise the platform, then stand on it. Next, use the upper part of the platform where the seat is to pull yourself up the tree. Then, repeat the process until you get 20 or more feet off the ground. Nothing to it!”

Before I could ask questions, he was gone.

That was the very first time I had ever been exposed to a “climber.” There was no safety harness back then, but I started “climbing” my way up the tall, straight pine tree. I looked down several times, wondering why I was doing this “stupid thing.” I climbed up the tree to 22 feet off the ground. Looking down, it felt more like 50. I hugged the tree tightly and wondered how in the world I would be able to take a shot, holding onto the tree as I was. To make things worse, the tree swayed back and forth with the wind. 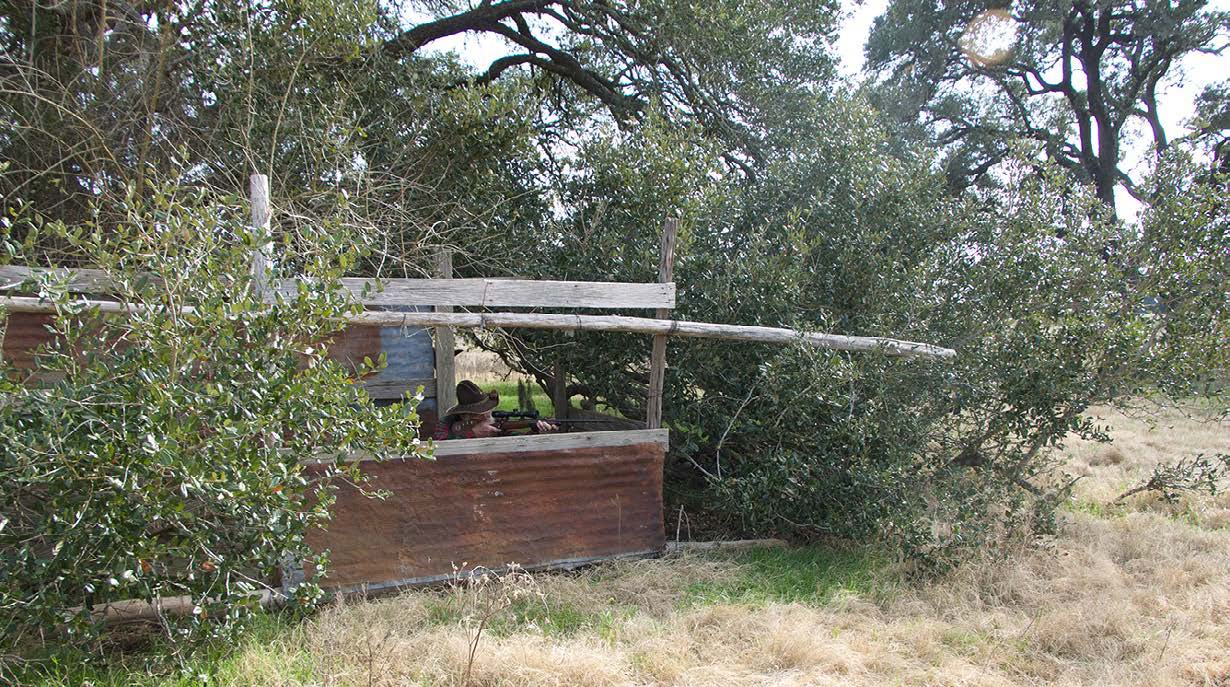 Thankfully, I did not see as much as a squirrel that afternoon. Maybe that was because a good part of the time I was up in that tree, my eyes were only two inches from the trunk! As it started getting dark, I came to the realization that I needed to “figure out” how to get down without falling! By maneuvering up one more foot, I determined how to coordinate my feet and hands in order to start my way down. It took 10 minutes more before I got far enough down the tree to a place where I felt comfortable about jumping to the ground. Once I had both feet on the ground, I promised myself I would never again use a climber. It would take a herd of grizzly bears, all with serious toothaches, to chase me up a tree again with such a contraption!

I made that promise 40 years ago, and I haven’t broken it since! What I have done is sit in permanent tree stands while hunting black bears and Whitetails, but those stands were solidly attached to trees with stout ladders! 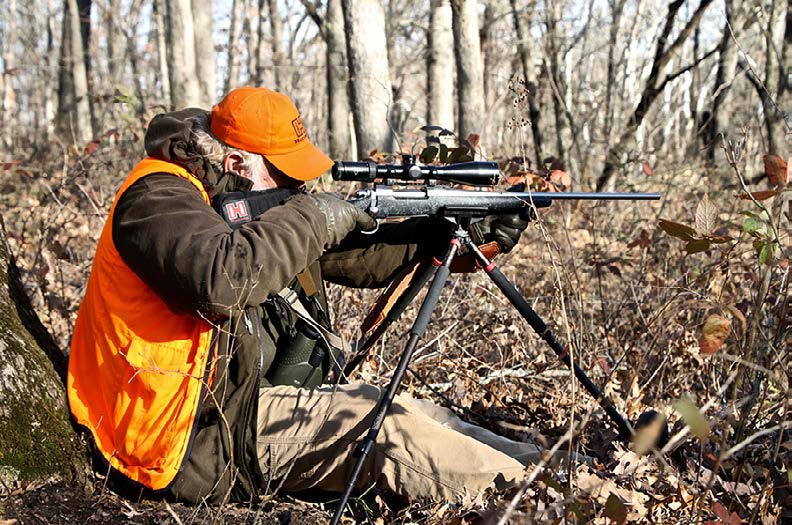 I dearly love hunting on and from the ground. I did so long before my ascent to the heights I just described. While I have no fear of heights, there is simply something truly special about hunting at eye-level with deer and other species.

During my early days of hunting Whitetails, starting when I was four years old, my dad and I built ground blinds from logs dragged together. More often, we simply found a comfortable place to sit with our backs against a big oak, cedar, or other tree. After scraping away grass, leaves, and dead limbs so we would be comfortable (but also not make any noise when moving) we would cut some evergreens—cedar and yaupon limbs—then either stick them in the ground or pile them up to create front cover. Quite often, we set up at least two such “ground stands,” one on each side of the area we wanted to watch. The wind at the time of the hunt was how we decided which one to sit in. By sitting on the ground pushing up dirt, we created a surrounding smell of freshly turned soil that worked as a cover scent, too.

A few years ago, it seemed that someone was not considered a “real deer hunter” unless they hunted from somewhere near the top of a tree. The idea here was that deer couldn’t get your scent or see you since it’s believed that deer never look up for danger. I never bought into that theory.

I remember a time hunting property in southern Georgia. I was the only firearm hunter, using a handgun. Everyone in the hunting club hunted with a bow and arrows. All used “crawlers” and sat in their tree stands near the top of the tall pines. 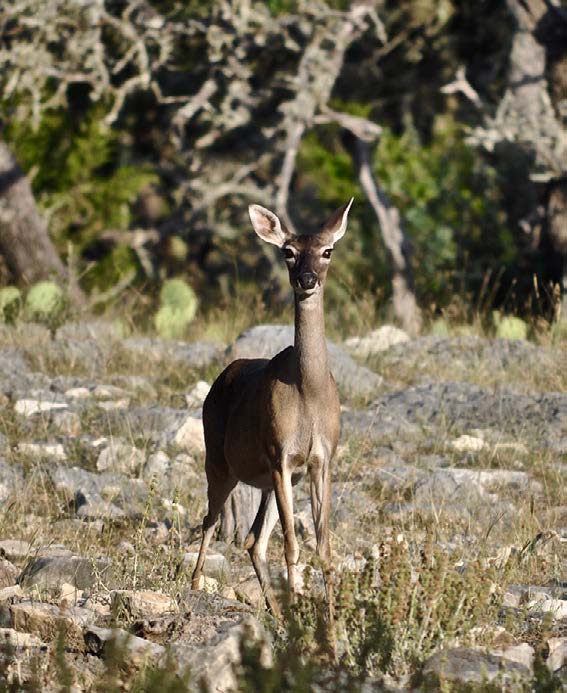 Interestingly, after several years of them all hunting from trees, mature bucks learned to expect danger from above. These bucks avoided tall trees and walked around looking into treetops. Older bucks mostly looked up and paid little attention to anything on the ground. I loved it! After I shot two really nice bucks on the property while sitting on the ground against a big oak with only a bit of cover in front of me, I was never again invited to hunt the property.

Years later, I learned that several of the property’s archers started hunting from ground blinds much as I had done. Those hunters then took some of the best bucks ever taken on the property. This was before the advent of camouflaged canvas-made “pop-up” ground blinds. Once those became available, hunters switched to hunting out of Double Bull ground blinds. At the time, Double Bull Blinds were the best and finest available. Today Double Bull is owned by Primos.

I like hunting from natural ground blinds, except in extreme weather, like rain, snow or extreme cold, although I have often done so. I often sit in the relative open with my back against a big tree trunk as a backdrop. Hunting in relatively open areas and on the ground,

I have re-learned what I discovered early in my hunting career. Deer pick up on movement, particularly if it’s quick and jerky. Camouflage clothing (when I wear it, it is Kryptek) works. Otherwise, wearing red and black or green and black plaid, or sometimes solid “natural” colors like green and brown, works well in broken shade when hunting on the ground. The broken shade creates its own camouflage patterns. Many times, while sitting on the ground—including when wearing my usual brown western hat, leather gloves of green or brown, and with my face and white beard covered with a red bandana—I have had deer (even wary mature bucks) come up close. They never knew I was there. 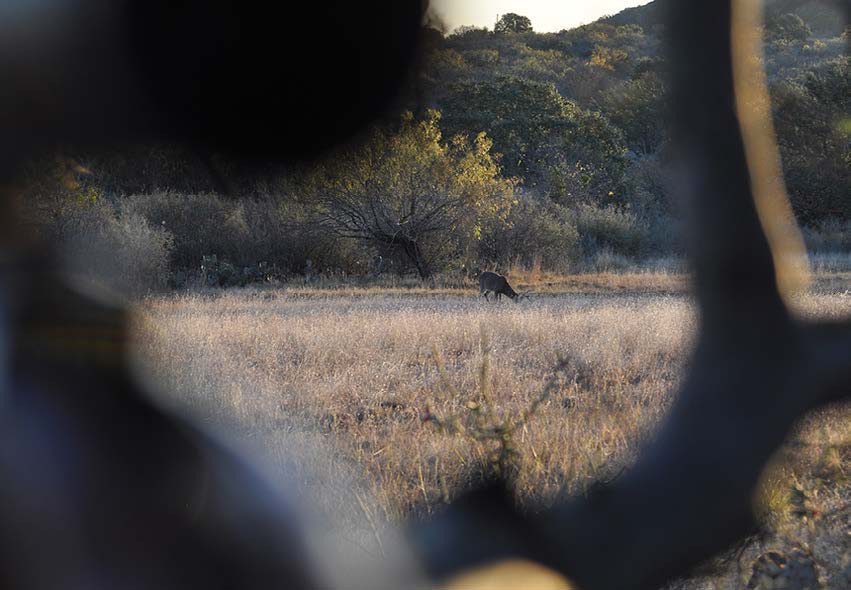 Deer pay attention to what they see and what they hear, but they literally live and die by their nose and sense of smell. To counteract human and other odors associated with humans, I spray my clothes, brown hat, leather gloves, boots, bandana, and belt. I also spray my guns, optics, slings, binos and bino strap, camera gear, and cameraman (if I have one with me). I use TRHP Outdoor’s Scent Guardian. Over the past 50 years as a hunter, guide, deer biologist, and researcher, I have tried virtually every product on the market, as well as many “home concoctions” that supposedly covered or eliminated human odors. There is only one product that not only does what it claims but goes way beyond: TRHP Outdoors’ Scent Guardian. That’s why I allowed my photo and signature to appear on the product and bought into the company that created and produces it. If hunting from a pop-up ground blind, I spray that with Scent Guardian as well. 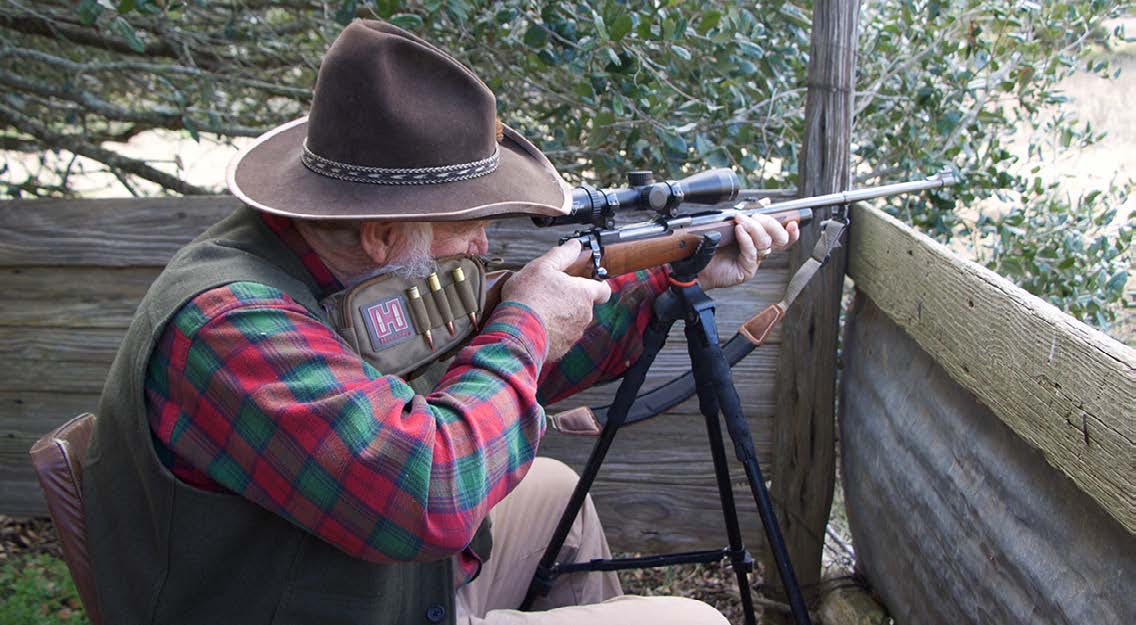 In recent years, many companies have started producing a variety of pop-up ground blinds, complete with metal structures for support. These are available in various sizes and configurations. I have hunted from numerous types of commercially available blinds. Some are designed for one person, others for two or more. Some are primarily for bowhunters, complete with screening material that can be shot through with an arrow without affecting accuracy.

I prefer those that have room for two or more hunt- ers—a hunter and a guide, or a hunter and a cameraman. Additionally, I prefer ground blinds that, at my 6’3” height, are tall enough to let me com- fortably stand without having to bend at the waist or dip my neck. If I can stand up, there is a much better chance that I will hunt all day. I have taken sever- al of my biggest antlered ma- ture bucks between the hours of 10:00 am and 3:00 pm.

Ground blinds can quickly be set up and, if necessary, easily moved without a lot of effort. Years ago, before such stands became available, I was in the Midwest hunting a particular buck with a Thompson/Center .50 caliber muzzleloader. It was loaded with Hornady’s 250-grain SST in front of 150 grains of Hodgdon’s Pyrodex pellets. No scopes were allowed on muzzleloaders at the time in that particular state. My target buck was an extremely long tined, though narrow 10-point. He fed in a hayfield each evening among large round bales.

The outfitter and I built a round hay bale ground blind. It was a steel frame covered with mesh wire. We wove dried grass into the mesh until the blind looked exactly like all the other hay bales in the field. I cut small holes on all sides, just big enough for my muzzleloader and sights. The first evening I sat in the blind, I shot my targeted buck at 50 yards. He narrowly missed making the all-time Boone & Crockett record book as a typical. I was thrilled with his size, but also in how we had taken him! 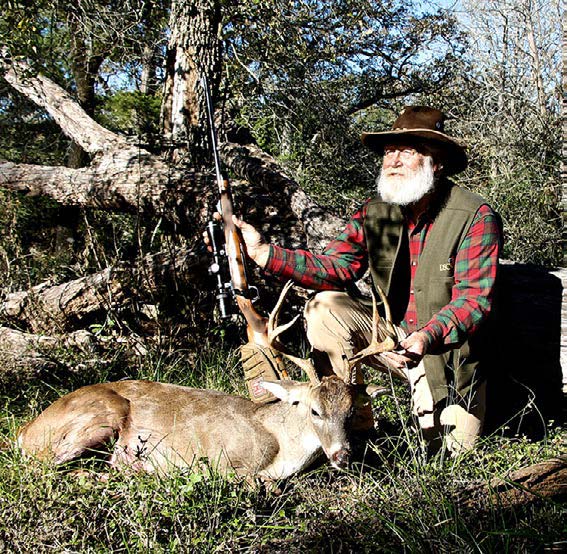 When it comes to buying a ground blind, large stores such as Scheel’s, Bass Pro, Cabela’s, Academy, and numerous others are great places to check them out. I like going to those stores because, as fall approaches, they have several different ground blinds you can actually crawl into to see if they suit you and your needs.

The cost of a commercial ground blind runs from less than $75 to well over $500, depending upon size and shape. Some of the better ground/pop-up blinds are produced by Ameristep, Rhino, Primos, but also a host of others. In addition to buying a blind at the stores already mentioned, Sportsmansguide.com, the internet sales company, has a huge selection of excellent ground blinds. The hay bale blind that the outfitter and I built was created to blend in with what local deer were accustomed to being near and seeing. With that example, when you set up a ground blind using logs and limbs from the area or a commercially accessed canvas camouflage ground blind, it’s a good idea to add natural materials. By placing brush, weeds, limbs, and other locally sourced materials around it, the structure indeed appears to have been there for a long time and it blends in with the local vegetation. When using such blinds, I usually set them up at least several days or a week in advance of hunting day to get them “brushed in.” However, I have also had good success when setting them up and then immediately start hunting from them the same day.

If you are a dyed-in-the-wool tree climber or treestand hunter, and you’re successful at hunting, good for you! If you’re looking for a new challenge, and one that adds a new dimension and excitement to hunting (particularly for deer or black bear), please consider hunting from a natural or commercially available ground blind. I have a strong feeling that once you become a “grounded” hunter, you may abandon crawling into trees!

Professional wildlife biologist, outdoor writer, book author, television personality, podcaster and after-dinner speaker Larry Weishuhn, aka “Mr. Whitetail”, has spent a lifetime outdoors. He has established quality deer management programs on well over 10,000,000 acres, written well over 3,000 feature articles and numerous books, has appeared in hundreds of television shows, has hunted deer and other big game throughout North America and the rest of the world. Larry co-hosts the weekly digital/tv show “A Sportsman’s Life” on CarbonTV.com, does a weekly podcast “DSC’s Campfires with Larry Weishuhn”, many blogs and articles each month and serves as an Ambassador for Dallas Safari Club, as well as being a partner in H3 Whitetail Solutions.

View all posts by Larry Weishuhn