How To Bow-Kill A Whitetail During Opening Week 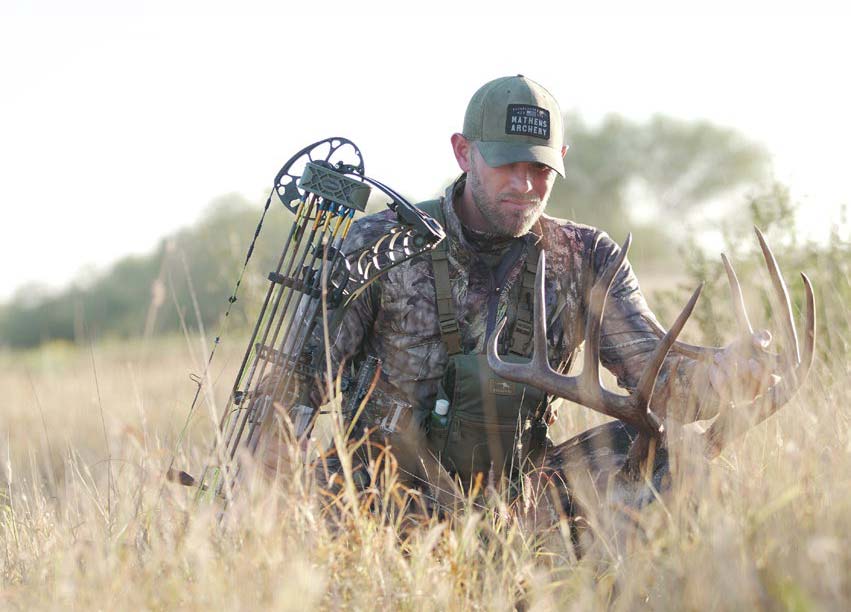 Sweating profusely, I headed for the treestand that my brother and I had hung a day prior. The setting was a timbered creek bottom with bedding to my north and a standing cornfield to my south. I climbed into my hang-on stand 50 yards north of the cornfield and endured the swelter-ing 85 °F heat. If not for my ThermaCELL, mosquitoes would’ve carried me away. Still, my optimism soared.

Not long after, a fawn ambled by 30 yards away. I felt that the early movement was a sign that opening night would roll out a deer parade. But, shadows lengthened as the orange ball hugged the western horizon, and not another deer had shown. Eventually, the end of shooting light loomed just 10 minutes in the future when footfalls in the creek were unmistakeable, even with the deafening cicadas buzzing all around me.

I immediately went into autopilot, standing up, grabbing my bow and looking for the source of the sloshing creek water. In about 15 seconds, a gorgeous buck appeared. He came straight to-ward me and then stopped only 25 yards away on high alert. I knew it was only seconds until he’d catch my wind, but I had no shot. When he bolted, I drew my bow. I mouth-grunted, and he stopped broadside at an estimated 30 yards. My arrow pierced both lungs, securing a beautiful opening-day Pope-and-Young-class buck.

That hunt often makes me wonder how many hunters miss some of the best whitetail hunting be-cause of hot temperatures, insect swarms and zero rutting activity. Do you hunt the early archery season? If not, I suggest you start. And should you try your hand at it, following are some points that will guide your pursuit.

The whole point of hunting opening week is to take advantage of hunting when fewer hunters are afield, as many wait until at least mid-October to get serious. Less hunting pressure means more relaxed animals. Deer are usually still on their summertime tendencies, and they haven’t been hunted for approximately 7-9 months, depending on your state’s or province’s season dates. With the right approach, you could get a beauty of a buck to walk by within bow range during opening week.

Unlike the rut when anything can happen, opening-week bucks are best targeted with some pre-hunt scouting. Of course, your scouting must be absolutely discreet, or you could alter a buck’s pattern, losing your opportunity to harvest him. To that end, you must make every effort to re-duce your impact.

If you’re hunting your home state, I believe setting trail cameras out early and letting them run is a great way to reduce impact and find a buck to target. That’s especially true if you go with a wireless camera like those in CuddeBack’s CuddeLink family that transmit images via text and e-mail.

To supplement that strategy, look for opportunities to glass agricultural fields from several hundred yards away so that you don’t disturb deer. Bean and alfalfa fields are deer magnets during the weeks leading up to the season opener. The duo of the trail cameras and long-distance glassing can help you find a buck and plan a likely setup prior to opening day.

Now, on traveling public-land hunts, I usually skip the trail cameras to reduce impact since I’m unable to place them well in advance. Glass fields if you can, but if you’re hunting an area with heavy timber and limited visibility, your best bet might be to avoid scouting and go with a hang-and-hunt strategy, which we’ll discuss next.

Some of the top deer-hunting experts agree that your first time hunting a stand — pending ideal conditions — is your best chance to kill a buck from it. If you’re hunting in the timber on a trav-eling hunt during opening week, you likely don’t have stands in place. Not knowing exactly where deer bed means that every visit to the timber introduces some commotion and human scent, which can impact deer movement. In this case, combining your scouting mission with a hang-and-hunt approach means one trip in, not two or several. And this can be the ticket, taking a buck by the element of surprise.

During hot conditions and especially when rainfall is sparse, hunting over a small water source in an area with limited water sources can be very productive. This reminds me of a trip to South Dakota for the season opener one year when it was hot every day. When it reached 93 F one af-ternoon, I found a waterhole amongst some cedars and rolling hills. It had some deer tracks around it, so I immediately crafted a natural ground blind and started hunting at about noon. Within an hour, a doe came to drink, then a young 8-pointer. I was encouraged.

About half an hour before dark, a big 8-pointer ghosted from the brush and dunked his lips into the pond, facing toward me. I was ready to draw and take him as soon as he shifted right or left, but he had other plans. He spun 180 degrees and walked dead away from me in one, smooth motion.

I hunted that pond the next evening, and the same buck returned, but this time it was too dark to shoot when he arrived at the water. He won. But, that proved to me that two plus two equals four. In other words, whitetails need water, and when it’s hot and dry, a water source can be an excellent place to target a buck.

4. Use an Ozone Generator

In September and October in the Midwest and similar climates, it’s nothing for daytime tempera-tures to be 30 F hotter than nighttime temperatures. This has a great bearing on thermals. On evening hunts, expect thermals to begin dropping during the last 45 minutes or so of daylight. That means that even if you planned your hunt around the wind, you could still get busted if a deer walks underneath you. And being smelled by a mature buck practically guarantees that you won’t kill him within a week at the location where he smelled you. Wind is critical all season, but especially during early season.

Now, I only use what I believe in. And I’ve had enough success stories with my Ozonics units to make them permanently part of my gear. From whitetails to elk to muleys, I’ve had numerous animals directly downwind, oblivious to my existence. Once, I had a cow elk 7 yards away and perfectly downwind, and my Ozonics flew me under the radar. I believe in it so much that I’ll even hunt spots with less-than-ideal wind directions.

5. Have an Exit Plan

It’s always enticing to hunt a field edge where a dozen or more deer are coming out to feed. But, you must consider what to do in the event that your target buck either doesn’t show or stays out of range. When darkness falls and it’s time to climb down and stop hunting, you’ll have a di-lemma. Multiple deer will be munching away, well into the night, and if you climb down and walk through them, you could greatly decrease your odds of succeeding on a future hunt.

There are two ideas. First, look for a subsequent stand location away from the field that will al-low you to encounter deer heading for the field, but also allow you to exit the property without blowing deer off the field following your hunt. If that’s not an option, the next best bet is to be picked up by someone on a tractor or even in a truck. On public lands, this is rarely possible as vehicular access is typically restricted to parking areas. On private lands, though, it’s a great op-tion.

I’m not saying you should entirely avoid hunting over a field. I killed a great September buck many seasons ago on an alfalfa-field edge. But, just understand that hunting a field edge where deer are feeding right before dark and into the night presents challenges if you don’t fill your tag that first time in.

There’s more to the story than the five points I outlined above, but I consider those to be some of the most important in putting together a successful opening-week hunt. The best part of all is that fewer hunters go afield during opening week than during the first week of November. You’re usually hunting non-pressured deer that are moving naturally between bedding and feeding areas. That, my friends, is reason enough to endure hot temperatures and mosquito swarms in search of a big buck.