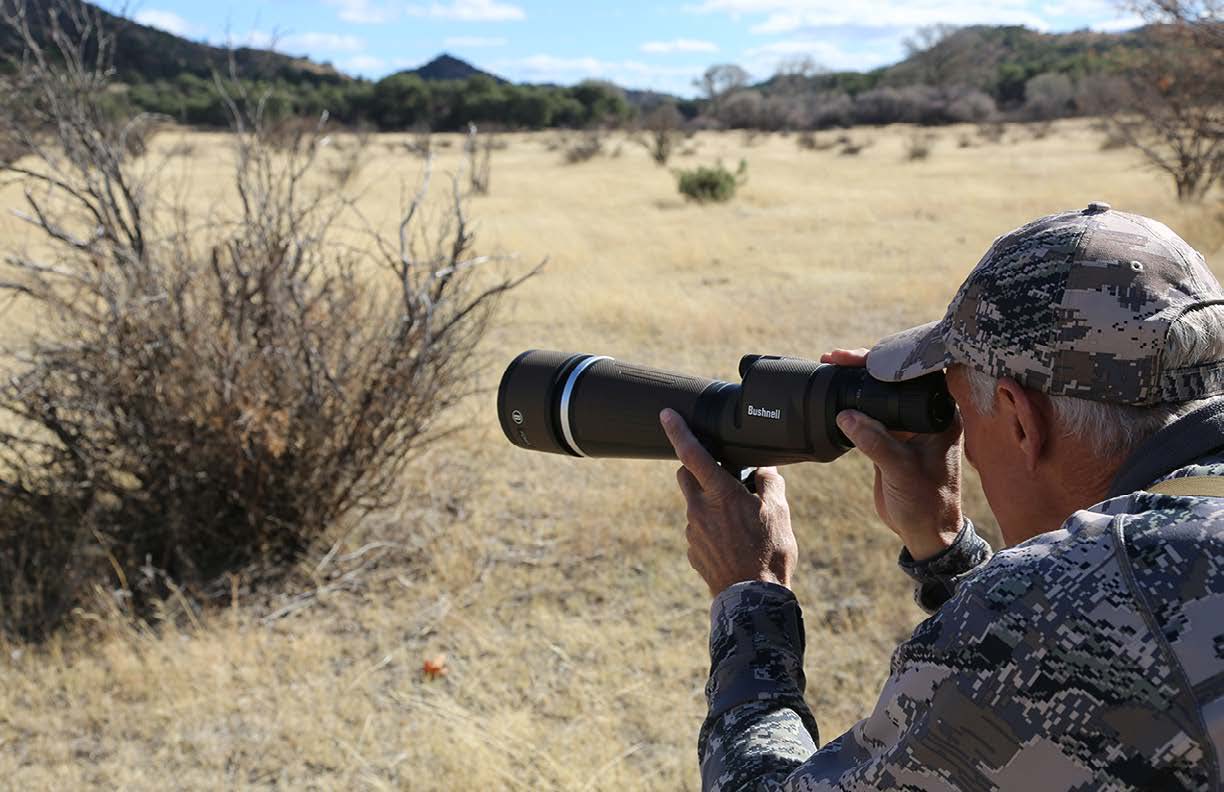 Visiting Mexico for a Coues deer hunt, I looked forward to warming temperatures compared to the frigid, sub-zero deep freeze at home. The elevation of the Sierra Madre mountains in northern Mexico, combined with the winter months and the sun being low on the horizon, generated warm days and cold nights. Leaving camp in the moist, predawn air, a heavy layer of frost forced me to pull on an extra jacket to pre- pare for our drive to the hunting area.

Hunting Coues deer means using the early-morning darkness to reach a vantage point. From there, you can spend the day glassing the vast, rugged landscape for the gray ghost of the desert. Ted Jaycox, my guide and owner of Tall Tine Outfitters, was bubbling with enthusiasm as we drove from camp.

The twists and turns in the road led us to a dry creek bed where Ted parked our side-by-side before pointing at the silhouette of a steep ridge. Headlamps were required in the unforgiving landscape. I tried to keep up with Ted as he scurried up game trails to get to the crest of the rocky outcrop. We settled under the meager cover of a pine tree and went to work glassing the adjacent ridges for movement.

The sun had not broken the eastern horizon before I spotted an ear. I watched it intently, waiting for it to move and transform into a whole deer. I described the exact location to Ted to allow him to zero in on the body part hundreds of yards away. We both locked onto the piece of deer and watched for 10 minutes before we could finally make out that it was a doe. We scanned the nearby brush for a buck, but nothing else materialized, no matter how hard we tried.

We stayed on the ridge and glassed until midmorning, locating several bucks and does. Not finding a mature set of antlers, we hiked back to the creek bed, where we left our ride, and traveled farther into the mountains. Ted had a new spot he wanted to hunt, and we finally parked after maneuvering our way through a broken trail. Climbing to a rise, we had an excellent vista of steep mountains, timbered ridges, and rocky creek bottoms.

Ted’s uncanny ability to pick apart the habitat meant it didn’t take us long to find deer. Several bucks worked their way across the high ridge behind us as several does and fawns went downhill to water. We had been glassing for nearly four hours when Ted announced, “I’ve got a buck.”

With specific reference points on the ridge, Ted led my binoculars to white antlers under the cover of sprawling tree limbs. The antlers swayed back and forth as the buck scanned his surroundings regularly. The deer’s body was concealed entirely, and it wasn’t easy even to make out the neck or head. We set up a spotting scope to have a better look and were able to judge the buck at 110 inches.

Ted knows Coues deer exceptionally well and gave me a quick tutorial on how to field judge the antlers. I was impressed with the mature antlers with long tines and main beams. The buck would score to qualify for the Boone and Crockett record book, and my heart started to race with excitement.

I expressed interest in stalking the buck and found a secondary ridge in front of us that would put us within 400 yards. Long shots are typical on Coues deer hunts, but I wanted to get as close as possible. We tried to advance but ended up cut off by a deep ravine. Ted liked the deer but kept telling me about several unbelievable bucks he had seen in the area. Although we had a great buck spotted, it was still the first day, and he eventually convinced me to hold out for something bigger.

The second and third mornings started the same as the first. Out early, climb a steep ridge, and spend the day glassing. Ted and I were joined by Charles Oberly, another guide who had helped his client tag out on the first day. An extra set of eyes would be a welcome addition to the game of Coues deer hunting.

As the sun rose, deer moved from open areas and into cover. We spotted dozens of deer but not the one we were after. Ted described a monster buck with towering G2s that would likely gross over 120 inches. It was the kind of story that had me glued to my binoculars in hopes of catching a glimpse of the elusive deer.

An elevated plateau provided a bird’s eye view of several ridges. We had spent most of the third morning in the same spot when Charles caught a glimpse of a big buck with his naked eye as it disappeared into cover. The deer had inconspicuously fed out onto the ridge across from us without being spotted. When Charles picked up the movement, our scent was blowing in the buck’s direction, likely sending him trotting for cover. Everyone glued binoculars to their eyes to pick apart the far cover. After 20 minutes, Ted found the deer standing in the long shadows on the bottom edge of the ridge. The antlers drew immediate excitement, but after a good look, we realized the G3 on the left side was stunted.

Hunting Coues deer takes more patience and focus than any other type of deer hunting I’ve ever done. The challenge is often overwhelming. The deer are next to impossible to see, and you must look at dozens before getting a glimpse of a big, mature buck. Often the best antlers are roaming where they are tough to get to, and one never knows where they’ll be by the time you get to the last spot you saw them.

Day Four was on a new ridge overlooking some incredible deer country. Shortly after the sky started brightening, I spotted two bucks below me. One was a big-framed buck with long tines. My heart raced at the thought of finding a deer worth stalking, but we quickly ruled out the deer as it had a short G3. We all marveled at the old deer and wished his antlers had that little extra.

Midmorning is when things heated up, as Ted spotted a big deer moving uphill two ridges over. I never did see the buck, but I could tell by Ted’s excitement that it was a good one. We headed up the ridge, moving carefully and stopping to glass after each step. We spotted several does and were surprised the buck wasn’t with one of the ladies. We reached the saddle where Ted had last seen the deer and sat down to glass the area. As is often the case, the deer vanished. Who knows if it continued to run for two more ridges or turned to head in a different direction after hitting the saddle? I felt mildly dejected but kept vigil with my optics to dissect every rock, bush, cactus, and shadow.

Day Five started with an uneasy feeling in my stomach. The hunt days had quickly disappeared, and I re- fused to think about leaving Mexico without a nice Coues buck. Like any deer hunting, persistence usually pays off, and we were back out a ridge over from where we had seen the big boy the day before. 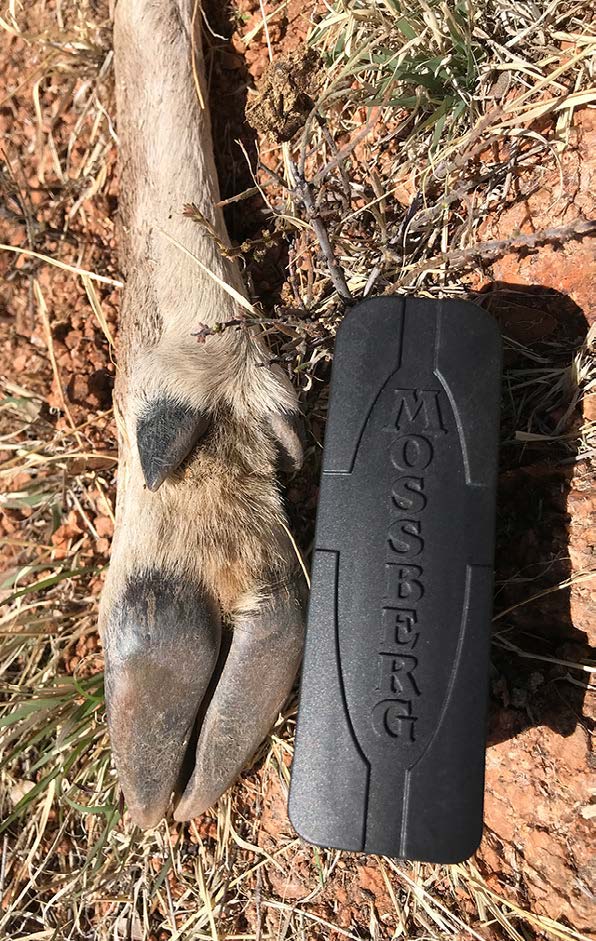 The desert sunrises and sunsets had been spectacu- lar and worth the trip on their own. Dawn broke with sunshine lighting up mountains and hills with glorious detail. An hour after sun up, Ted spotted several bucks high on a mountain to the north. The deer were spread out and feeding towards cover, where they would soon hide from the increasing heat of the daytime sun. We watched two mature deer travel nearly a mile before finding a preferred bedding spot.

One buck traveled farther down the ridge than all the others and ended up under a lone oak tree in the middle of an open sidehill. We discussed the deer for a long time, and its perfectly symmetrical antlers persuaded us to make our move. A long meadow and two steep ridges between us meant we would have to hurry to get to the deer before the sun got directly overhead and forced it to find better cover.

Ted and I belly-crawled out on a gravel plateau to set up a pack to shoot off in the prone position. We edged to the few shrubs lining the top edge and confirmed the buck was still in its bed. The deer was about 230 yards away, and I was ready to make the shot. However, we had to wait for the deer to stand up and offer a broadside shot.

Ted got nervous and said the deer would likely stand up and walk out of sight in seconds. A minute later, the deer stood, hugging the remaining shadow of the tree for a second. The deer took a few steps uphill to where we could not see it around the tree. Seconds ticked by, and no sign of the buck. Had he slipped away uphill undetected? The anxiety these little deer can create is impressive. I saw the nose of the buck poke out from behind the tree, and Ted said, “He’s moving downhill.”

I had to move my rifle on my rest to keep up with the fast pace of the buck and locked my crosshair on the front shoulder as it walked briskly towards the creek bot- tom. I only had seconds before the buck would disappear behind the edge of an adjacent ridge, so I tightened up on the trigger.

My Mossberg Patriot rifle barked, and the deer disappeared. Ted jumped up and ran to the side for a better view of where the deer had gone. Charles had been watching the whole scenario from behind us and let us know the deer had dropped in its tracks.

I was so anxious to see my deer up close that I ran down the ridge and up the next. The white belly eventually came into view, and my Coues buck was finally in my hands. The hunt had been more exciting than I had ever dreamed, and the whole experience left me wanting more.

Ted called one of the cowboys from the ranch, and soon my buck was strapped over a saddle horn and headed downhill. That evening we feasted on braised Coues deer front shoulders, cooked with the bone in, and I pledged to someday return to the desert to chase these tiny deer another day.