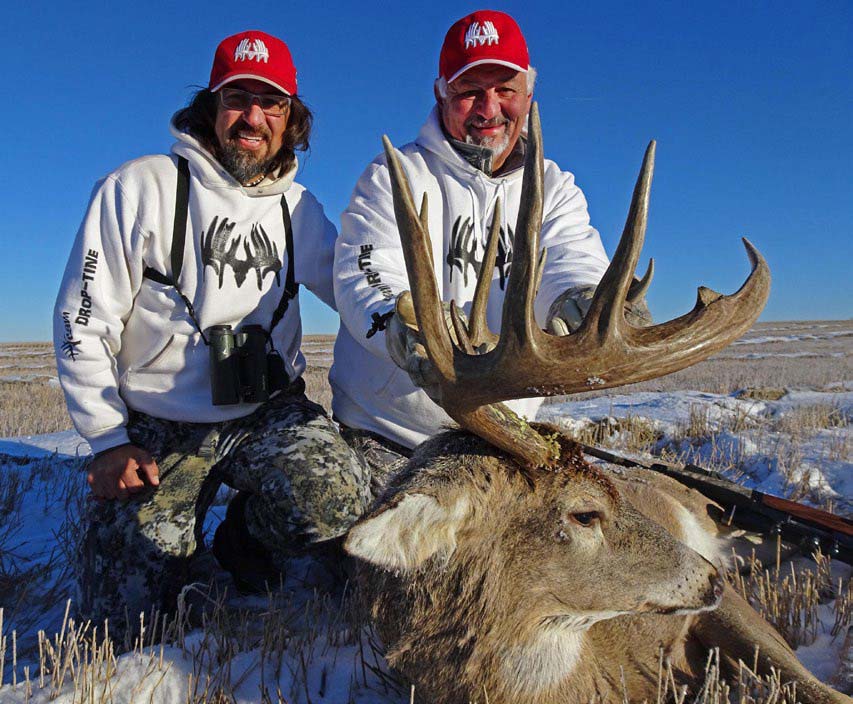 Dad and I had hunted hard but the whitetail season was down to the wire with one day left in the season. It was overcast and -30 degrees Celcius, a cold front had moved in and we knew this could work in our favour. It was around 9:00am when Dad spotted a buck and with the naked eye, we both knew this was what we had been waiting for. A look through the Swarovski Spotting scope revealed a GIANT, with extra points off both sides, we knew we were looking at a 200” whitetail.

I’ve had some of my greatest success and killed some of my biggest whitetails in the Post-Rut season, when most hunters have admitted defeat, putting away their gear for the season. This is one of my favorite times to get out and hunt these elusive monster bucks.

During the rut a mature buck will let his guard down and travel extensive distances in the daylight hours, giving a hunter the upper edge. Although the post rut can be tougher hunting, I feel this is the time for a dedicated hunter to have some of his best chances at notching his tag on a giant buck.

Although mature bucks will usually travel more and expose themselves more in the peak of the rut, the post-rut period can provide a hunter with some great opportunities. First and last light will be the key time when you want to be out touring the countryside looking for that buck of your dreams. Pay close attention to food sources as these mature bucks will now be trying to put weight back on after the rigors of the rut have worn them down to skin and bones. I like to spend more time behind the wheel of my truck putting on some miles, paying close attention to large concentrations of whitetails, as feeding areas are the key to finding a big buck.

But I have also caught big mature bucks out mid-day in the post rut, heading back to familiar ground, after getting carried away in their search for hot does.

Out Of Sight – Out Of Mind 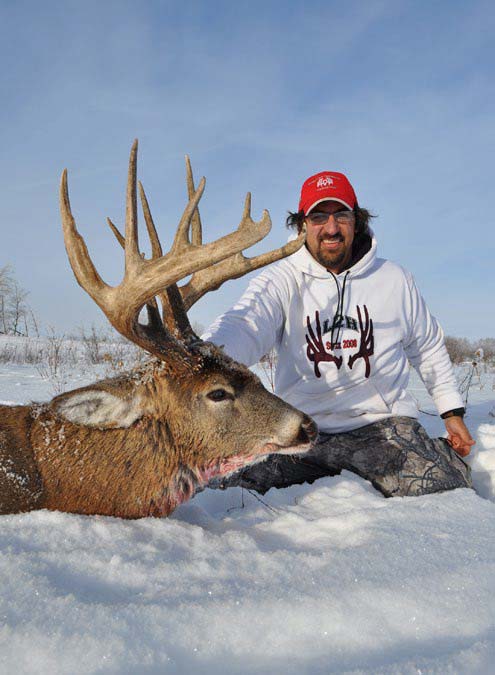 When I’m out on a tour, I always try to pay special attention, using the snow to my advantage to find the major travel corridors where the deer are moving to and from. A large buck will feel more comfortable using a remote spot that is tucked away from the beaten path. A hidden field or a few swaths left uncombined along a brush-line, places that they feel more comfortable using in the daylight hours to pack as much food away before our harsh Canadian winter sets in. If you are out all day, get out for a mid-day walk in the woods. Watch closely on south-facing ridges and old abandoned yard-sites as key spots such as these will hold big bedded bucks trying to take advantage of a little mid-day sun to help them conserve their fat and energy. Glass fields, get on a high spot with your spotting scope and glass field edges. Keep your Phone Skope handy to get pics of up & comer bucks or a big guy before you head after him, live photos of a buck are a great keepsake and a Phone Skope is worth its weight in gold. If you are focusing on the key times, try to watch for a field tucked away, hidden by trees or a spot that has tough access. The harder a place is to get to, the more comfortable a monster buck will feel. If you can find these spots, there’s a good chance you will cross paths with a monster.

I’ve had great success hunting when a cold front is moving in or a drastic weather change is taking place as this sometimes forces a large buck to head out a little early to feed as they know what the weather is planning to do better than the best forecaster. A monster buck worn out from the rut will sleep the warm days away, but a cold front triggers them into moving early, feeding more often, increasing your chances. I have had my best luck hunting over a food source as a cold front is approaching, with the daylight activity doubling during these times. 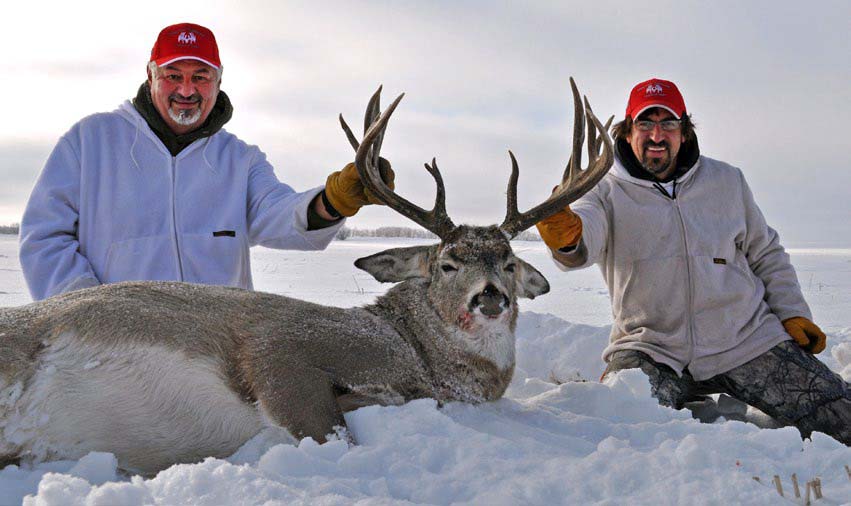 I’m not a huge fan of a deer drive myself but it is a very effective way to kill a big buck in the post-rut. I have never liked hunting this way as it’s so hard to judge what you are shooting at when a buck busts out running at warp speeds, although there have been a ton of monster whitetails killed this way if you can round up a few guys. Myself, I have had better luck cutting a big track in fresh snow and bringing my bow-hunting skills into the game, sneaking along trying to catch the buck bedded. Walk quietly; take a couple steps, stop, look and listen, paying very close attention to deer tracks, trails and beds. 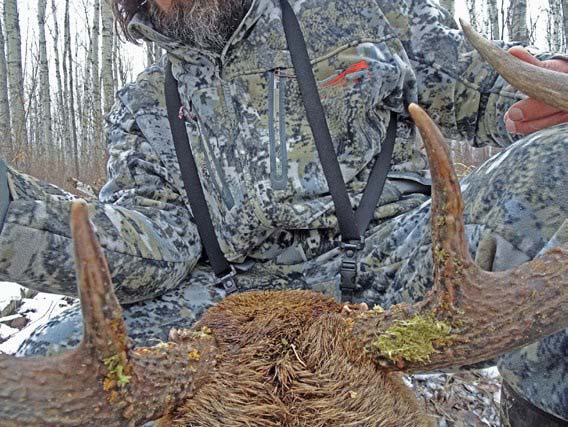 If you’ve found a bruiser buck but are unable to connect with him in the open, it’s time to move in and set up a blind or stand along a main travel corridor. When setting up in these spots, watch for lots of tracks and main trails, trying to utilize an area with a natural funnel on a ridge or in a spot where the trees thin. I also try to find a spot that is going to squeeze the deer by closer and where a few trails come together, intersecting into one. Move in from downwind, placing your blind or stand as quietly as possible, then back out downwind.

Be sure to use the always wind to your advantage and you will have a great chance at catching a wily old brute as he travels to and from his hideout to his food source. I don’t like hunting a setup like this in the morning, as it’s so hard to sneak in undetected, but if you want to be there early, sneak into your setup at least an hour before first light to avoid any detection. I prefer to save these spots for an evening hunt when I’m able to get in and setup before any deer start to make their way out to the fields for their evening feast.

If you plan to try and sneak into their travel corridors and bedding areas, scent control is a must. Whether some of the new-fangled devices such as the Ozinator or Scent Control sprays, it all helps to eliminate body odor, food and animal odors and will increase you sneaking into these areas undetected. I have had wily old veteran bucks try to sneak in down-wind of my location on numerous occasions and I’ve remained undetected by using these products. We need to do everything we can to gain the upper edge and little things like this can help a hunter to create some of his own luck, something we all need from time to time.

Trying to get right into their bubble can be super tough especially if there are plenty of deer around. If you are lucky enough to sneak in undetected, you may just have a chance at a monster buck. If you find an area that gets your mojo going, set-up close to their bedding area when the deer are out feeding and get ready for the next day’s hunt. The wind can be your best friend and your worst enemy in a set-up like this, as a cunning old mossyantlered buck will most always circle his bedding area down-wind to make sure there is no present danger or if by chance there is a hot doe nearby that has just came into her second estrus cycle. Big bucks will cover the open ground in a hurry, but once they get into what they feel is their safety zone, they will usually let their guard down a tad and slow down to browse their way back to their bed. 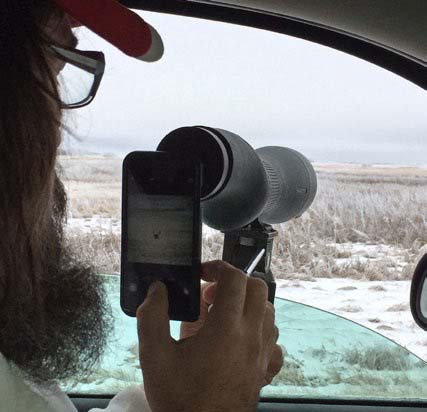 I rely heavily on my Spypoint trail cameras at this time of year, always hopeful that a new monster may show up, travelling in from another area. Providing you have decent Cell Service, the new Cellular Trail Cameras, such as SPYPOINT’s LINK MICRO or LINK DARK, are an amazing tool when placed in funnels or along travel routes, sending the pics to your cell phone, so you know what is traveling the area every day. Many times new bucks show up in this Post-Rut period as they travel to new areas for food and the chance of coming across a doe-in-heat. Your trail camera will provide you everything you will need, what new bucks are around and when they`ve been on the move.

Even though the main rut has come and gone, there are always a few estrus females that have yet to be bred and a big buck just may cover ground in search of his last little bit of loving for the year. Around 28 days after the peak of the rut, the second chance for a lucky, love-struck buck comes around to find the does that were missed earlier as well as any yearling does. By spending some time in an area with a heavy concentration of does, you might just be lucky enough to cross paths with a love-struck monster, that’s hot on the trail of a doe-in-heat. Find it and they will come. You may sit waiting for days for that bruiser to show up, but when he finally appears, you’ll be thankful you did! 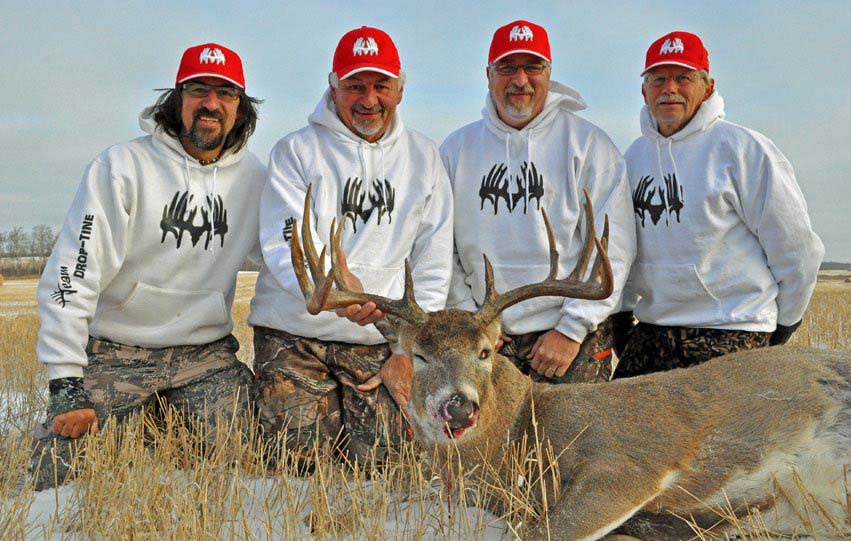 The biggest thing about hunting the post-rut is the temperatures are usually well below freezing and if you plan to spend any length of time in your blind or stand, you need to be prepared. I prefer a blind so I can tuck myself out of the elements… The Canadian cold can be bone-chilling, mind-numbing and if you aren’t prepared you won’t last long. Take plenty of clothes, layer up and wear the warmest boots you have. There is a nifty product called a Heater Body Suit that you can zip yourself up in and will keep you warm, but I carry a little Mr. Heater to my blind. It’s incredible to have that warmth when you need it and it will take the edge off in a split second, warming your feet and your hands. Remember if you’re toasty warm, this means more time spent in your blind, increasing your chances of success.

I may be a tad hardcore when it comes to hunting, but one of my favorite times to hunt is in the post-rut, you will usually find less hunting pressure, a little more consistency, hopefully allowing you to capitalize on the chance you’ve been waiting for.

So remember, when the rut is winding down and you’re discouraged, don’t put away your rifle and give up just yet… I’ve shot some of biggest bucks in the witching hours of the season, this is the BEST time to PATTERN a POST-RUT BUCK!