Teaching the Next Generation of Deer Hunters 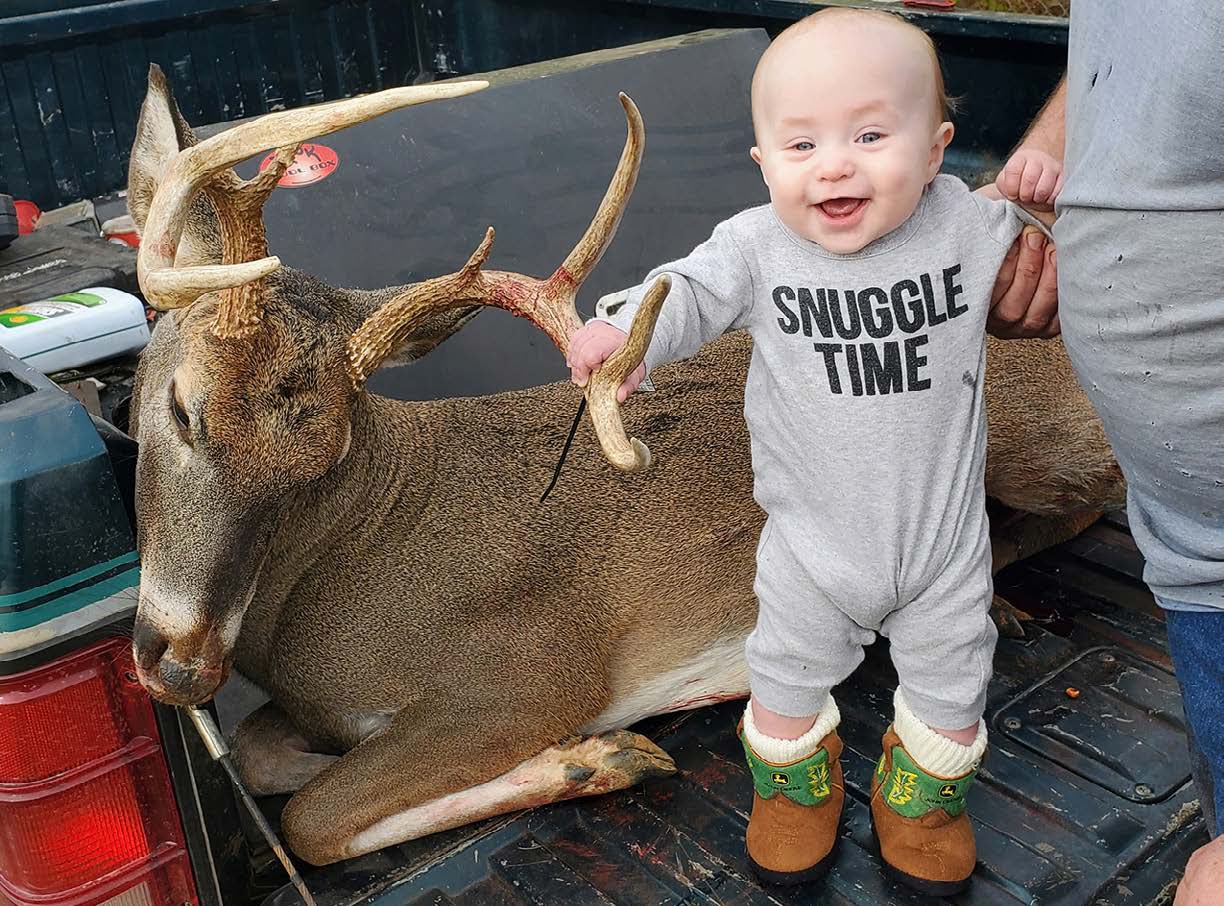 Deer hunting might be an endangered outdoor sport. According to the North Carolina State University College of Natural Resources, the hunting industry appears to have peaked in 1982. In the intervening decades, the participation of hunters has dropped by about 18 million. These statistics are tracked according to the hunting licenses being sold nationwide. If you read between the lines, the subtext is clear: there aren’t as many youth hunters today as there used to be. As older hunters pass away, fewer kids are getting involved. The quotient isn’t balancing out. If you don’t take your kids deer hunting, my first question is likely to be, “Why not?”—followed by a simple statement that you are missing out. Kids are the future of deer hunting and there are countless reasons to get them out in the fields and woods.

Maybe the idea of “tradition” evokes images of old, bolt- action rifles and dilapidated cabins. Or, perhaps you, like me, weren’t raised in a hunting family. Just because you didn’t have these traditions filling your time as a kid doesn’t mean your own kids can’t have them now. There is something to be said for passing on deer hunting knowledge. Not only does this activity provide bonding time with your kids, but it also gives you the opportunity to teach them responsibility, patience, and valuable life skills. Now is the time to start your own traditions.

Getting Out of the House

If there’s one thing the current generation of kids does do, it’s stare at electronics. Smartphones, iPads, and the ease of streaming anything and everything on TV have taken over. After all, it’s easier to sit inside in the air conditioning and stare at a screen than it is to hike through the woods carrying a backpack and rifle. It might be a cliché, but it’s true that nothing worth having is easy. Changing the narrative in the lives of your kids so they grow up outdoors—like you probably did—is worth the time and effort. Sure, kids might fuss about being dragged outside to sit against a tree or in a blind, but what do you think they’re more likely to remember? That YouTube channel they streamed in the living room when they were 10 years old—or the time they spent with you in the deer woods, eating jerky and sharing whispered secrets?

In today’s instant-gratification society, patience is be- coming a thing of the past. There’s not much more to im- prove your ability to sit quietly and calmly than waiting on a deer. Do take the age of your kids into consideration when planning hunts, though. It’s more difficult for small children to sit still than it is for older kids, so start with shorter hunting trips for them. Don’t expect kids who are young and still learning to be able to behave years beyond their abilities. Tailoring hunting expectations to your kids’ ages and abilities will go a long way toward making them love deer hunting, rather than resenting it.

There’s an enormous amount of responsibility to hunting deer. Before you even get to the blind, your optics need to be zeroed, you have to undertake practice at the range to ensure an ethical shot, and attention must be paid to clothing and gear in general. In addition, deer hunters have to get up early to reach their chosen spot before their prey gets moving for the day. That also takes discipline on the part of the hunter.

Learning to be patient sitting in a blind instills responsibility, as well. If your kids are loud and running around, there won’t be any deer showing up. If they can be quiet, they’ll probably get some action. You can encourage kids to take a seat and watch by supplying them with a camera and binoculars. A great idea for older kids is a laser rangefinder, which teaches them how to accurately judge distances. That’s a skill that comes in handy both in the deer blind and out in the world at large.

Making an ethical, one-shot kill is a significant responsibility. Kids learn that being humane in their hunting practices is important and that the outcome rests in their hands. They must learn to shoot only what is within their ability to take down and to not outstrip their existing skills by trying to take excessively long or oddly-angled shots.

Once the deer is on the ground, responsibility comes into play again for field dressing and getting the animal back to the truck. This is also when kids learn how to safely handle knives and the right way is to dispose of the few animal parts that won’t be used.

Post-hunt, there’s a lot of processing to be done. Since they shot the animal, they can help cut it, grind it, and vacuum seal it. The reward of their first meal eating the meat they’ve hunted and processed themselves, with their own hands, is enormous.

There are so many teachable moments during a deer hunt that it would be nearly impossible to list them all.

This concept might seem like a conflict, considering that the goal of a hunt is to shoot a deer, but most hunters have fantastic respect for the game they chase. By going deer hunting with you, your kids will find out that while nature might be brutal, there’s also kindness. There’s gratitude to the deer for the meals it will provide your family, there’s enjoyment in watching wildlife move through the grass and trees, and there’s an entire circle of life being continued.

Conservation practices can suffer when the numbers in hunting decline so sharply. Hunters are some of the biggest supporters of conservation out there, and our kids need to understand what that means. We don’t simply hunt, we support wildlife. The money that goes into licenses and tags helps support wildlife. Taking older animals allows younger ones to thrive. In states where baiting is allowed, the food that feeders put out is eaten by all types of animals, including birds. Food plots also feed anything and everything.

Teach your kids to not only clean up after themselves outdoors but also to pick up trash they come across. Not everyone has respect for nature, but we do, and our kids can carry on that tradition. Keeping a garbage bag in your pack to put any found garbage in is a good idea. So is spending time cleaning hunting areas outside the regular season.

Kids need to know and follow the rules of gun safety:

Spending time on gun safety isn’t just for hunting; it’s for life. Giving kids the knowledge needed to be safe around firearms makes them smarter when handling or being near what is ultimately an inanimate object that people can use to do bad things. The guns themselves are not a problem. Being familiar with guns takes away some of the mystique of firearms, so kids are less likely to mess with a gun they shouldn’t be touching. As with all life skills, these issues are specific to age. Teach your kids about guns as is appropriate for their age and understanding but try to start young. Make it a natural part of life, not a mystery we don’t talk about. Guns are tools and should be treated as such.

Taking your kids out after deer hunting together isn’t only a bonding experience, and it isn’t simply about putting meat on the table. It’s amazing how many things you can both learn while scouting or hunting. It’s also a lot of fun watching kids as they learn to hunt. And really, it’s never too soon to get started. I started taking my son hunting with me when he was six days old. My oldest is now 19 and she still hits the fields and woods with her favorite rifle.

A note about the moments after a successful hunt: don’t lie to your kids and tell them you’re taking the deer to the vet to be fixed. Conversely, don’t make light of the sacrifice the deer just made for your family.

Deer hunting is an adventure, and sometimes we lose sight of that after years of scouting, setting up blinds, and sitting in wait. Taking your kids along for the hunt isn’t just good for them, it’s great for you, too, since it can remind you why you got into hunting in the first place.

What are you waiting for? Load up your kids and hit the woods!

Kat Ainsworth Stevens loves nothing more than a day spent in the woods or on the water. She has hunted all over the country for everything from deer to ducks to alligators. Her fishing endeavors range from setting juglines for catfish to catching rainbow trout in mountain streams. And while she’s out hunting, fishing, hiking, and boating, she’s putting gear through its paces.
Kat is a seasoned outdoorswoman with decades of experience in various activities. In addition to her outdoor activities, she is a certified firearms instructor with an extensive background in firearms, edged weapons, and use of force. Her written work has been published in dozens of print outdoor industry magazines and on sites. She has a book—Handgun Hunting—available and has ghost-written others.

View all posts by Kat Stevens