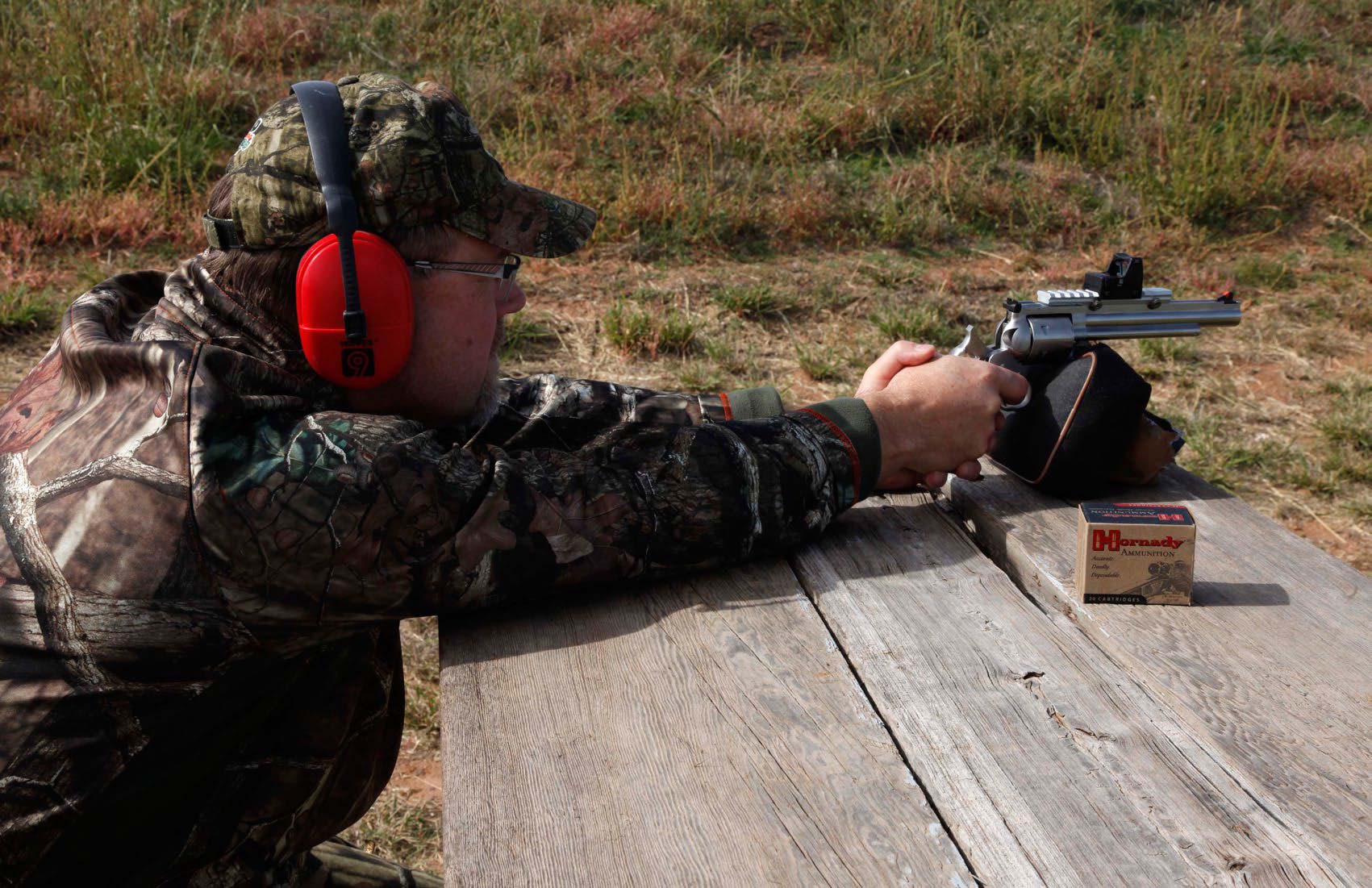 Sharing an elevated blind with Larry Weishuhn gave me the chance to catch up with an old friend, but the two of us talked and laughed so much I was afraid we’d never see any game. We were like a couple of kids in the schoolyard telling stories and making hand gestures when a thundering gobble from a turkey reverberated through the metal walls of our structure. We both looked with wide eyes and quit talking in mid-sentence. I slowly turned and peaked out the window to see a large flock of long-beards working their way towards us. One of them had an impressive beard, and I never took my eyes off him. Larry leaned toward me and said, “go ahead and shoot one—it won’t bother the deer.”

My Bushnell range finder measured the old bird at 56 yards, and as I slowly cocked my gun, red heads popped up to identify the foreign noise. I rested my gun on the edge of the window sill, picked the exact feather I wanted to hit on my turkey, on the top of the wing, and slowly squeezed the trigger. “Boom!” The turkey flew straight into the sky, angled towards our blind, and came crashing down into mesquite right in front of us. Larry and I roared with excitement, and he congratulated me on my first ever handgun kill. 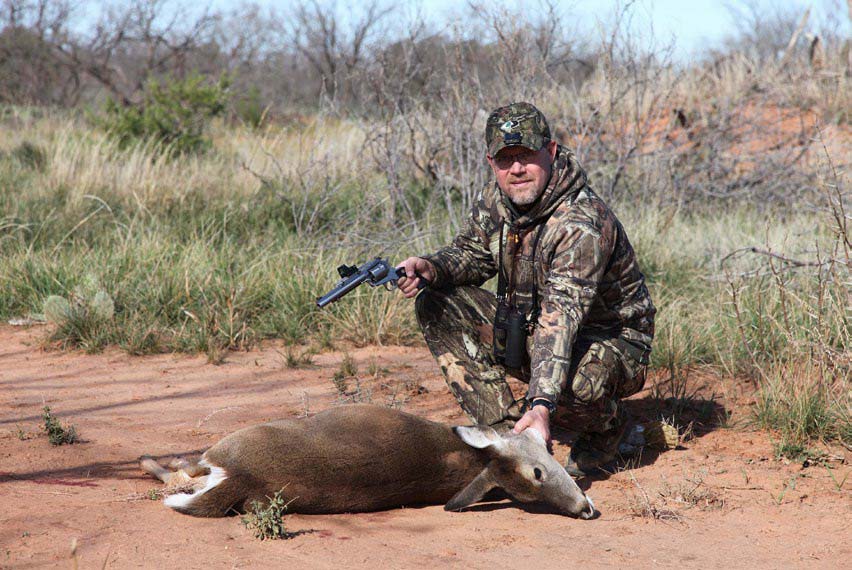 Living in Canada, I don’t get the opportunity to hunt with a handgun often. When I found out there was an opening on the Ranger Creek Ranch, I couldn’t resist when some friends planned a hunt.

I flew into Dallas, Texas, and got to the ranch with just enough time to sight in my Ruger Super Blackhawk, single-action revolver in .44 Rem. Magnum. I shot a nice group at 50 yards, thanks in most part to the illuminated reflex sight mounted on the gun, where all I had to do was hold the red dot on the center of the target. We got a quick briefing from Holly Clabaugh, the chief guide at the ranch, and she showed us trail camera photos of some of the bigger whitetail bucks they had been seeing. Hunting Texas whitetail was a treat for me, as they seem like a different species than what I hunt at home. Doing it with a handgun made it challenging and a unique adventure I’d always wanted to try. 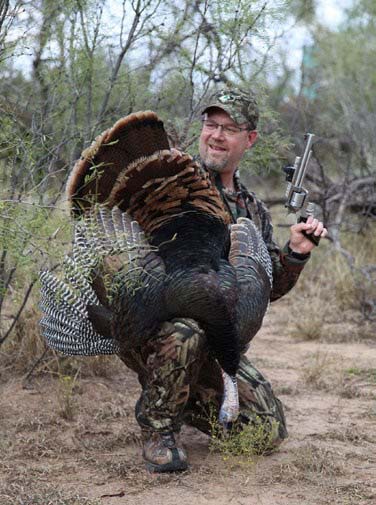 We made time to photograph the turkey before heading back to the ranch for lunch and a chance to regroup during the heat of the day. I took the time to shoot at the range again and hone my skills with my revolver. My bullet groups were getting better all the time, and the more I shot, the more confident I was that I could take anything with the handgun.

I went back into my stand for the evening, and although I had several does feed close, the buck I saw never slowed down enough to offer a shot. I only had three days to hunt but was confident I’d get a chance to use my revolver again.

My second full day of hunting was similar to my first. I saw a couple of does and fawns regularly, but the bucks seemed to be making themselves scarce. The weather was cold by Texas standards and was being blamed for the lack of movement when rut activity should have bucks running large areas. I was glad I had cold-weather gear like I would use at home to stay comfortable and in the field for the entire day.

My guide decided to move me to a different stand on the third and last morning of the hunt. We climbed into the blind when it was so dark that I couldn’t’t even see the chair to sit down. Larry had joined me again, and as we whispered back and forth, a pack of coyotes lit up about 100 yards away. As daylight neared, I could make out dark outlines moving on the Sandero. At first, I thought I was seeing things but could hear their hooves on the ground, confirming they were deer. 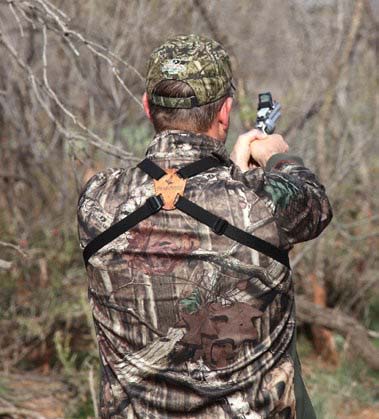 As daylight emerged, it brought the mesquite to life in a vibrant display of color. Two groups of does fed within sight as they wandered with a purpose to pick out the best feed. I glanced over at Larry, and behind him, I could see a buck on the edge of the heavy brush, which sported an impressive ten point rack. However, before I could get into position for a shot, it faded back into the tangle of branches. A moment later, one of the coyotes we heard earlier emerged on the Sandero, making me suspicious that it had kept the buck from venturing farther.

Larry immediately pursed his lips, making a squealing sound like a distressed cottontail, and the coyote came running towards us. At 42 yards, it stopped, and I was already ready, placing the red dot on the chest of the deer-spooking yodeller. At the report of the gun, the coyote fell to the ground, without as much as a twitch. I quickly looked back down the trail behind me to see the deer continue to feed as though nothing had happened.

When the deer finally dispersed, and the coast was clear, we retrieved the coyote and quickly got back in the blind to continue our deer hunt. There was a steady parade of action in the mesquite across from us, and I could catch glimpses of deer moving back and forth. About 200 yards down the Sandero, a buck finally showed up, trailing two does that were headed our way. The does eventually came right past the front of our blind. However, for some reason, the buck veered off and disappeared into the mesquite behind us before coming into range. We sat patiently, hoping the rising sun wouldn’t slow the deer activity.

A group of does emerged from cover to start feeding again, and Larry suggested I harvest one as I was licensed to do so. We knew from previous experiences that a shot would not likely impact our hunt for a buck, so I opted to shoot my first deer with a handgun. I picked out a single doe that was feeding away from the group. Initially, she was just over 40 yards, but she continued to weave her way through the mesquite away from us. Finally, at 70 yards, she stopped and offered a broadside shot. When she lowered her head to feed, I cocked the gun, rested it on the edge of the blind, and acquired the target through the sight. At first, the dot danced erratically, but as I calmed down and controlled my breathing, it steadied onto one spot. At the report of my gun, the deer dropped slightly and ran down the edge of the brush. It did not go 30 yards before it fell over and our Sandero once again sat silent.

Retrieving our doe gave us a chance to stretch our legs before returning to the blind. Several does filtered in and out of the area. In the early afternoon, a small group of javelina showed up unexpectedly. By the time I spotted the first one, it was already halfway across the opening as the others were still coming out of the mesquite. The lead animal was enormous and as it trotted across the Sandero, I picked it up in my sight and squeezed the trigger. It collapsed in its tracks, sending the rest of the wary peccaries into a spinning tizzy as they tried to head for cover. A large boar trailed the group, and Larry and I headed across the open area to see if we could catch up with it in the thorny brush. 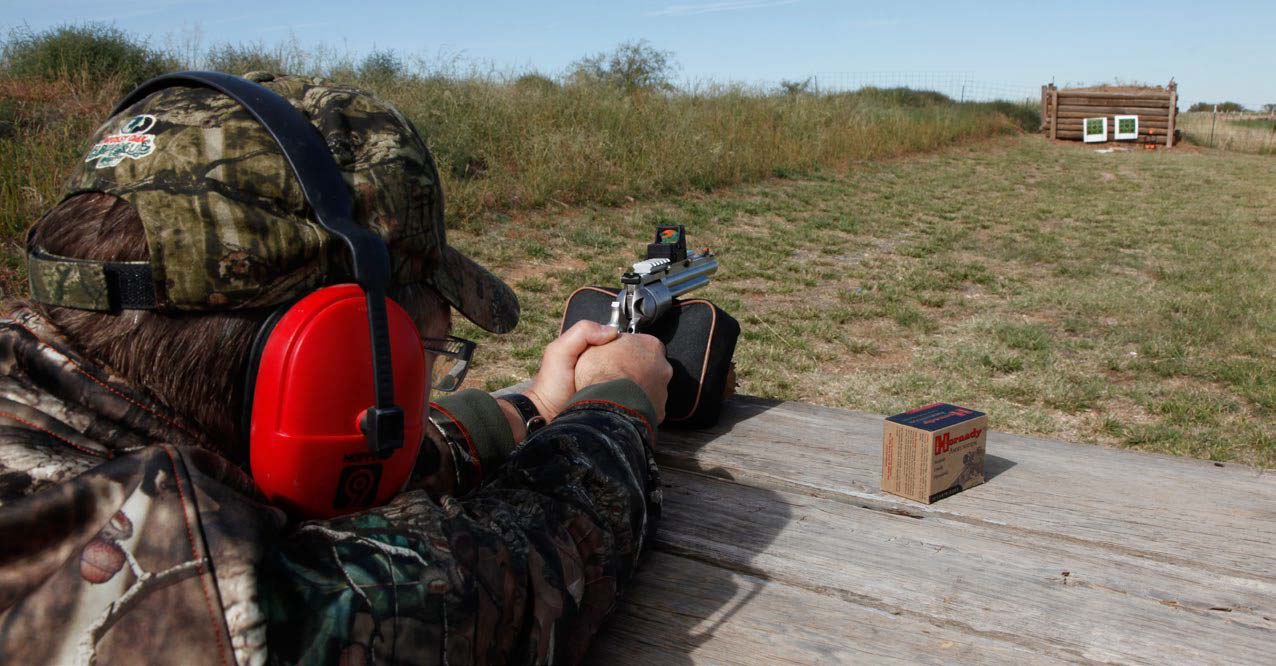 The javelinas were trying to regroup, and I could see several running in different directions. The large male was easy to pick out, and I closed the distance as quietly as possible while trying to avoid the clothes-ripping thorns. Shooting offhand, I found an opening and lined up the large-toothed critter. My shot found its target, but a follow-up shot was required to end the chase. The pursuit through the mesquite was exhilarating. Larry and I dragged our little stink pig, an endearing term given to them by the locals from the pungent odor of their scent gland on their back to the Sandero. Larry congratulated me and told me I’d have to hunt a lifetime in Texas in order to shoot another pair of javelina to rival the ones I had taken.

It had been a jam-packed trip between shooting a turkey, coyote, white-tailed doe, two javelinas and having a couple of close calls with mature antlered bucks.

We did sit the evening on the last day, and as the weather warmed, so did the rut activity. We saw several bucks chasing does through the mesquite, but none emerged to provide a shot opportunity. I was in no way disappointed in my first handgun hunt experience. The target-rich environment had me going home with several unique trophies, and being able to spend time with Mr. Weishuhn was a treat and a learning experience. Having a seasoned mentor is one reason it was easy to be successful with the Super Blackhawk. I know my first experience of handgun hunting will not be my last, as I look forward to another adventure with more unique challenges. 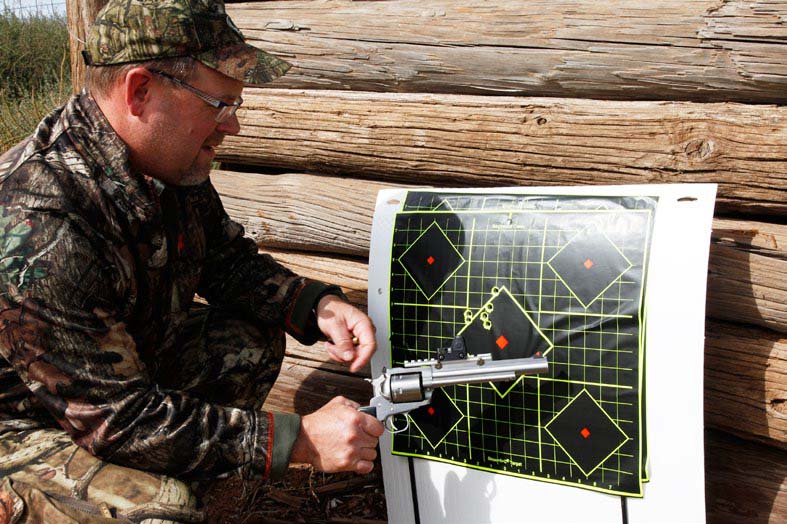 Having never hunted with a handgun, I was surprised at how quickly I was comfortable with the Super Blackhawk revolver. The fact I could shoot silver dollar sized groups at 50 yards allowed me to be successful with a multitude of game. The gun is a hefty 48 oz. and has a 7.5-inch barrel, with an overall length of 13.38 inches. It was durable, easy to shoot and the comfortable grips and managed recoil left me wanting to shoot it even more. The 1:20 twist proved to be hunting stable and consistent, and the .44 Rem. Mag. provided plenty of stopping power on game of various sizes. www.ruger.com

Having an illuminated reflex sight made it extremely easy to hunt with a handgun, acquire a target quickly and shoot accurately. It would have taken days of practice to become as proficient with open sights as I was in an hour with the RMR. It is light and agile and features optimum red-dot visibility for intuitive high-speed aiming. It was easy to set up, didn’t add excess weight to the gun, and stayed on target once sighted. The Trijicon RMR is available in several configurations for a variety of handguns. www.trijicon.com 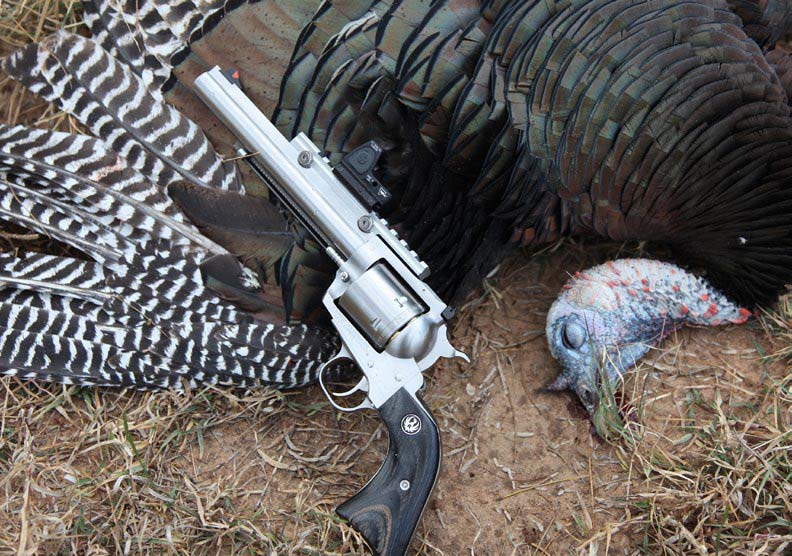 The Hornady Custom pistol ammo I chose for the hunt was loaded with the XTP (Extreme Terminal Performance) bullet, which proved to live up to its name. It has a muzzle velocity of 1,350 fps, delivering 971 foot-pounds of energy. The custom ammo works great for hunting and maintains an incredible velocity of 1,134 fps at 100 yards, delivering close to 700 foot-pounds of energy. It is a custom load with a carefully matched case, bullet, powder, and primer. www.hornady.com