The Evolution Of Trail Cams 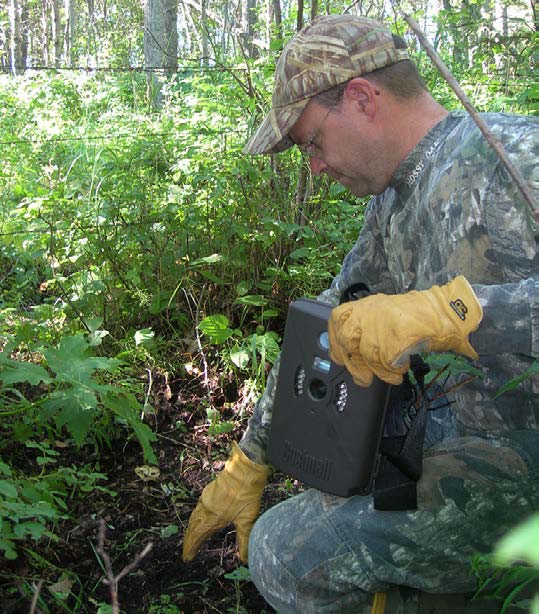 Trail cams have evolved by leaps and bounds over the past couple of decades. Almost every hunter has at least one, and many hunters maintain a fleet of them. From their humble and cumbersome beginnings with print film to today’s digital, video, and even wireless cams, they’ve literally become an integral tool for today’s hunter. Today, users can set preferences for motion sensitivity, image and video timing, delay, and quality. Some even have GPS tracking capabilities.

The biggest problem is that trail camera use has become so prolific, that they have created social issues, prompting some jurisdictions to ban them during open hunting seasons. With this in mind, let’s take a look at how trail cams have evolved over the last 20 years.

Before the first trail cameras were released to the market, I remember using trail-timers. If you were a hunter back in the early 1990s, you may recall a basic digital clock with a thread attached to it. This device could be strung across a trail and tied to a branch. When a deer or other animal passed through, it would pull the thread from the timer and stop the clock at the time it walked by.

Back then, it was an innovative invention, but it didn’t take long for a new iteration to hit the hunting scene, and then that took off with a vengeance. Less than a decade later, creative minds introduced the first print film trail cams.

It was 22 years ago when I picked up my first trail cam. Cutting-edge technology made it expensive and labor-intensive to run. Print film was pricey and taking each roll to a photo lab for developing was time-consuming. Trail cameras contained an actual point-and-shoot camera inside a box. Essentially, the camera was wired with a motion sensor that triggered the shutter. Conceptually similar to today’s trail cams, these early inventions were unwieldy, costly, and, by today’s standards, the image quality was poor.

Nevertheless, these early versions generated intel that had never before been available to hunters. Little did we know that these humble cameras were the meager beginnings of a fledgling movement in the outdoor industry, one that would eventually take on a life of its own.

With the introduction of digital point-and-shoot cameras, manufacturers worked feverishly to integrate that technology. To lower costs, some early versions captured black-and-white images. The quality left a lot to be desired and the motion sensors often missed the mark in triggering the shutter. Within a couple of years though, a handful of companies stepped up their game to improve the quality and functionality of their digital cameras. Almost overnight, film cameras became obsolete. In fact, from around 2005 to the present, the evolution of trail cams has been extraordinary!

Back then, it was the lack of energy efficiency that really hurt. Batteries were big, cumbersome, and expensive. Many required C or even D-cell batteries. Compared to the efficiency of today’s cameras, the batteries didn’t last long in the field.

Fast forward a few short years and, as more companies recognized the rapidly expanding digital trail camera trend, the race was on to diversify and improve quality, efficiency, functionality, and price point.

Companies like Cuddeback, Moultrie, Primos, Spypoint, Bushnell, and an extensive list too long to mention here began refining and enhancing commercial offerings. The point-and-shoot cameras installed in the early versions quickly disappeared and the digital workings were integrated. That made the whole camera self-contained in a newer, even more, compact design. Along with the digital improvements came the ability for users to lock the cameras with a passcode in many instances, choose sensitivity settings, select megapixel preferences, and select the number of seconds between image captures.

In my opinion, it was the introduction of motion-activated video capabilities that really took the trail cam market to a whole new level. That lift was so much the case that video has now become an integral component of even the least expensive models.

Even with these newer, multi-functioning cameras, we still had to hike out to our trail cam locations and switch out the SD cards. Sure, card readers, iPads, and even laptops could be used to view images on location, but it remained a labor-intensive if not costly activity.

Common discussions among trail camera users today focus on image and video quality. Two of the best cameras I’ve used to date are both made by Bushnell. One is a few years old. It’s a Trophy HD cam. The image clarity is exceptional, as is the video quality. The motion sensor is accurate and fast. If you’ve used trail cams a lot, you know you can get good ones or bad ones. This particular camera is one of the best ones I own. Today’s comparable version would probably be their Core DS No Glow trail camera. My other favorite for image and video quality is the Bushnell Cellucore 20 Low Glow Cellular trail camera. With this, we’ll transition into the latest and, arguably most significant evolution in trail cam technology.

Ever inventive, manufacturers again rose to the challenge. Capitalizing on wireless signal technology, they quickly transitioned trail camera users to the wonderful world of wireless. When wireless cams first hit the market, they created not just an evolution, but a revolution. That development reformed the way many of us hunt. With either instant or periodic notifications through email or text messaging, WI-FI trail cam users could view the images through the help of an app, right on their mobile phone, and in real-time! That meant no more repeated trips to and from our hunting areas. No more disturbing game on the walk in and out. No more leaving human scent just for the sake of retrieving a card. Wireless cameras rapidly became another game-changer.

However, with every solution comes accompanying problems. As wireless cameras have helped many hunters become efficient, record-keeping organizations like the Pope and Young Club found the need to consider Fair Chase implications. In turn, they’ve implemented rules stipulating whether or not animals taken will be eligible for the record book, specifying if or how a wireless camera was used to gain information on the whereabouts of that animal within a certain timeframe before it was taken.

While I have more versatile wireless cameras, one that I really like today is a Spypoint LINK-MICRO-LTE. It’s a simple, photo-mode-only camera with multi-shot capabilities, that pairs the camera with the LTE cellular network. The camera settings are all managed in the app, where the full complement of advanced scouting tools (like enhanced AI species filters, mapping, and weather integration) can also be found. It’s a 10-megapixel camera, with an ultra-fast 0.5-second trigger speed, and an 80-foot detection and flash range.

Even still, my Bushnell Cellucore 20 trail cams are hands-down my first choice for monitoring wildlife movement, and here’s why.

At a very manageable price point of under $130 per unit, they are compact, super easy to use, and the image and video quality are tough to beat. Powered by 12 AA batteries (Energizer lithium recommended), Bushnell accommodates wireless connection through either ATT (A20) or Verizon (V2). Again, using an app on the user’s phone, settings are easily changed on any portable device. While many trail camera companies require commitment, Bushnell doesn’t require any wireless contract, and users can start or stop service at any time. The photo image quality is 20 megapixels, and the video is in HD. While this is my first year using them, the marketing material says I should expect at least six months of battery life.

Specific makes and models aside, for the time being at least, there is a potential ongoing cost that accompanies running wireless trail cams. Most offer a complimentary free wireless service bundle, but that usually only gets the user a small number (e.g., 100 images or so). With any kind of wildlife movement, it doesn’t take long to capture that many pictures. So, a monthly plan makes sense. As a rule, users can expect an average cost of between $7 to $15 each month for a data plan.

Today’s consumer trail cams are compact and efficient. Running on mostly AA batteries, alkaline works, but lithium outperforms. In fact, some of these cams have become so efficient that extended battery life is an expectation. With several of my cameras, especially the Bushnells, I returned a year later to find they are still working. That includes running those cams throughout Alberta’s frigid winter months. Most will run on SD cards up to 32 GB in size. So, unless you’re capturing video or have your camera set in hybrid mode (photo and video), it takes a while to fill these cards.

Then, there are solar-powered cameras. Another complete game-changer, solar-powered units, allow us to run our cameras almost indefinitely. Some cameras, like the Spypoint Link-S Dark have an onboard solar charging system. Essentially, this is a hybrid camera that runs off battery power when cloudy, or when nighttime power is required. When direct sunlight is present, it recharges through the solar panel and draws from that source when available. Other cameras will accommodate to an external solar panel.

With each passing year, however, game management authorities and private landowners alike highlight concerns related to the prolific use of trail cams. In response, an increasing number of states are either prohibiting their use or beginning to discuss the need for trail camera regulations.

I’ve also noticed an increasing percentage of landowners who are either disallowing trail cams on their property or insisting that they’re only used for a limited amount of time during hunting seasons, then removed when the seasons close. In turn, it’s up to hunters to employ trail cameras responsibly to offset these concerns and to ensure compliance with regulations.

Unsure if trail cams are for you? Read about the pros and cons of using one here!