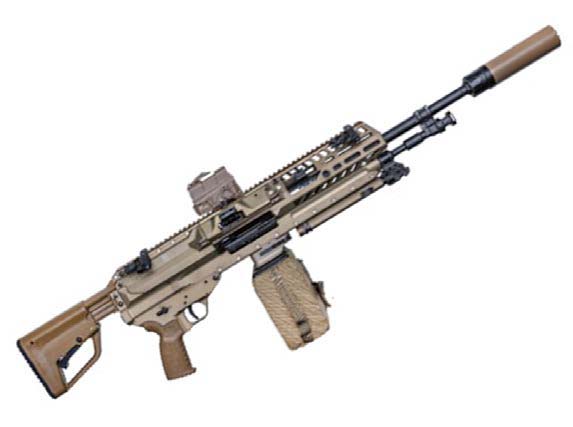 SIG SAUER is honored to be awarded the Next Generation Squad Weapons System (NGSW) Contract by the U.S. Army after a rigorous 27-month testing and evaluation process.

The SIG-LMG lightweight belt-fed machine gun and SIG MCX-SPEAR Rifle are purpose-built to harness the energy of the SIG FURY 6.8 Common Cartridge Ammunition enabling greater range and increased lethal- ity while reducing the soldier’s load on the battlefield. Both the SIG-LMG and MCX-SPEAR deliver significant weapon and technology advancements to the soldier and provide a solution for battlefield overmatch in compari- son to the current M249 and M4/M4A1.

The U.S. Army’s procurement of the NGSW System marks the beginning of an era where combat weapons are coupled with a suppressor as standard issue equipment. The SIG SLX Suppressors are designed to reduce harmful gas backflow,   sound   signature and flash. SIG SLX Suppressors feature a patented quick detach design for easy install and removal.

SIG SAUER is a company that is driven by innovation and we are proud to offer the advancements of the NGSW System in the SIG 277 FURY Hybrid Ammunition (the commercial variant of the SIG 6.8×51 FURY Ammunition round), SIG MCX-SPEAR Rifle, and the SIG SLX Series of Suppressors available to the consumer