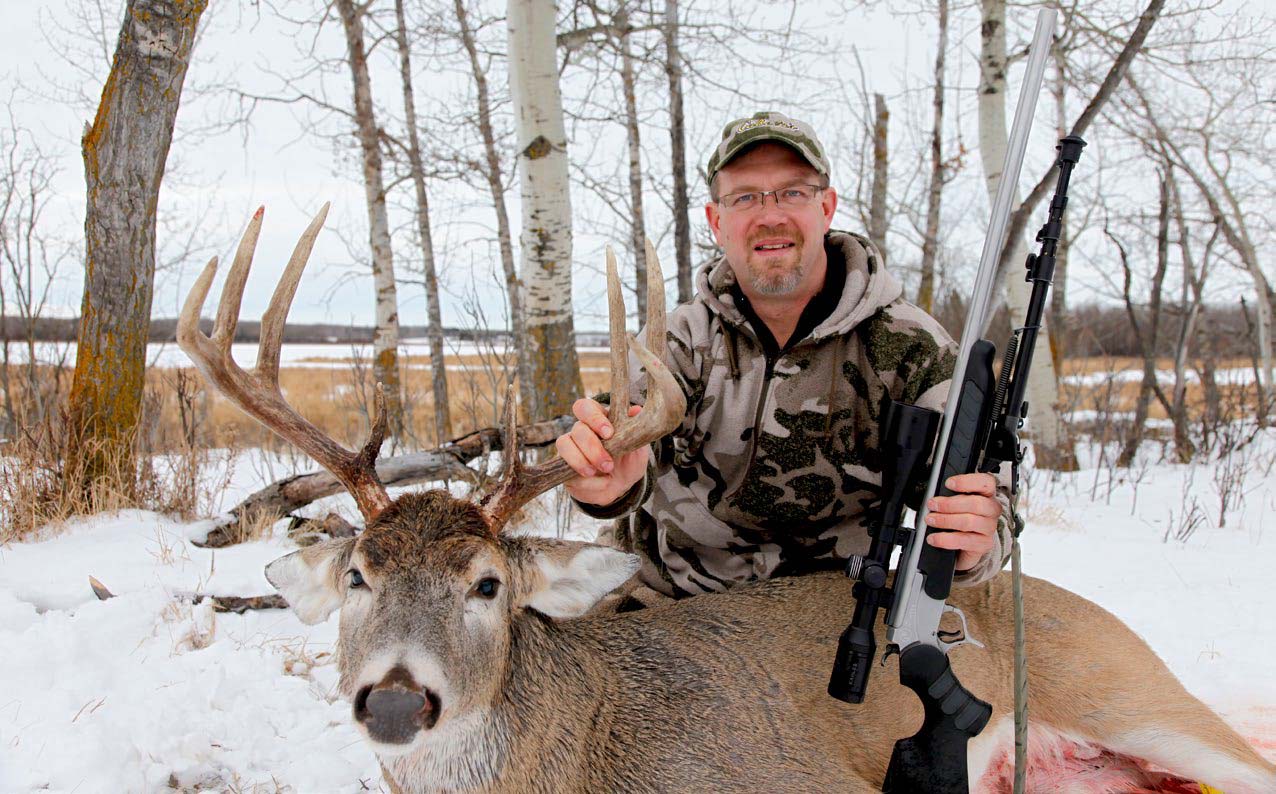 If you have been fortunate enough to witness the rutting chase of whitetailed deer, you can appreciate the incredible strength and stamina that these grand animals posses. A whitetail buck has his work cut out when it comes to getting the opportunity to breed. When a doe comes into estrus and locates a dominant buck, she’ll take her suitor on a long-winded chase before breeding occurs. The rut chase usually occurs on the edge of an open area, and the doe will lead the buck on a long chase before stopping and allowing the buck to do his job. These chases can last for long periods and cover lots of distance.

Knowledge about whitetail rutting behavior can help anyone hone their hunting techniques during the rut. One of my favorite hunting areas is along a large wetland. The transition zone between the wetland’s emergent vegetation and the aspen forest provides the perfect corridor for these rut chases to occur. The strip of open grassland is ideal for deer to travel undetected. The lakeshore usually isn’t a hot spot for deer hunting, but during the rut, the stretch of shoreline becomes an active avenue for hot does and big bucks. I watch that lakeshore a lot and have seen many chases occur along the stretch. Deer will pop out of the bush at one end, and the bucks will chase the does clear around to the far side. They are usually fighting exhaustion and have often run past me with their tongues hanging from their mouths. 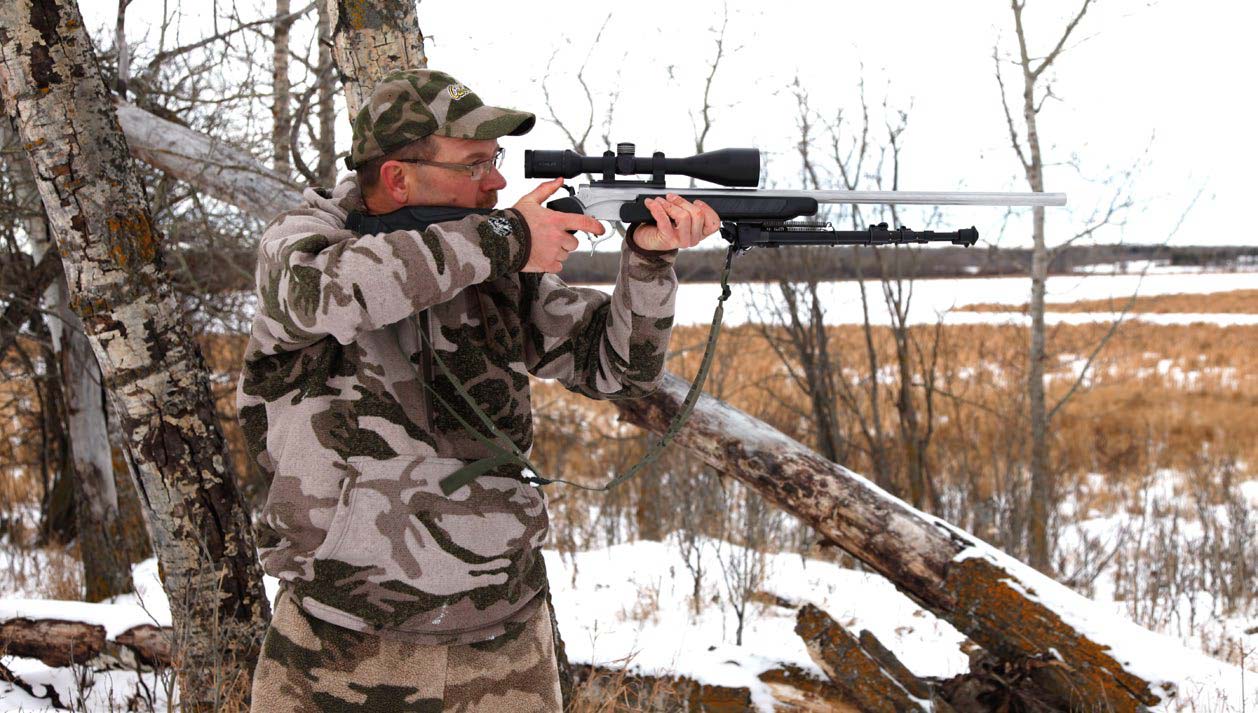 One of my favorite memories of the area was when I heard noise behind me and slowly turned my head in time to see a large doe sprinting for the fenceline. She cleared the top strand with ease and sailed through the air before coming back in contact with the ground. The mature doe was just 13 meters from where I was sitting, and it got my heart racing with anticipation. I knew there would be a buck hot on her trail and I steadied my rifle on my shoulder while trying to calculate my best shooting lane. Within seconds there were pounding hooves at the fence, and a big mature buck cleared the top wire exactly where the doe had flown through the air. The buck had a tall set of antlers, and as I found the huge-bodied deer in my scope, I quickly determined that the buck only sported four points on each side. I made a quick decision to pass on the deer and watched the mature buck quickly disappear from range.

Watching the buck vanish into the aspens at the far end of the lake, I knew I was in the right spot. The buck may not have been the one I was waiting for that afternoon, but having a hot doe run through my select hunting area was a calling card for all bucks in the region. My senses stayed on high alert as I knew from experience that another buck could soon be on the trail and use the same path as the other deer. I have seen as many as 14 bucks in that spot in a single sitting and never underestimate its value. 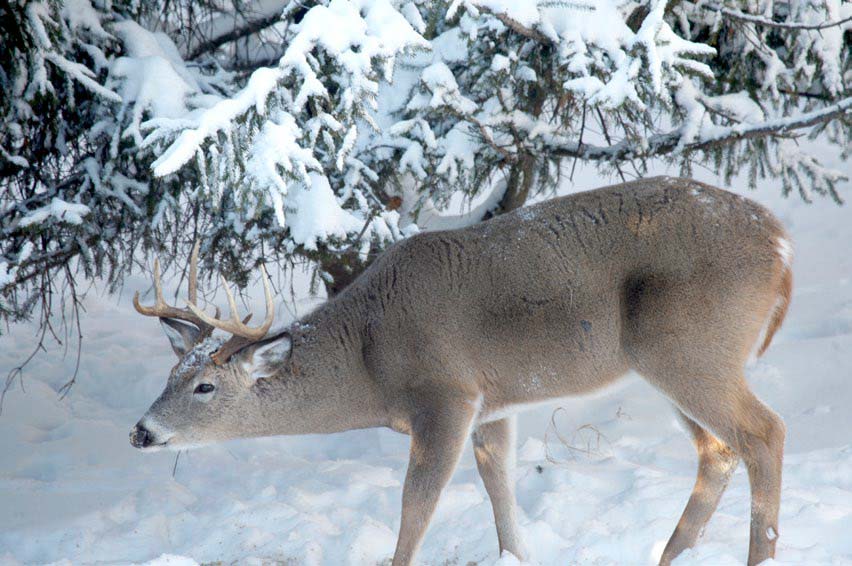 In western Canada, the whitetail rut usually starts in early November. The peak is usually around the second and third week of the month but can run as late as early December. Not all the does come into estrus at once, and breeding occurs over a lengthy period. The peak of the rut is when there is a significant number of does coming into estrus at once, creating a whirlwind of excitement. Bucks are on the move, and one never knows where or when a mature antlered buck may get caught in the open. If you can’t find a rut run, just being out during prime rut will often tip things in your favor. Rut runs aren’t that hard to locate and are often along wetlands or lakes, but I have also found them along creeks and in pastures with small bluffs. The common denominator seems to be a stretch of open country with quick access to good escape cover. Bucks are very protective of hot does, and having escape cover to push them to may help reduce competition from other bucks. It will be an area adjacent to where does and fawns actively feed and or bed. There is often a scrape line along the rutting corridor, and if you watch for big tracks going in both directions it will help you narrow down a location to set up and watch.

Always try to stay downwind of the most heavily used trails. Deer have a highly developed sense of smell. Deer have glands on their hind legs, and when urine is directed over them they provide olfactory messages to each other about the bearer’s sex and age. Also, glands located between the hooves enable does and fawns to track each other when separated. Anyone that has hunted the rut knows that a buck can trail a hot doe that has run full speed along a trail. A deer’s sense of smell is certainly specialized. The scrapes that you find during the rut are calling cards for bucks and does that leave their scent behind. It is amazing how a deer can pick up a hot trail from a scrape and know exactly what direction to head. Don’t ever underestimate a deer’s sense of smell and keep the wind in your advantage. 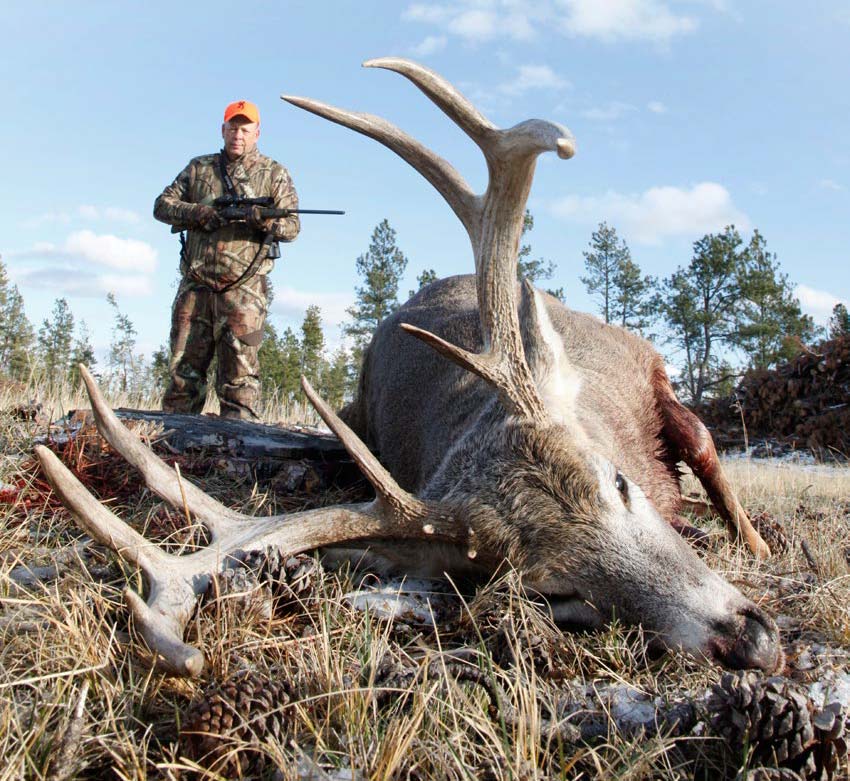 Set up a blind or treestand and be prepared to watch an area all day. Bucks will travel from first light right through the day. It is impossible to guess when they will be on the move so putting in a complete day is important to finally catch that big guy flat-footed with his nose to the ground.

Staying concealed will always help you remain undetected by whitetails. Mature bucks don’t miss a thing, and if they see you move or even lift your rifle chances are you’ll have reduced your chances for success.

Deer see things differently than humans, and after reading a study done to positively determine what a deer deciphers through those big brown eyes I had to find out more. I was fortunate to take in a scientific presentation on how deer see, and it certainly opened my eyes.

Eyes are made up of rods and cones that act as photoreceptors to absorb light and colour. To avoid a long science lecture, there are two main pieces of information from the study that all hunters should note. First, more than 90 percent of the receptors in a deer’s eye are rods, giving it excellent night vision. Second, colour vision is based on the number of different cone types in any given eye. A deer has two different cones giving it dichromatic (two-colour) vision versus humans, which have three. What this means is that deer see natural colours in their environment very well. Brown, yellow, and green make up the majority of their colour sight. However, they do see brighter colours than humans can, within the ultraviolet spectrum. In short, typical camo patterns will blend well with the areas you hunt, as long as they are not shades darker or lighter than everything else. We see blaze orange as a bright colour, but deer distinguish it as a yellow-green. Laundry brighteners and phosphates in detergents can make any of your clothes glow like a Roman candle, so try to avoid them. Never think that the rest of the world sees things the way we do.

It is prime time for deer hunting, and if you ever wanted to take a nice buck or pack some venison into the freezer, simply get out in the deer woods. It may seem like there is lots to learn, but the best way to figure things out is by personal experience. The more time you spend in deer country, the more you will understand their behaviour and adapt to outwit their senses.