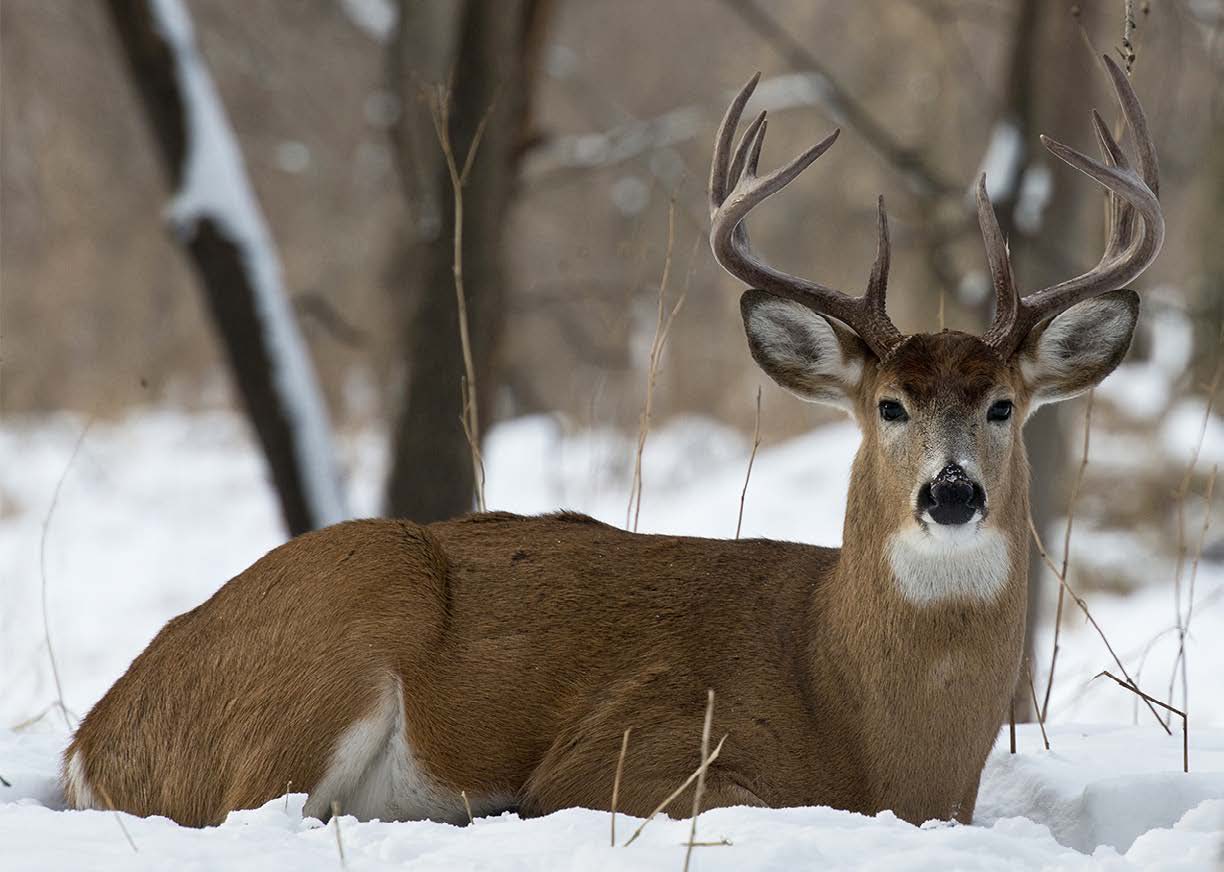 Whitetail deer may be the most studied game species in North America. While there are many fascinating aspects of our favorite game animal worth studying, the end goal is the same: to up our chances of harvesting a buck come deer season. Below is some helpful information geared toward helping you boost your whitetail hunting skills this coming season.

Two telltale signs that bucks are present pre-rut and during the rut are rubs and scrapes. Most of us are familiar with these signposts of deer habitation in our hunting areas, but do you know the best ways to approach hunting them?

A study done in Michigan showed that bucks blaze and use the same rubs that deer from previous seasons made years ago. Use this fact to your advantage by locating groups of brown, rubbed trees that bucks have used in previous seasons. Hang a treestand in cover nearby. New bucks will use these old rubs leading up to and through the rut.

After examining thousands of trail cam pictures shot on a property that experienced hunting pressure, a study conducted by the University of Georgia Deer Lab discovered that a vast majority of bucks checked scrapes between 2:00 and 3:00 a.m. This suggests that hunting directly over scrapes may not be as effective as one would think, and it’s worth setting up near a trail or the edge of heavy cover several hundred yards off the freshest scrape. This way, you may be able to get the jump on a buck moving to and from the scrapes at dawn or dusk.

As important as it is to know where deer are located during hunt season, it’s doubly important to know their behaviors and environmental concerns that can affect the hunt. That’s why it is important to pay attention to deer behavior pre- and post-season.

When spring hits, deer are feeding on leafy greens and spring vegetation. In the search for nutrient-rich foods, Whitetail increase their home ranges and does begin to give birth to their fawns. A good hunter knows how important it is to keep a close eye on herds occupying their hunting areas. These tiny fawns are a strong indicator of the health of the deer populations. In fruitful years, many does will give birth to twins. In lean years where predation is heavy and food is scarce, does will often only give birth to a single fawn.

It’s always in your interest to continue keeping a close eye on deer movements and population throughout the late summer and into early autumn as the whitetail hunting season nears and while you may have an intimate understanding of the herds on their land. Whitetails are still wild, so hunting can still be a challenge, and a trophy deer is always an accomplishment.

During the winter, post-rut deer start looking for two things: food security and shelter. Canadian winters are cold and in some years, they are so extremely cold that survival becomes a major concern for deer.

While hunting season is closed, it is important to identify feeding locations and good shelter. This gives you a strong idea of how deer populations will be affected in the spring. Are the does able to find enough food for themselves and their fawns? Are the bucks able to find enough food supply to replenish energy spent during the rut to fatten them up for January and February? Those are the truly lean months, when temperatures can reach -300C (-220F) or below, and snow depth can measure in feet instead of inches. When looking at shelter you’ll see that thick brush provides cover from predators while dry sloughs and heavy canopied old growth provide shelter from wind and snow.

Predation is a major concern during the winter months as a high wolf or coyote population will negatively impact deer numbers. Wolf or coyote will pick off does and fawns as well as bucks who may be weakened from little forage in the dead heart of winter.

You’ve done the work and you know where deer are hanging out in your hunting area. Now, you’ve just got to stay on them through the season.

Early season hunting (the beginning of September through early October) means pre-rut. That means you can expect to see groups of three or more bucks still hanging around together, feeding near dusk and exhibiting minimal territorial behavior. That said, leaving the rattle bag at home would be a mistake. As the season progresses and the velvet starts to come off, sparring picks up between bucks as they jostle for top-dog position.

While in the pre-rut period, scent is just as important as during the rut. Whitetails have almost superhuman- like noses. While most does aren’t ready to breed, there are still many that have gone into heat early. Therefore, it’s a good plan to fire up an estrous scent stick or two, maybe mixed with a honeysuckle stick to pique a buck’s interest. This is super effective through October as the rut moves closer and closer. It’s also when bucks grow more intolerant of each other while their minds turn to the pretty young does running through their territory.

Mid-season through the rut means muzzleloader season and then rifle season in most game hunting zones. In many locations, the rut typically starts at the beginning of November. It is usually at its peak in the second and third week of November.

Hunting the rut in the Prairies often means cold weather, so prepare by investing in heavy winter- weight camo and the best cold-weather boots you can afford. Expect to spend the entire day outside, so dress accordingly. You’ll end up with great memories of beautiful scenery and massive bucks instead of frozen toes and uncontrollable shivering.

During the rut, bucks abandon their suspicious and careful natures and chase does through the night. Setting up near bedding grounds and feeding spots is the strategy most outfitters run with. Because bucks are at their most territorial, rattling and grunt tubes are super- effective during this time. Most hunters will rattle for up to 30 seconds, then stop for minutes. Rattle long and rattle often. Get on the rattle bag and get aggressive for as long as you can sustain. Break for five minutes, hit the grunt tube, then rattle again. A knock-‘em-down, drag-‘em-out fight will pull bucks from far and wide. Constant and consistent rattling is an especially important tactic for mature bucks that tend to hang up and won’t commit. It’s just one trick that fills tags time and time again.

No matter the season, understanding how deer view the world around them will help get you closer and set up for that perfect shot.

Scientists have spent years studying how deer see the world. Like our own vision, deer see through rods and cones. Unlike humans, however, deer only have two kinds of cones: blue and green/yellow. Humans have three: red, green and blue. While deer can see very well in low-light conditions (think dawn or dusk, when most of us are hunting) their color vision is not nearly as well-pronounced as ours. The consensus from scientists is that deer see blaze orange as a gray shade, although their blue cones allow them to see blue hues far more distinctly. Think about that the next time you’re headed out hunting. You are far more likely to be busted by a deer if you’re wearing a camo jacket and blue jeans than you are when wearing all blaze.

Even more interesting than the ability to differentiate color is that deer have a poor ability to pick out details. Another University of Georgia study showed that, compared to a human with 20/20 vision, deer have closer to 20/100 vision. What that means for hunters is that if you stand 20 feet from a deer completely motionless, the deer will be able to get a detailed view of you similar to what a human would see at 100 feet. Because of this, if you’re wearing camo (without blue jeans!), regardless of the pattern, the camo will be successful in breaking up your outline enough so that you all but disappear to the deer’s view.

Whitetail hunting is always an adventure. It’s challenging and exciting, and while deer populations climb and fall over the years, the reason why so many trophy-class bucks are taken every year boils down to one thing: the hunt itself. Expect to hunt from dark ‘til dark. The key to Monster Whitetails is to hunt hard, hunt long, and hunt frequently.

From early season archery to late season rifle, hunting Whitetails is more than a hobby, it’s a way of life. The result of a successful hunt can be seen, heard, and tasted at countless deer camps through all the deer steaks served along with the laughs and tales of adventure told. Hopefully, these tips will make your season a success!

Noel Linsey is a writer, photographer and videographer based out of Winnipeg, MB Canada. Noel has dedicated his life as well as much of his career to pursuing the great outdoors lifestyle and can be found hunting, fishing, trapping, or canoeing (depending on the season) throughout Manitoba. When not in the woods or on the water Noel can be found running Canada’s highways and trails on his motorcycle. Noel loves to write about all things outdoors, with a particular passion for fly fishing, back country travel and his beloved canoe. When not writing about the outdoors, Noel also loves to write about motorcycles and motorcycle adventure.

View all posts by Noel Linsey