How to Use Rubs and Scrapes to Your Advantage 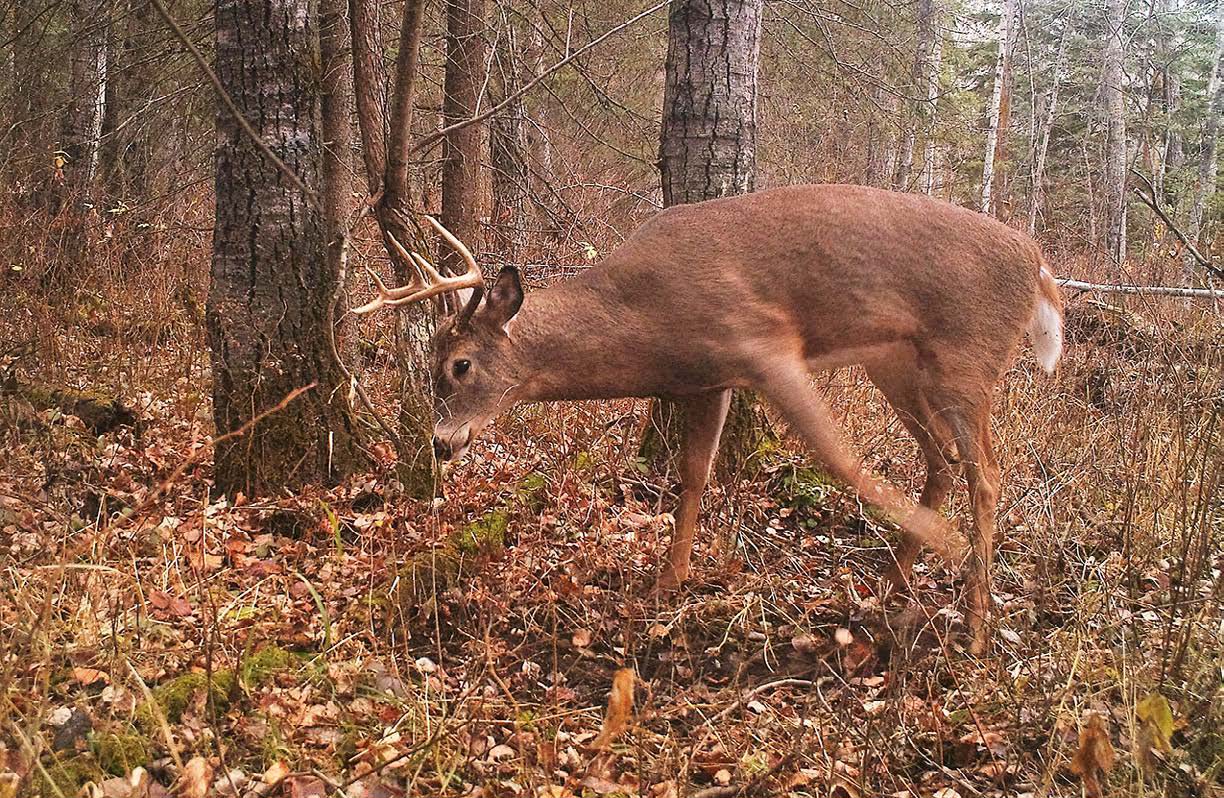 He was clearly on a mission. The three-year-old buck broke from cover and beelined for the scrape a stone’s throw from my stand. The mother of all scrapes, it was visited regularly by what appeared to be every deer in the area. Measuring 45 inches in diameter, the bucks had dished it deep into the forest floor. Standing in it, the young buck sniffed, licked, and rubbed his orbital glands on the overhanging branch, then pawed at the ground and urinated.

Twenty minutes later, a doe with two older fawns visited the scrape. Following a similar routine, the doe sniffed the licking branch and scrape and urinated in it as well.

Fast forward a week, and my target buck—a deer I called “Myron”—showed up and worked the scrape while I was on stand. Unfortunately, the shot angle was wrong, so I let him go on his way. One day later, after an otherwise-uneventful morning, I committed the cardinal sin by climbing down midday to go and pull a couple of cards from nearby cameras.

As luck would have it, my buck visited the primary scrape during the 90 minutes I was gone. Caught on camera, his behavior was classic. He spent several minutes working the ground and probing the licking branch. Mentally chastising myself, I vowed to glue my carcass to that stand for all-day sits the rest of the season.

Then, as luck would have it again—the very next day as the second estrus kicked into gear, and with only a few minutes left in the day—a doe emerged. My target buck followed close behind. Stepping into range at 18 yards, I sent my FMJ tipped with a Striker V2 on its way. After a brief run, he collapsed 25 yards from the scrape!

Most deer hunters know about rubs and scrapes, but many don’t really understand what they are or how deer use them to communicate with each other. More critically, most hunters may not really know how to use them to advantage. Whether you’re a gun hunter or a bow hunter, understanding rubs and scrapes can get you a lot closer to filling your freezer. Here’s how.

Whitetail bucks begin rubbing their antlers on trees, establishing territorial markings as early as the begin- ning of September as they shed their velvet. This seasonal transition to hard antlers denotes the very earliest stages of the pre-rut. It’s a time when bucks start polish- ing their antlers, strengthening their neck muscles and marking their territories.

Rubs are commonly seen on aspen, birch, spruce and pine trees. They can also be seen on a variety of other trees and shrubs, too. Early on, bucks create these telltale signs by scarring the bark throughout their home range. Aside from these practical reasons, bucks use rubs to communicate with their peers in the area.

A common misconception is that a small rub is made by a small buck. While somewhat true, small bucks will indeed work only small trees. Big bucks will often rub on larger trees as well as smaller ones. Interpreting rubs can be fairly straightforward. As a rule, I take note of any rubs I see in the areas I hunt, but I don’t get excited until I see something extraordinary. Noteworthy, in my opinion, is a tree rub that is larger than four inches in diameter. Locate fresh rubs greater than eight inches in diameter and you may well be on the trail of a book buck.

In the end, however, all that a rub tells us is that a buck is in the area. Bucks will indeed work and rework a rub line. Savvy hunters learn that bucks will often rub the same, or nearby trees, year after year. Strategically placing a trail camera on trees known to be rubbed by the same buck year after year can be an effective way to capture images of that deer. To do so requires that we place those cams early in the season, even by early October.

Fresh snow can be a great help in showing how recently as rub is worked over. Fresh tracks around a rubbed tree or shrub and shavings lying on top of any fresh snow can often reveal that a buck was recently in that location. In the end, though, scrapes provide much more information.

Scrapes are another, and arguably the most significant occurrence, used by Whitetail deer. In agricultural areas, the first meager scrapes of the year begin to show up as early as mid-September along field edges and tree lines. In bigger, heavily wooded areas, scrapes eventually show up on ridgelines and can often be found in thicker coniferous stands. Earliest scrapes are territorial markers. They’re normally sparse and often first appear as smaller scratches in the dirt. Over time, they serve as signposts and communication tools. Although usually less obvious, bucks and does both visit these regularly, paw the ground to expose fresh earth, stand in scrapes and then urinate in them.

Scrapes are almost always made under some type of overhanging branches. These are referred to as licking branches. That’s because bucks lick them and rub their orbital glands on them to deposit scent. Urine deposited in the scrapes and glandular secretions contain pheromones that indicate breeding readiness. Bucks rubbing the licking branches with orbital glands leave unique scent. Other deer visiting these sites detect the hormonally charged scents to identify which deer were there and whether they were bucks or does. This behavior persists and gradually builds throughout the pre-rut in September and October. As the rut proper approaches, scrapes are visited more frequently by both bucks and does. In my view, scrapes are the number one most important sign that deer hunters should watch.

Throughout September and the early part of October, bucks will lay down boundary scrapes to mark their home range. Bigger bucks in particular will cover more extensive areas, travel, and essentially inventory doe groups.

As an early-season bow hunter, I make note of these. But it’s only when the late October pre-rut heats up in preparation for the fast-approaching breeding season that I begin focusing my attention on these critical signposts.

Primary Scrapes Are Everything

At risk of sounding melodramatic, primary scrapes are the be-all and end-all for many serious big buck hunters. Among all of the boundary or secondary scrapes made by resident bucks in September and much of October, most bucks will narrow their focus to a select number of scrapes they consider most accessible to resident does by the end of October. These become primary scrapes or “community” scrapes. (At least, this is the situation throughout most of the northern U.S. and Canada.) In Alberta, where I do much of my own hunting and outfitting, I pay the most attention each and every year to the date of October 26. Like clockwork, I can walk the properties I hunt and quickly locate these primary scrapes that day.

This is when the scrapes often look bigger, deeper, and fresher than others in the area do. As bucks work their scrape lines, they continue to open secondary scrapes to monitor does for breeding readiness. As soon as the first estrus occurs (between November 10 and 15), the bucks invariably step up their monitoring efforts to focus on those primary scrapes. (Then, they will work other scrapes, but they’ll pay more attention to those primary scrapes.) Deer biologists often suggest that bucks will visit those primary scrapes at least once (often more frequently) every 24 hours during the estrus. What does this mean for the Whitetail hunter? As both a bowhunter and as a gun hunter, I’ve learned to set up stands and ground blinds in close proximity to these primary scrapes. Don’t be afraid to drop some doe estrus scent in these primary scrapes each time you hunt, but always use discretion. (In other words, a little goes a long way.)

In addition, be aware that deer expect other deer to visit those scrapes. That’s why rattling and calling can be great strategies for attracting curious bucks. I’ve had bucks come racing to the sound of rattling antlers and grunt calls. They’ve stood there with all four hooves squarely planted in the middle of the scrape, swinging their heads and antlers, displaying dominance and a claim to the scrape.

Spend any amount of time in the deer woods and you quickly learn that after the first estrus, boundary scrapes are more or less abandoned. It’s those primary scrapes that are serviced most at that time. During lockdown (generally from about November 16 to 21 in our area, even the primary scrapes are served less and less.

However, as the second estrus hits (usually between November 22 and 25) those primary scrapes are re-opened and bucks and does continue to use them to communicate with one another. I’ve even seen them reopened (albeit less pronouncedly) during a third estrus as well. Then, almost overnight, as the post-rut hits with a vengeance, deer abandon scrapes altogether.

Aside from focusing on natural primary scrapes, the best advice I can offer is to make and hunt over a mock scrape strategically placed along a heavily traveled natural scrape line.

Primary scrapes are often made in spots where there are no decent trees for a stand, or the best tree is just out of range. This is where a mock scrape can be a great alternative. I’ve taken many bucks over mock scrapes. You can, too.

By crafting a mock scrape that competes with the natural scrape, we “call out” the resident bucks and lay down a challenge. Dominant bucks especially are often eager to accept the challenge. They will commonly take over the mock scrape, servicing it themselves. By making the mock scrape relatively close to or even right beside a natural scrape (especially where you have a good shooting lane from your blind or stand) you can elevate your chances of creating a shot opportunity.

Care should be taken when making a mock scrape. If you can, wear scent-free gloves and use a stick to scrape back the ground at least 24 to 36 inches in diameter. If you’re hunting an especially bigger and older buck, don’t be afraid to make it even a bit bigger. Kick back the leaves and earth in one direction to make it appear as natural as possible. Spray scent in the scrape. I’ve enjoyed consistent success with Tink’s Scrape Starter and have taken many bucks with a bow and a gun using this combination.

Once the mock scrape is taken over by resident bucks, consider anointing it with dominant-buck scent. During the late pre-rut and during the estrus cycles, treat your mock scrape with doe-in-estrus scent. Remember, your goal is to keep that fresh scent there and draw bucks in to check it regularly. If you’ve never tried this strategy, it’s time you did. You won’t be disappointed.