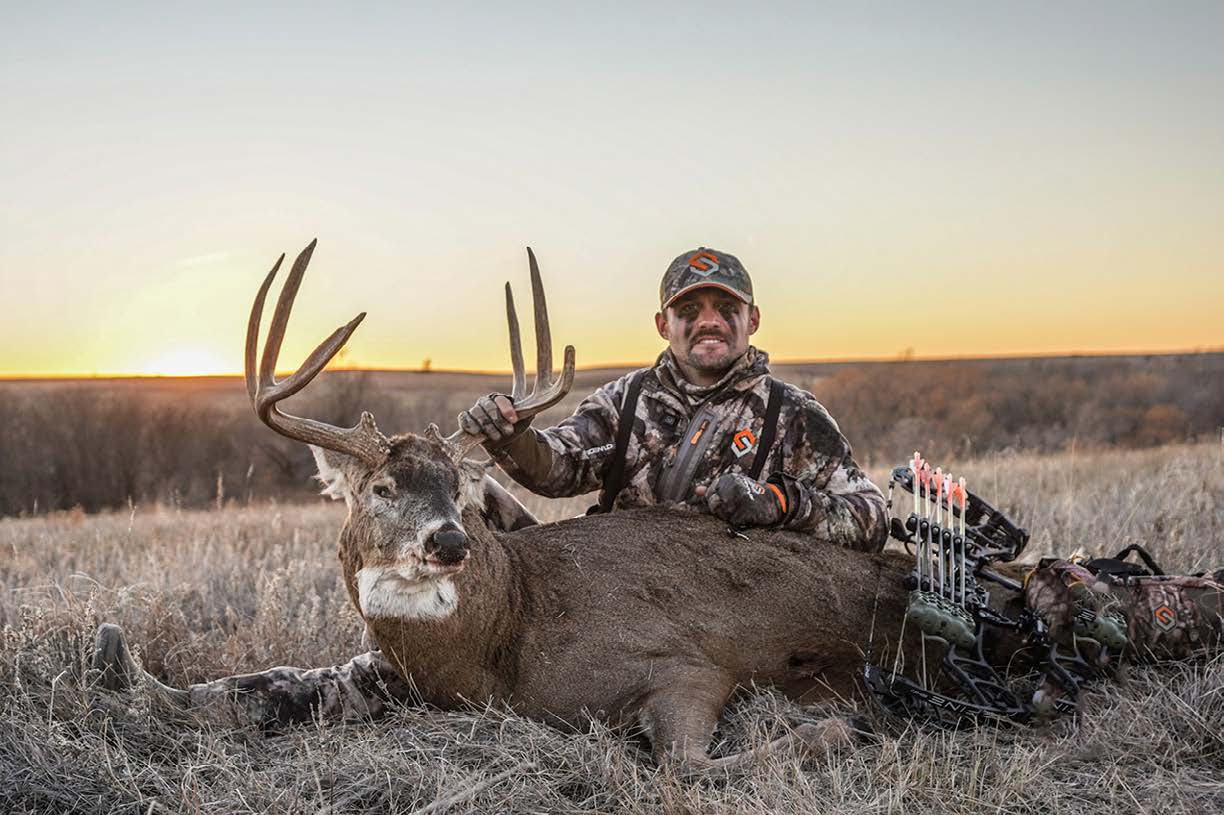 Several years ago, I landed my first job in the hunting industry by becoming a member of a field promotions team for a leading hunting manufacturer. One of my duties was to promote different products while doing in-store promotional events at several major hunting retailer sites.

While doing the in-store events, I often endorsed multiple food plot seed blends and many different minerals and attractants for Whitetail deer. Years later, I became more educated on the needs of Whitetail deer by talking to various professionals specializing in deer nutrition.

I now realize that most of the marketing done by sporting goods stores when selling deer nutritional products can be very misleading to hunters. Many seasonal stores only put products on the shelf during that specific hunting season—for example, deer minerals and food plot seed. Typically, they do not go on the shelf until late July or August.

The same goes for the many hunting promotions I attended while working at different events. Most of the events and sales were in mid-August. The problem was that many of the sales and the hype that went along with food plot seeds and mineral supplements gave hunters the impression that the timeframe when they were purchasing these products was also the timeframe when they should use them.

The common misconceptions surrounding when to use supplemental products to create healthier deer and bigger bucks have many hunters believing that mid- summer is the ideal period. Yet, I contend that this way of thinking is wrong. The most crucial time for bucks to have a boost in food and minerals to impact their antler growth is before their antlers begin to grow, or when they are still sporting the rack from the previous year.

One of the most crucial times for a Whitetail deer’s health, and when hunters need to provide an extra boost from supplemental feeding and minerals, is directly after the rut.

Matt Jennings of The Game T.V. consistently harvests mature bucks each year. Jennings agrees that the rut takes a toll on a Whitetail buck’s body. “Post-rut is all about resting and re-fueling for bucks,” says Jennings. “About the time you’re finishing your Thanksgiving leftovers and waking up from a turkey coma, deer are starting to hammer food sources and settle in for some much-needed rest,” he adds.

Many hunters wonder where all the bucks disappear after the rut. More than likely, bucks are in the thick cover, resting their bodies. “Bucks will usually find a place with ample forage and go into seclusion in some out-of-the-way, hard-to-reach areas of cover,” explains Jennings.

Bucks seem to do a disappearing act after the rut because their bodies are worn out from the intense amount of energy they have burnt over the previous month chasing and breeding does.

The massive amount of body weight, strength, and muscle mass that a buck loses is one reason why the winter months can be the most crucial time for supplemental minerals and a need for considerably more amounts of food.

Once a buck has rested, he must rebuild and replenish his health. The time it takes for a buck to replace lost nutrients will factor into the following year’s antler growth. Ph.D. nutritionist Will Griffin says that future antler growth can be boosted by providing extra food and minerals during winter. “Less stress and the correct amount of minerals and nutrients equals better antler growth for the next year,” explains Griffin. 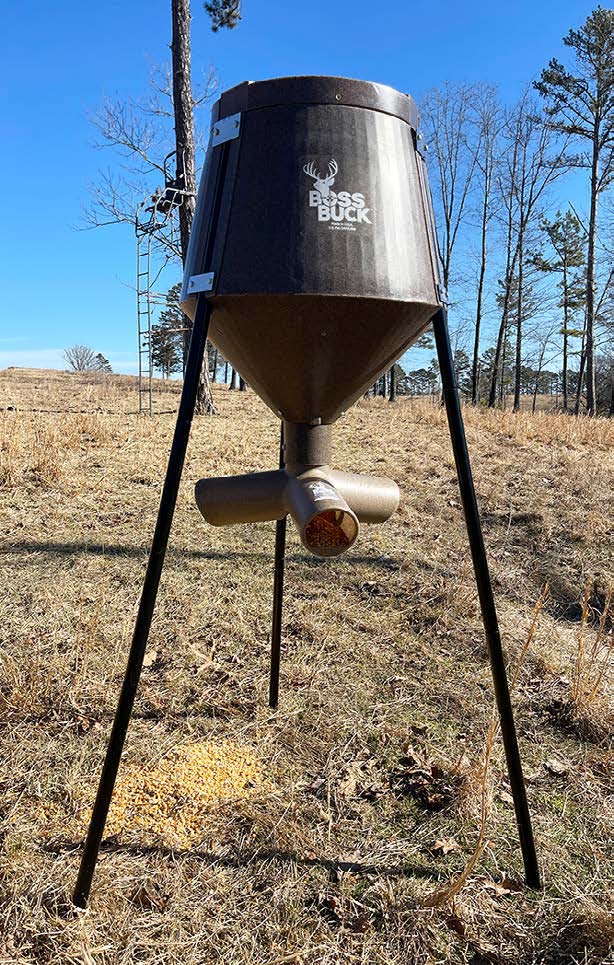 One of the first things many hunters want to do when boosting the available food for deer is to pour out a massive amount of corn. Yes, deer love the taste of corn, yet when they have an instant change in their diet (such as going from consuming grasses, acorns, and forage daily to eating a massive amount of corn) that can be harmful and even deadly.

As a ruminant, the Whitetail deer has a specific blend of microbes in the stomach. These microbes help break down their naturally high-fiber diets. When deer suddenly eat large amounts of carbohydrate-rich, low- fiber foods (such as corn), their stomachs can experience a disruption that can harm their digestive system.

In worst-case scenarios, deer have been known to experience severe diarrhea and dehydration, which can be deadly.

To ensure that deer receive a healthy boost in nutrients, it is vital to use supplemental feeds that are easier to digest. “During the wintertime, deer like to seek protein sources to help rebuild muscles and put back on body weight,” says Matt Jennings. He then added that he prefers products like Big and J’s BB2 to help in the refueling stage of the game.

Big and J’s BB2 has a high level of TDN (total digestive nutrition) and provides a higher energy value than compared to whole corn. The BB2 is more nutrient-rich, so deer receive more energy value, protein, and mineral content per bite than most other feeds. Jennings explains he uses multiple feeding sights on the properties he will be hunting, each sight having a significant amount of BB2 available.

To reap the benefits of future antler growth from replenishing lost nutrients faster, a mature buck must take in more protein-rich foods and a balance of high- carbohydrate foods.

The best way to provide winter forage is by having multiple winter food plots available. The most common winter forage is turnips, sugar beets and radishes. All three produce both nutritious leafy growth above the ground and high-carbohydrate bulbs underneath the ground that typically provide a sweet taste during the latter portion of winter and produce energy. By having a significant amount of available food, late-season food plots and supplemental feeds, such as the Big and J BB2, deer will restore their bodies to health much more quickly.

A significant amount of available food during the winter benefits future antler growth for bucks. However, to provide even more advantages for their health, it is also essential to have many minerals available.

Griffin says that depending on the size of the hunting property, hunters should have several different mineral stations available during the winter. That’s especially the case during the weeks after the rut when bucks are ready to take on a massive amount of nutrition.

Griffin suggests using minerals such as Big and J’s Headrush because they contain key minerals that bucks desperately need during the time after the rut. Headrush contains several key trace minerals, including zinc, copper, and manganese, which are essential for better antler growth in the future. By having multiple stations, bucks have more access and, in turn, will consume more of the needed minerals without the stress of searching or competing against other deer when only one or two mineral sites are available.

The word “stress” is vital when discussing better antler growth for bucks. It is well known from many hunters who are trying to manage bigger bucks on their property that stress is one of the leading factors in minimal antler growth.

During the winter, bucks have the two most significant factors of stress. Recovering from the grueling breeding season and trying to survive the bitter cold can cause immense stress. Making food, supplemental feeds and minerals readily available will help make bucks’ recovery quicker, and their determination to survive the winter will be easier, resulting in bigger bucks. 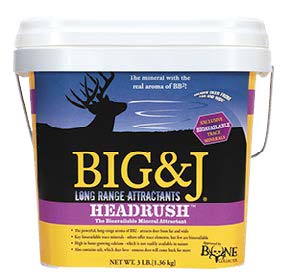 Big and J Headrush is a product that will not only aid in adding inches of bone for the following year, but the aroma and flavor will mess with a buck’s mind.

Headrush is a salt-based formula with added calcium and bioavailable trace mineral sources of zinc, manganese, copper and cobalt. We all know that deer love salt, even when it is not fortified with other ingredients.

Big and J have taken salt-based supplements to the next level by adding an aroma that deer cannot resist. Calcium (a significant component in bone and antler growth), and bioavailable trace elements aid in cellular function and overall herd health.