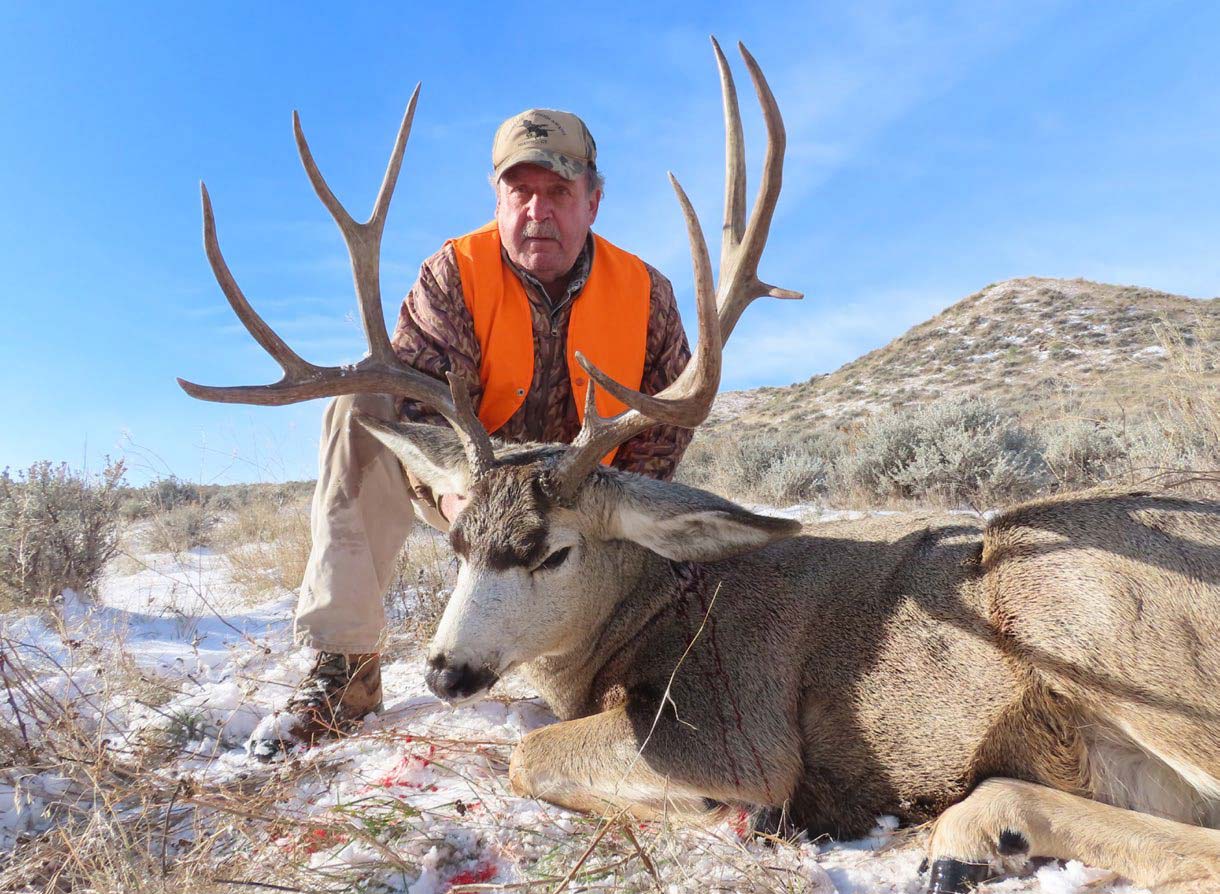 Mountains and mule deer seem synonymous, yet the Midwest and Great Plains offer excellent hunting for giant bucks without the climb. Think attitude, not altitude.

The Pine Ridge Indian Reservation spans nearly 2,000,000 acres and Neil Davies and I each had a deer tag. Shortly after noon, we met Travis Brave Bird, our Sioux guide and headed into some of the most incredible landscapes of the West. Like a teenager on his first trip to New York City, I was google-eyed at the majestic country we traversed. No shots that first afternoon, yet what an adventure!

Brave Bird picked us up well before dawn the next morning and we drove to a particularly promising section of the Oglala Sioux Reservation. The sun was just below the horizon, casting a brilliant red glow upon the dawn when Davies spotted a deer on the horizon.

Instantly, he dashed up a hill, raised his rifle and fired, so quickly that Brave Bird and I looked at each other in disbelief. “Did you see that deer,” he huffed after descending the grass covered slope. “It had a drop tine and stickers on both sides. Unfortunately, I may have shot the wrong deer.”

Davies deer was a very mature 10-point, yet not the big nontypical whitetail he’d seen on the skyline. This was a great deer and we celebrated the quick success as we drug the buck to vehicle access.

Brave Bird was a conservation officer with the Oglala Sioux tribe, so it was his job to patrol a huge section of the reservation and enforce its game laws. During these travels he often encountered mule deer and whitetails, experiences that made him a most effective guide. 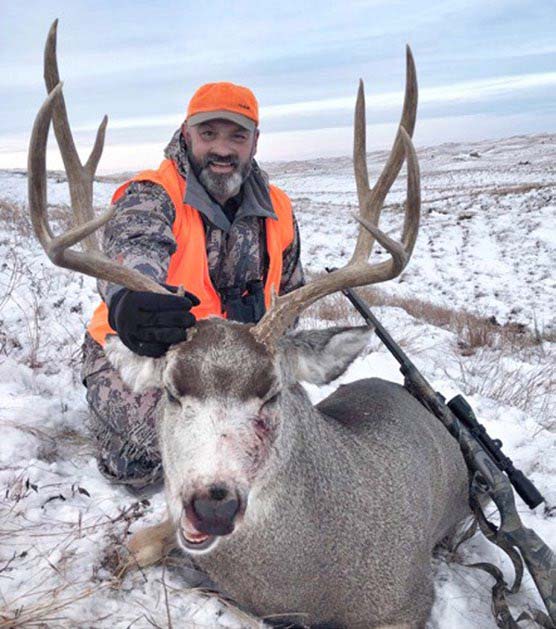 My goal was a mule deer, yet Davis’ deer showed the bonus potential of hunting in the Great Plains where hunters often get a “deer” tag which is valid for whitetails or mule deer. I wanted a mule deer but wouldn’t hesitate if we encountered a monster like Davies had seen.

The morning was still young as we drove deep into the interior, often swallowed up in the enormity of the land. Huge buttes shot up around us, covered in the pastel hues of the Badland topography.

Frequently, we’d tuck the truck into a patch of cedars, climb to the crest of a scenic overlook and glass intently for game. “There’s a buck,” whispered Davies and he glassed one section of thick cover. Homing in on the location, we could see a bedded doe and mature buck walking slowly around her. We quickly backed out, made a wide circle and crept toward the ridgetop overlooking their location.

Sure enough, the buck was still there, anchored by the estrous doe. The shot was more than 200 yards, yet with ample time to get a solid rest and the buck standing broadside, the animal went down with a single shot. It disappeared on impact, yet when the doe fled alone, our confidence soared.

Everything about this hunt was new. First time on the reservation, meeting our guide, seeing the magnificent country. Before leaving, we arranged to hunt the same area with the same guide the following year.

Since Brave Bird knew us and anticipated hunting again, he cruised promising areas of mule deer habitat as part of his weekly routine. Before long he had located a huge 4×4 buck.

When we met our guide that fall and he told us about the big buck he had located, my heart nearly stopped. I couldn’t wait to see those magnificent landscapes and experience the heart-pounding excitement of the chase.

In late afternoon, we headed toward a distance section of the reservation and Brave Bird described the buck as being tall with deep forks, but not exceptionally wide. “He’s with about 15 other deer, so we’ll have to approach carefully and make sure we have the right deer,” he said.

After parking his rig, we walked about ¼ mile and sure enough, the buck was with the larger group. The animals were crossing a fence and moving onto private land where my license wasn’t valid. “You need to shoot quickly,” whispered Brave Bird.

A silent voice deep within my soul said, “Don’t do this. You’ve waited all year for this hunt, and it will be over the first evening. Are you sure you want to end this hunt so quickly?”

These feeling only took a few seconds, yet it was long enough to see the buck jump the fence and show off it’s enormous rack against the evening sky. “You may regret this,” said Brave Bird, disappointment steeped in his voice. “He’s now fair game to anyone on the other side of that fence.”

The herd of deer we’d seen that evening often moved from private land to the reservation in the afternoon, so Brave Bird took us back to the same area I’d hunted the first year. Personally, I was thrilled just to be in such magnificent country. We probably glassed 100 square miles that morning yet didn’t see a shooter buck. None the less, hunting such amazing country was a thrill. After an early afternoon sandwich, Brave Bird suggested that we head back hoping the traveling band of deer had returned to the reservation.

Stopping atop a ridge, Brave Bird glassed a distant meadow, turned and smiled – they’re back. Recreating a similar stalk, the big buck was easy to pick out for it’s rutting behavior and huge antlers.

Cresting a small rise, I slid the Howa chambered in .300 Win Mag onto my backpack and centered the reticle on the deer’s shoulder, or tired to. The rutting beast was moving erratically, and I watched it for more than 5 minutes. Finally, it stepped into a small opening and I squeezed.

The rifle reported, yet the buck didn’t go down. Suddenly I realized that the deer was more than 300 yards, re-aimed and squeezed my steadiest of shot. The impact was instant-big buck down.

As we approached the downed monarch, I was truly amazed at the antler mass and the size of the mature animal. Although his time was finished, he had passed his genes onto numerous does in the herd leaving his legacy for generations to come.

Just as the Badlands of South Dakota formed in our geologic history, so to have the sandhills. Once sand dunes, today they sport a hefty cover of prairie grass and in the vast expanse of Nebraska nothingness, make an excellent home for mule deer.

“Our ground here is maybe 60 percent whitetail and 40 percent mule deer,” says Scott Fink of Goose Creek Outfitters. “The mule deer like it in the hills and have done well because they can cover a lot of country. I get a lot of hunters who want a whitetail until they see a mule deer,” says Fink. “Luckily, the license is good for either species.”

The sandhills have few trees and you can see for miles and miles. A typical hunt begins with a spotting scope or binoculars to search in every direction. Once game is located, hunters get closer using the choppy up and down terrain. Since mule deer may come to creek bottoms for water, Fink’s hunters also do blind hunts near food plots and cornfields. “Whitetails will live in a cornfield, but muleys mostly hang on the edges” he says.

Nebraska’s archery season begins early sept 1st and runs until the end of the year, while rifle season usually begins the second Saturday of November with the muzzleloader season lasting the whole month of December.

Fink’s Goose Creek Outfitters is a family run business operated primarily by Scott and his wife, LaCaylla, and a couple of guides. They limit 4-6 guys in camp at a time with access to 50-60,000 acres. Last season Zach Scheidegger from Alps Outdoors took a great muley with heavy mass while sitting in a blind. Anthony Barthell had an exciting spot-and-stalk hunt. He and his guide spotted a great buck a long way away and found it bedded down. www.goosecreekoutfitters.com

I once hunted the boundary of North Dakota and Montana. More exploring than hunting, I came across the strangest rocks imaginable. It was shaped like a giant boomerang and made an excellent blind. As I moved on, I glanced back and realized I was hiding behind a giant petrified tree. The fossil was at least 50 feet long and five feet in diameter.

The rolling plains of Eastern Montana offer outstanding mule deer hunting (as well as a chance to see prehistoric fossils) and the hunting can be unbelievably good in midto- late November when the rut is in full swing. During this time, most of your time will be spent glassing as you search for roaming bucks searching for does.

Mature mule deer bucks are the ghosts of the prairies during most of the year, yet suddenly “appear” in the wide-open spaces of prairie grass and sage country. Eric Albus has been my mentor in such situations, and he will easily glass 100 square miles in a day’s hunt. The trick is to spot does and carefully examine their surroundings with binoculars and spotting scopes which usually turns up a buck. Once you spot Mr. Big, the stalk is on. The trick is to not spook the does. If they stay put the buck won’t leave.

The mule deer rut is the best time to take a big deer and recent wet springs have boosted antler size. Typically, hunters look for deer with antlers that measure between 160-190- inches and Albus has had good success with deer in this range. www.MilkRiverOutfitters.com

Finally, Wyoming offers one of the most enjoyable combination hunts in the country, teaming flat-country mule deer with pronghorn antelope. I bow hunted a large ranch near Medicine Bow Wyoming and experienced this combo magic firsthand.

The ranch was up for sale and the realtor thought that a good hunting story would help sell it. Mike Disario and I headed for a series of rolling hills that overlooked a dry stream bed and located three big mule deer bucks. The deer were feeding casually, and Mike sneaked to the edge of several huge boulders. Unfortunately, the moving deer didn’t present a shot, yet passed by me at 50 yards and my arrow was on target. Two days later, I made one of the best shots of my life taking a mature pronghorn at 55 yards after stalking through short sage and a million cactus plants.

Jim Schell is a former President of the Wyoming Guide & Outfitters Association and I asked him about the current combo status. “The antelope season opens in mid-September and runs to the end of October so there are lots of combination opportunities,” Schell said. “Remember that both residents and non-residents must draw tags for all big game. Generally, public land hunts take more preference points than private land, however, 20 percent of licenses are drawn at random so it’s possible to get lucky and draw a tag.”

Schell has operated Rough Country Outfitters more than 30 years and suggests that hunters make at least a two-year plan for a combination hunt. “Apply for preference points and talk to your outfitter about the number needed to draw an area. Personally, once hunters’ book with us, I take care of that paperwork because hunters applying for the wrong area can be a problem.” www.roughcountryoutfitters.com