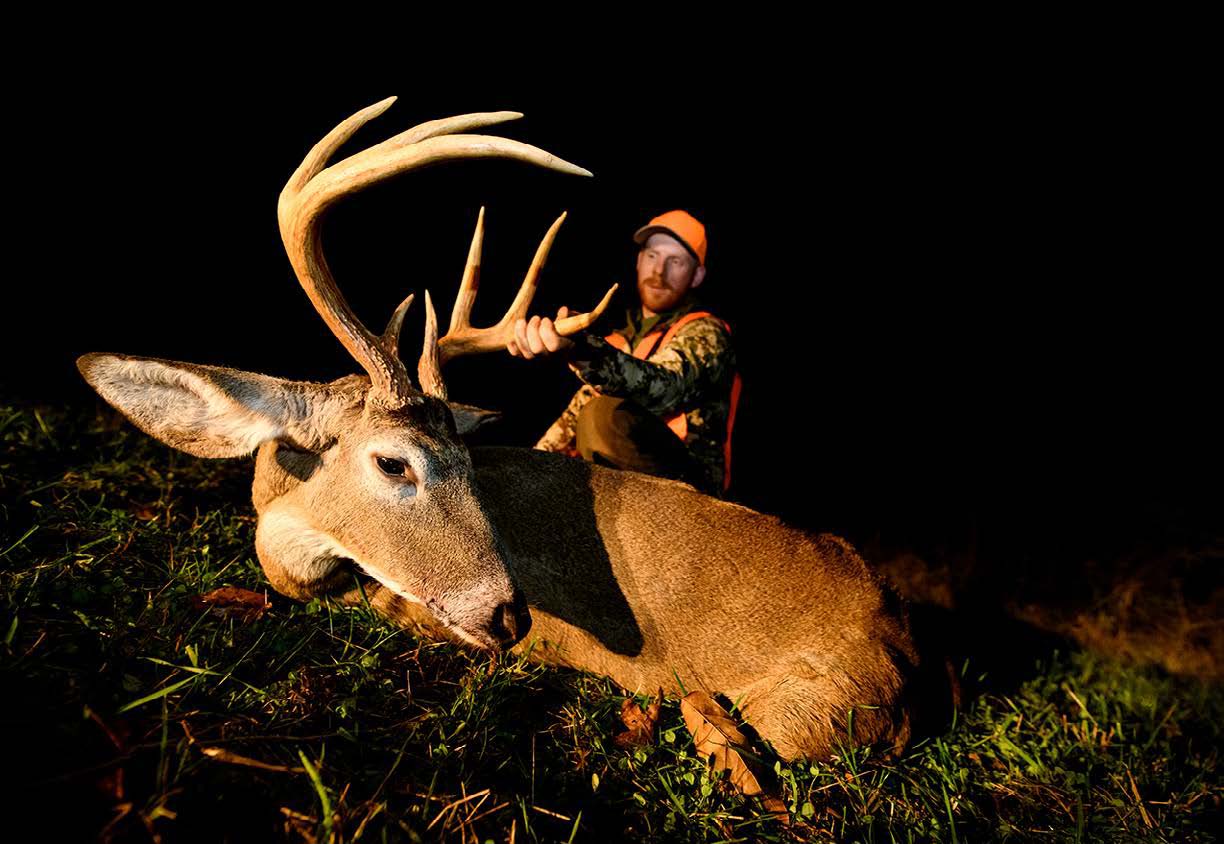 My fall 2021 hunting schedule was already lined out when the invitation to hunt Georgia White- tails hit my e-mail inbox. In fact, deer seasons were already running in most states. The invite came from Amanda Popp—previously Arcus Hunting’s marketing manager. The hunt was scheduled for early December during the post-rut.

I’ll admit that I was slightly apprehensive. However, fellow North American Deer Hunter contributor Josh Honeycutt had already opted in, which meant I’d be in good company. And, we’d be getting some first looks at new products from Arcus Hunting’s brands. I accept- ed the invite and inked “Georgia deer” onto my hunt schedule.

Prior to this hunt, I’d only hunted in Georgia once be- fore, and that was for feral hogs and turkeys. After a few days of hunting then, I pounded a hog, but the turkeys got the last laugh. Regardless, I didn’t know what to expect in terms of deer hunting. I’ve seen some big bucks come from highly managed Georgia properties, but I’ve also seen lots of pictures of small Peach State deer. While small-bodied, small-racked bucks don’t consume my thoughts, the saying goes, “Try everything once.” So I did.

Before I knew it, I’d already knocked down big bucks on two public-land hunts out west, and Georgia was next on my hunt list. I could bring my bow, rifle, or both. I elected to bring only my Mathew’s bow since my other two successful hunts had been with firearms.

I don’t love flying with hunting gear, because it’s tough to pack everything and there’s the worry about lost or damaged luggage. But, all my gear showed up. After grabbing my bow case from the luggage carousel, I turned around to the outstretched hand of friend and fel- low writer Lynn Burkhead. I’d learned only a week prior that he’d be attending the hunt as well.

After shaking hands, we got our bearings and walked toward the airport exit where Amanda was waiting for us in a rental car. We fit our luggage into the car, then conversed about life, business and hunting as Amanda chauffeured us to the hunting lodge. It was nestled on the property we’d be hunting, which is just less than two hours from the airport.

We got settled in at the lodge, shook hands with prop- erty owner Scott Tanner, who was hosting us, as well as Brian Johnston, who manages the hunting property with Scott. We enjoyed a big southern meal of fried quail and biscuits. Josh drove to the hunt. He was held up in traffic and didn’t arrive until later on.

On Josh’s arrival, we discussed hunting plans with Scott and Brian. We were aware prior to the hunt that there were opportunities to hunt fair-chase deer as well as high-fenced deer. Lynn, Josh, and I all conceded that the high-fence angle wasn’t for us. That decision weeded out a bunch of potential spots. Since I was bowhunting, Brian and I settled on a ladder stand for me to hunt from the following morning, and Lynn and Josh settled on spots, too.

On that first morning, temperatures were chilly for Georgia. However, deer movement was minimal. Other than a deer snorting back in the timber, the only thing moving around were birds and squirrels. I grunted just a few times, a ploy that Brian and I agreed could work since the rut was just on its way out. My calls went unan- swered.

The following days were very slow and temperatures were warm, even for Georgia. I saw only a one-horned spike and a doe from a different ladder stand one morn- ing. Lynn missed a doe, and Josh was seeing does and a little basket-racked buck.

During the days, we bass-fished some ponds on the property. That, too, was slow. I didn’t pull in any fish, and the whole group caught maybe a few. We also spent downtime checking out new products and had a nap or two, as well.

On the second to last afternoon, I hunted a food plot at the back of the property. I’d spent most of the other hunts in stands near that plot and hadn’t seen much, but I had a feeling something might materialize on the plot itself. I hunted from a climbing stand that Scott provided. The only other stand immediately overlooking the plot was an enclosed tower stand that wouldn’t let me shoot my bow.

On the way in, I dumped out a bag of Rack One Crisp Apple-flavored Big Game Peanut Butter peanuts in bow range, then shimmied up a Georgia pine. Afternoon faded to evening, and nothing appeared. I climbed down and tip-toed out, leaving the climber on the tree to avoid excessive commotion.

Back at the lodge, Lynn, Josh, and I were fairly sure that seeing a buck nice enough to shoot was unlikely based on the first three days’ events. Morning move- ment on day four was minimal. However, we knew that a somewhat significant temperature drop was coming in, and I felt that if anyone was to get a crack at a buck, it would be on the fourth and final afternoon. Time would tell.

Around midday, Josh and I took a UTV out to grab Scott’s climbing stand that I had borrowed the evening before. When we entered the plot, I instantly realized that the peanuts I’d spilled the evening before were completely gone. “That’s interesting,” I remarked to Josh as I pointed at peanut dust. “They must have really liked those peanuts that I dumped there yesterday. I think I’m going to try hunting here again tonight.”

Still, we pulled the climbing stand and brought it back to the lodge. That’s because I wouldn’t be bowhunting.

Lo and behold, Josh had brought two rifles on the hunt, and he coaxed me into toting his Winchester .300 Win. Mag.

As I told Brian of my plan to hunt the tower blind overlooking the long, linear food plot, he said, “Oh, you’re going to hunt from the buzzard blind?” Dumbfounded, I At the base of the tall buzzard blind, I began the climb. Propping open the door, I could smell and see that buzzards had indeed spent some time in the blind; it was a little bit nasty. Nonetheless, I reasoned that with the temp drop coming, I’d see some deer.

Not long into the afternoon, a little spike buck entered the plot and beelined to the peanuts. I decided that his little belly couldn’t fit the entire bag from the evening be- fore, so felt sure I’d see another deer. With nothing better to do, I acquainted myself with Josh’s rifle, steadying the crosshairs on the young buck.

The spike eventually left the plot, and then all was still. Soon, it was the last hour of the last day. In fact, it was actually the last half-hour of my hunt when I spot- ted movement near where I’d bowhunted the evening before. I’m not used to field-judging small Georgia deer, but I instantly distinguished that he was a three-and-a- half-year-old buck. Brian and Scott had said that would be a respectable specimen for the area.

Adrenaline surged as the buck moseyed toward the peanuts. I got Josh’s rifle steadied, flipped the safety to the off position, and burned the crosshairs into the buck’s ribs behind his shoulder. I increased pressure on the trig- ger until the recoil and report startled me. When the gun came back down, the buck was kicking his last right in his tracks. The bullet smacked right through the middle of the lungs, and the .300 imposed a shock that knocked the buck off his feet, killing him almost instantly.

I hustled out to the buck, thanked the Lord for a great hunt, and admired my cool Georgia buck. Then, I hiked to the UTV and drove back to Lynn’s stand. When he asked if I’d killed a buck, I a When we gathered up the rest of the crew, everyone was genuinely thrilled for me to punch my tag on the last day. Photographer Tess Rousey captured some great images, and she also pitched in while I butchered the buck, helping hold freez- er bags as I deboned the meat for the flight home the following morning. Scott and I situated the meat into his freezer before we enjoyed one last group dinner.

When you get invited on a private-land hunt, it’s easy to assume that you’re going to take your pick of multiple different bucks and that you’re going to see deer left and right. However, this hunt was a reality check. Hunting is hunting, and there are no guarantees. But, sticking with it and hunting hard was all it took to get my last-chance Georgia buck.

I rarely hunt Whitetails over bait. It’s a prefer- ence thing. I have nothing against baiting, I just don’t like staring at a pile of corn.

However, this hunt provided the chance to test some new products, including a peanut butter at- tractant. It can be used at regular bait sites but it also can be used on a hunt-by-hunt basis. Some have dubbed this the “spill-and-kill” method.

That’s how I used peanuts as well. The first bag was destroyed overnight, and so I knew the deer would come back looking for more on the second afternoon. That’s exactly what happened, and I don’t believe I would’ve killed my Georgia buck had I not spilled the peanut product. Where legal, I believe it’s the ideal product for spill-and- kill hunting.