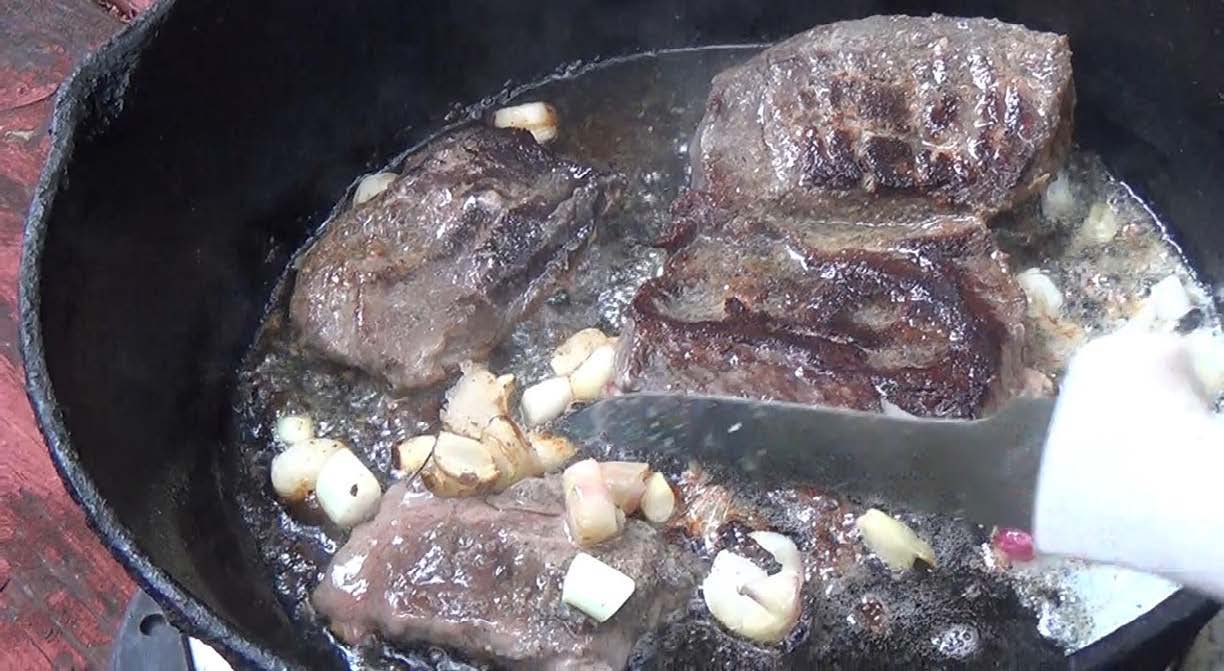 It’s fall and deer season has finally arrived. You’ve just pulled up to the old hunting cabin and you start unpacking for the few days you have eagerly awaited. Rifle, sleeping bag, hunting pack, skinning knife. Yep, you thought of everything, including a venison roast from the fat doe you took here last year.

But wait! There’s no onion or potatoes for the roast! In your haste to get to camp, you forgot the veggies. But had you planted a little “food crop” for both you and the wildlife, you’d be able to just step outside the cabin to your little “natural garden” to help grab dinner!

We’re not talking about conventional garden crops that require watering, cultivation and fertilizer. Instead, think about a couple of plants that are hardy and produce bumper crops of tasty veggies. One of the plants also serves as a great supplemental food crop for deer.

Last year, I visited Calquhoun Farms in north Texas, owned by Billy and Sharon Kilpatrick. These folks grow much of what they eat. For years, they have cultivated Egyptian walking onions and a plant called Jerusalem artichoke, sometimes referred to as a sunchoke. This past year, they began shipping sets of the plants to folks who want to start growing these hardy and tasty plants.

The more I learned about the plants, the more my interest was sparked! When I learned how mainte- nance-free the plants are, coupled with the fact that the above-ground portion of the sunchokes are great food for wildlife, I knew I was on to something good. I later learned that deer relish the tubers and will paw them out of the ground. I knew other hunters and outdoor types would also like to have a ready supply of tasty veggies on their land.

Jerusalem artichoke, (Helianthus tuberosus) is a sunflower species native to North America and noted for its tasty, edible tubers. Sunchokes are very popular as a cooked vegetable in Europe and they have long been cultivated in France as a food for both human and livestock consumption. In the United States, the plant is rarely cultivated, but those in the know plant it as a food source for themselves and wildlife as well. The tubers are very nutritious and taste much like potatoes (I like them even better) but with a sweeter flavor. They are rich in carbo- hydrates and have a high concentration of potassium, magnesium, iron, and vitamins C and B6.

The above-ground part of the plant is a coarse, multi- branched, frost-tender perennial, usually growing 5 to 6 feet tall. Deer forage heavily on the newly formed leaves which occur throughout the spring and summer. The nu- merous sunflower-like flowers, appear in late summer or early autumn. They are great pollinators, and the seeds provide food for birds, squirrels and other small mam- mals. The underground tubers are irregularly shaped, ripen in the fall and make an excellent substitute for potatoes. They can be cooked any way potatoes are prepared. The tubers are thin-skinned and are best eaten fresh because they do not store well as potatoes do.

A few turns with a garden fork in fall below the dead stalk and leaves will produce plenty of ‘chokes’ to be cooked like French fries, added to soups and stews, or even boiled, seasoned and mashed like mashed pota- toes. The tubers grow from early spring and can be eaten in their immature form throughout the summer, though they are fully developed by fall. They winter well and most folks leave plenty of seed tubers in the ground to ensure a good crop the following spring.

The tubers can either be peeled and sliced or cut into cross sections, left with the peel on and fried. Sunchokes can be planted any time of the year, but cooler fall tem- peratures with rainfall are considered best for planting. When you plant them, cut the tubers into sections, mak- ing sure each section has an eye or rhizome just like a potato that creates the new plant. In a wildlife food plot, these hardy plants spread rapidly and within a couple of years, provide a self-sustaining crop that needs no tilling or fertilizing.

Egyptian Walking Onions (allium proliferum) are ap- propriately named. These onions are highly prolific and spread rapidly. The name ‘walking onion’ comes from the fact that the onions are formed above ground, at the top of the stems. When they are developed, they weigh the stem down, touch the ground and take root, forming an entirely new plant.

These hardy onions make bulbs underground that are shaped more like large leeks than round onions. Walking onions are very hardy; they are almost as hardy as truly wild onions. Once they are established at your hunting camp, you will never have to worry about forgetting onions again. It’s nice to arrive at hunting camp with a ready supply of one of the staples of many outdoor dish- es. Like sunchokes, walking onions can be transplanted anytime, but mild conditions in spring and fall are best. The tops of the onions can be eaten green, and they give a bit of zest to salads, too.

The sky’s the limit when it comes to dishes to pre- pare with these plants. My first experiment, in keeping with the wild theme, was venison backstrap. I cooked it in butter in a cast iron skillet with fried sunchokes and walking onions. I can truly say I can’t remember enjoying a better blend of flavors. The spicy flavor of the onions combined with the sweet potato-flavored sunchokes, all sautéed with the steak, has become one of my favorite fall deer camp meals.

I have also used the onions and sunchokes in soups and stews, and absolutely love the blend of flavors they add. Another great dish to make is a big skillet of fried sunchokes topped with the walking onions. Once you try this dish, chances are pretty good that you’ll prefer it to the old camp staple of fried potatoes and domestic onions. There’s something very special about the blend of fried sweet chokes and spicy onions. The only thing missing for this camp meal is some hot buttered Dutch kettle cornbread and possibly a pot of pinto beans with thick juice!

Sharon Kilpatrick at Calquhound Farms agreed to answer any questions you might have concerning these deer camp plants. She is also taking orders to ship this fall. Feel free to email Sharon at [email protected]

Luke was raised in very rural Red River County where he grew up hunting and fishing. He began amateurishly writing about his adventures at the age of 12, the accounts of his boyhood outings often filling several pages of his Big Chief tablets. Luke began writing professionally while in his twenties and currently writes an outdoor newspaper column that runs weekly in 40 Texas newspapers.

Luke is hunting/shooting columnist for Texas Wildlife Magazine and writes regular features for several other outdoor magazines including Airgun Hobbyist where he is Hunting Editor.

Radio is a fun endeavor for Luke and his shows are known for his relaxed and down home style WWW.CATFISHRADIO.ORG Luke is on the pro staff of Airforce Airguns, Smokin Tex Electric Smokers, and TRHP Outdoors. Luke and his long time friend Larry Weishuhn also produce a bi-weekly internet radio show titled HUNTING WIRE RADIO and Sporting Classics Radio on Sporting Classics Daily.com

Luke covered hunting for the Texas Almanac, one of the oldest and most revered publications in the state. With almost 38 years under his belt as an outdoors writer, Luke has no intention of slowing down anytime soon. He continues to love the lifestyle that has been so fulfilling throughout his life.

View all posts by Luke Clayton